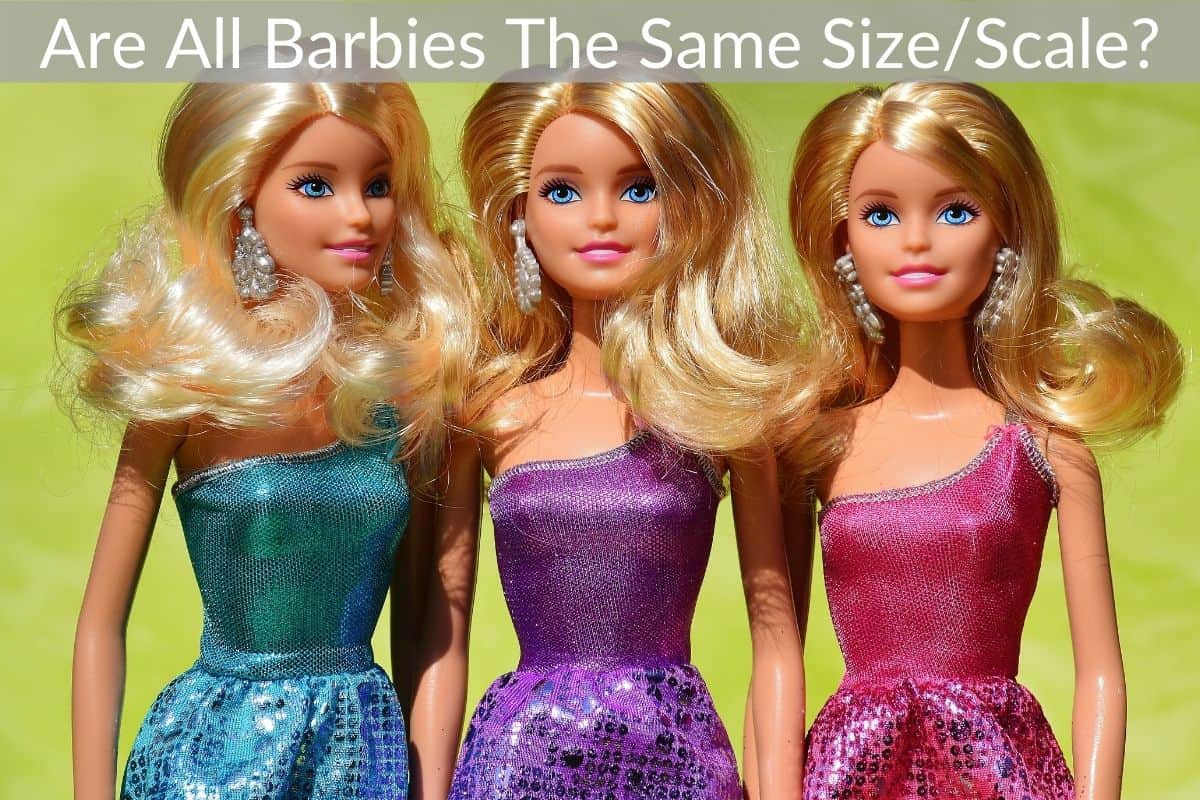 Barbie is a fashion doll manufactured by Mattel. The first Barbie doll was manufactured in 1959, at a time when most dolls were being made to look like infants. The original Barbie doll was actually modeled on the idea of an adult but is now often portrayed as a teenager.

The Barbie doll first went on display at the 1959 American Toy Fair in New York City. Since then, the Barbie doll has evolved and her shape and size has changed over the years.

Because of the many changes to the Barbie doll through the decades, you may ask yourself, “Are all Barbie dolls currently the same size or scale?”.

The diversity of Barbie dolls has recently been looked at critically by women’s groups and the manufacturer itself. Because of this, Mattel has started manufacturing even more Barbie Dolls that reflect diverse body types, skin tones, face shapes and hair textures.

The Playscale universally accepted scale for toys is 1:6. If you accept this ratio, you can multiply an original Barbie Doll’s measurements and determine what her lifesize equivalent would be.

This would equate to her chest being 39 inches, her waist would be 18 inches, her hips would be 33 inches, and her shoes would be size 3. She would essentially be 5 feet and 9 inches tall, weigh approximately 110 pounds, and have a BMI of 16.24.

The 1:6 ratio for Barbie Dolls is the standard for the dolls, but through the years the manufacturer has released many “friends” of the Barbie Doll that may have been slightly smaller than the standard Barbie Doll.

What Are Some Of The New Versions Of The Barbie Doll?

In recent months Mattel has started manufacturing some new versions of the Barbie doll.

This shift in production is wonderful because now even more children can relate to the sizes, skin tones and hair types of the Barbie doll.

All of these new versions are designed to be more inclusive and help to present the idea that no single body type is the right one. Of course some people still say that Mattel hasn’t gone far enough in their inclusivity but at least this is a step in the right direction.

Who Are The Friends Of The Barbie Doll?

Through the years there have been over a billion Barbie dolls sold, with 350,000 being sold in the first year alone. Some of these include the numerous friends of the Barbie doll.

Some of Barbie’s friends have been slightly smaller, but most are the same size as Barbie. Some of the friends she has had over the years have included: Midge, Stacie, PJ, Christie, Skipper, Tuttie and Ken.

Many of Barbie’s friends have even had their own friends. Some of these have included Kevin (Skipper’s friend), Melody (Midge’s friend), Janet ( friend of Stacie and Whitney) and many many more.

It’s certainly possible that there will be even more friends (or friends of friends) of Barbie in the future as well.

The standard height of an original Barbie doll is 11.5 inches. So if there is a standard size for most normal Barbies does that mean that they will all fit in the same clothes?

Most of the clothes made for an original Barbie doll will fit on virtually all Barbie dolls. The only exceptions are the petite, curvy, and tall Barbies as well as Barbie’s friend.

Since some of Barbie’s friends are a bit smaller then normal Barbie clothes would be just a little too large.

The original clothing for the Barbie Doll manufactured in 1959 was a black and white swimsuit. The accessories for the original 1959 Barbie Doll were white sunglasses and hoop earrings.

Some of the early pieces of Barbie clothing were even hand sewn.

The more recent diverse Barbie Dolls will be manufactured in various shapes and sizes, so the clothing made for an original Barbie doll will most likely not fit these newer Barbie dolls.

This change in Barbie doll shapes and sizes will be a good opportunity to add more accessories to the wardrobes of the Barbie dollars that you purchase.

The plan is for these new Barbie Dolls to be sold together as a group. This will also give the opportunity for more imaginative playtime.

What Is The Height Of The Smallest Barbie Doll?

The smallest Barbie doll stands less than 3 inches tall (or 7.6 centimeters). This doll was manufactured in 2 styles: The original 1959 signature style, and the Malibu Barbie style of 1971.

This small Barbie doll came with just one accessory, and that was a pair of sunglasses.

What Is The Height Of The Tallest Barbie Doll?

Now that we know there is actually a tiny Barbie that comes in at under three inches you might be wondering if there are larger Barbies as well.

Even when these dolls were first manufactured, they were quite pricey.

It wasn’t unusual for the grandparents to give these as gifts to children for a special occasion like a birthday or Holiday. For this reason many of the My Size Barbie Dolls have remained in families for many years.

What Year Did Barbie Change Size?

Barbies had been the same size for many decades but they were changed to become more inclusive and allow the children that played with them to feel more comfortable with their bodies no matter the shape and size… but when did this happen?

Originally in 1998 Barbie got a new body. At 38 years old her shape was redesigned to reflect the fashion of the time. It wasn’t until 2016 that the Barbie Doll body size changed again.

1998 is when Barbie dolls were first changed to have a slightly bigger waist with smaller hips and a smaller bust however the changes were not very drastic and most people feel like this was just a fashion change not one about inclusivity.

2016 is when the curvy, petite, and tall Barbies were released which is partly why so many people were upset with Mattel. Why did it take them almost 60 years to make a Barbie that wasn’t a stick figure?

Currently the average cost of a Barbie doll whether large or small is around $9.99. This could really vary, depending on the region of the country where the Barbie doll is being sold.

Typically Barbies will all be the same price whether they are one of Barbie’s friends that is a little bit smaller or an original Barbie.

Because the average cost of a Barbie doll is so affordable, it makes for a wonderful toy for many children. Barbie is once again becoming more popular, so more children are looking for accessories like houses, vehicles, clothing, food, pets, furniture, and even books and movies that are all about their Barbies.