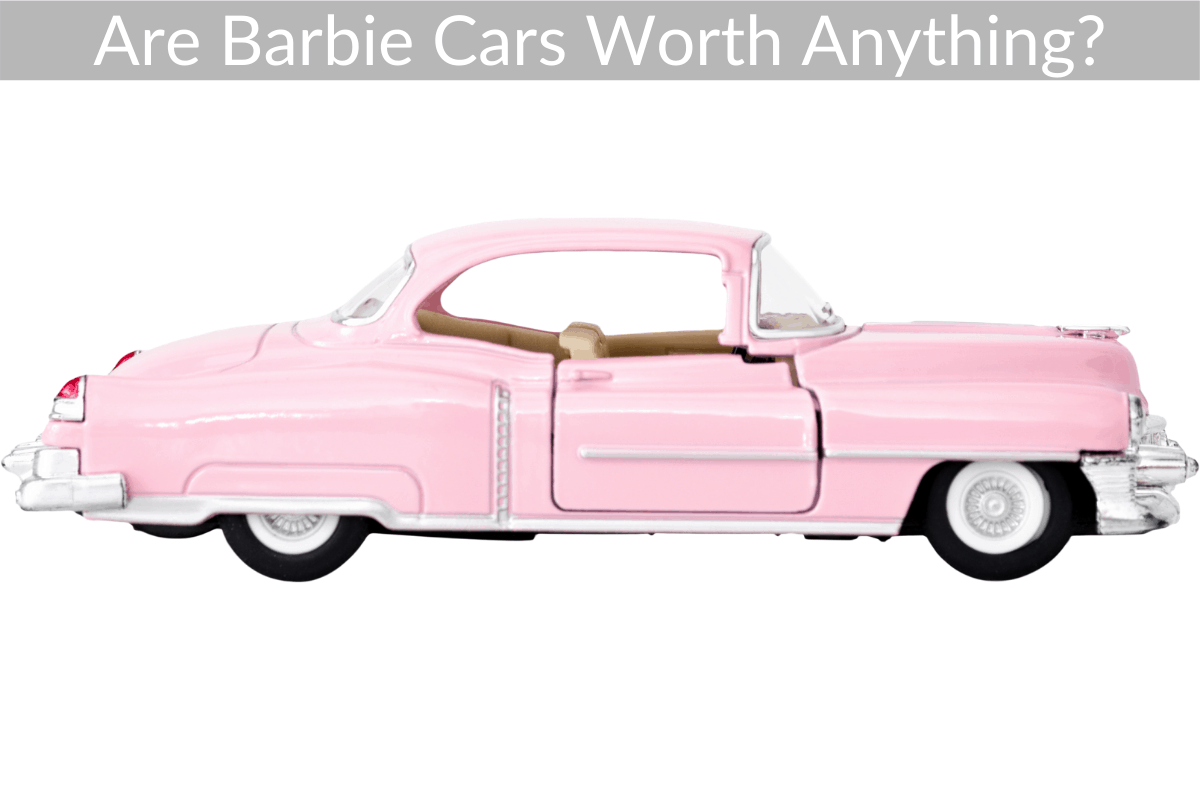 Barbie is a type of fashion doll that Mattel produces and distributes all across the US. Mattel doesn’t just make Barbie dolls either, they make many other items like clothing, accessories, houses, and even cars!

Since Barbie cars have been around since 1962 there are tons of different models that are around but are any of them actually worth anything?

Some of the vintage Barbie cars can sell for hundreds of dollars each (depending on condition) with the rarer ones going for well over $500!

I would say they are definitely worth something!

Barbie cars come in many different varieties especially since they have been selling for almost 70 years! Some specific Barbie cars include Volkswagens, Jeeps, Corvettes, and many other types of cars.

The first car Barbie drove was a British Austin-Healey roadster vehicle. After that, the company introduced many different series of cars for Barbie. However, none of the later Barbie cars look quite as good as the classic models.

To look at the most popular Barbie cars on the market you can click here.

What affects how much a Barbie car is worth?

Of course, Barbie cars are worth something and as mentioned above some are worth quite a bit, however,there are many different things that affect the value of all collectibles and Barbie cars in general.

You can sell your Barbie cars at many different places whether locally or online however it’s important for you to know what factors affect the value of your Barbie car before you decide to sell it.

The following are the things that your buyer will evaluate if you intend to sell your Barbie cars to them.

If the Barbie car is in really bad condition then there is a chance that your car may not be worth anything at all. Still, some local collectors may be willing to purchase it from you at a low price and then try and restore it and make it look like new.

Another large factor that goes into whether your Barbie car is worth anything is how rare it is. If there were millions of a specific Barbie car produced then it will likely never be worth anything no matter how good of condition it is in.

Rarity or unavailability of a specific Barbie car is incredibly important when it comes to the value that you could expect to get. The older the Barbie car is the higher the price typically will be because they become more and more rare.

If the demand on the market goes down or there are many Barbie cars on the market at the same time it will cause the value to drop quite a bit and even make it difficult to sell the Barbie car at any reasonable price.

This is exactly what has happened with Sports Cards from the late 80s through mid 90s. There were millions of them made and everyone thought they would become valuable so they weren’t destroyed or damaged. Now there are millions of Sports Cards that are 30+ years old and are still virtually worthless because there is far more supply than demand.

Rarity works exactly the same in regards to Barbie cars as it does with any other collectible. The rarer the item the higher the value, the less rare it is the less valuable it is as well.

What are the best Barbie cars that are worth something?

Having six color varieties like pink with blue, pink with white, green with cream, red with white, yellow with blue interior, and orange with blue, the Austin Healey cars had an exquisite design. In addition to beautiful features, these cars had chrome-like accessories, clean and clear plastic windshield, and free-rolling wheels.

The original Austin Healey cars of 1962 are still quite expensive so if you have an Austin Healey Barbie car, you will likely be able to get at least $250 from collectors.

These classic silver and tan-combo cars were great sources of luxury for your Barbie, despite the fact that it didn’t have any roof. This German roadster had two basic colors: orange and turquoise. Based on these colors, the company launched different variations.

You can sell or buy a Barbie Mercedes-Benz 190SL for anywhere between $25-200 with the price difference being depending on if the condition of the car is good enough.

Throughout the years, Barbie has had a lot of camping vehicles, including a 3-foot traveler. The most successful camper vehicle by far was the Country Camper. This vehicle was large enough to accommodate all of Barbie’s friends for a trip. You can sell or buy this car for $25-$50 normally so it’s not as valuable as the model mentioned above.

This Corvette came in purple or pink, and had a white interior. The red European Corvette also did great, but Americans liked this model much more than the red ones. It also does not have any sophisticated stickers.

This model has recently sold for between $50 and $200 which of course depended on the value and whether it includes all of the original items and box or not.

After getting a purple Dony and Marie Osmond van, a remote control Corvette, a Jeep, the Volkswagen Golf, and a lot of other vehicles, Barbie received a red-hot, bright Barbie Ferrari. Its white version also came later.

The plastic version of the Barbie Ferrari has a worth of $25-50 if it is in good condition. In excellent condition it can be worth even more.

This pink or turquoise car is a convertible and definitely a classic. Moreover, it has wonderful wheels, seat belts, and chrome details too. You can get or sell this car at between $80-125. It is a handsome amount you get if your Chevy is in excellent condition.

This German Sportscar is either white with pink interior or pink with white interior. In addition to colors, this car has headlights that actually work as well.

It’s fair market value is $25-75 so if you happen to have this model that is about what you would expect to get from it.

Although Barbie cars have been around for almost 60 years there are still people who love and collect them which means that they are still valuable.

In other words, you can sell or buy them from collectors or vendors as you choose to but some are worth more than others.

These cars do all have some worth because of their aesthetic designs and remarkable features but many of them aren’t worth the cost to ship them out (assuming you sell them online).