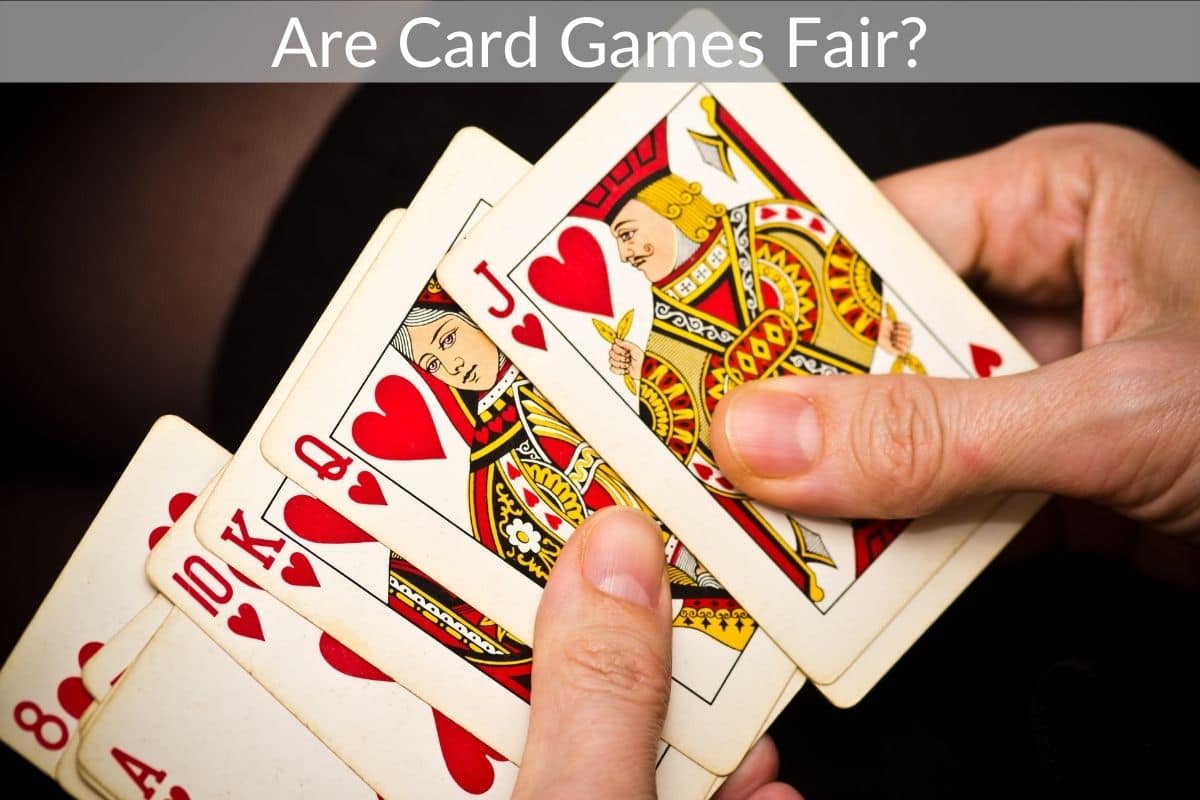 You might have played one or many card games to kill some time or have some fun with friends. Card games have been around for a very long time; they date back many thousands of years (for normal cards).

When playing a game of cards with your friends you might wonder if the game is actually fair or whether it is rigged in someone’s favor.

In general card games are fair and even card games played at casinos aren’t rigged (although the house always has an advantage or takes a portion of the pot). Luck does play a significant part in who wins however.

There are countless card games, and in recent years, we have seen some significant evolution of these card games. Card games started with a simple deck of 52 cards, but now we have card games like UNO and Cards Against Humanity, which center around unique cards and can only be used for a single type of game.

All of these card games are fair although luck has a great part in who wins. If you’ve ever watched poker games you have likely seen a “bad beat” that doesn’t mean that the game wasn’t fair but just means that the person who statistically should have won a hand didn’t.

The generic deck of 52 cards is still a staple in gambling arenas and casinos since it’s a very standardized deck. The recent burgeoning of card games raises the question, are card games fair?

I will go into more details about card games and whether they are fair or not in the rest of this article.

Are All Card Games Fair?

It’s essential to note that there has been a lot of research into card games and their fairness. If we look at it from a statistical standpoint, you’ll see that the odds are pretty much the same for all kinds of card games and that they aren’t rigged.

However, there is an element of luck that comes to play in most card games and some games are purely based on luck. Researchers argue that winners think that card games require skill and strategy while most losers think a card game is simply about the cards that they’re dealt in that round.

Some people think that while card games require a certain amount of strategy, it takes a back seat to chance and hence, luck.

When drawing cards, you have to hope and pray you can turn your cards around rather than coming up with a strategy to move forward. There is also the fact that most trading games involve the introduction of new cards very rapidly. So, the factor of chance is too great for one person to play a part in the card games fully.

Conversely, some people argue that any card-playing requires a certain amount of skill and proper knowledge of the rules to win. The same people state that since chance is being introduced equally to all the players at all times, we don’t need to consider the factor of chance in the game.

In trading card games, where you have to build a deck from scratch, the chance is limited even more. There is a great amount of skill required for making a set from your cards, like in Bridge.

So, people argue that chance is limited here as compared to skill.

This skill also makes people win with certain decks, as the probability of success increases with that deck of cards. However, there’s still a chance for it to go wrong if the players don’t have the skills and strategy to push them through.

How Do Card Games Work?

At casinos, card games are played by using a card shuffler to maintain as much fairness as possible.  A card shuffler is an automated machine that shuffles cards and dispenses them out for a dealer to use.

The card shuffler goes through several regulatory bodies before it is approved for shuffling. The board of inspectors ensures the card shufflers are fair and don’t harbor any bias against any player.

These shufflers are programmed to limit bias, so the board of inspectors tries multiple ways to ensure that there’s no tilt against any players.

There is the possibility of casino equipment being rigged, so it turns against the players, but this isn’t something that happens in most casinos.

Card Shufflers are supposed to be random along with card distributors so that there are equal chances for all the players at the table. There are fewer chances of bias in a Casino since no casino would want to put its reputation on the line for a quick buck because once news spreads about games being rigged, the casino will lose all of its traffic.

Thus as far as casino card games go, they are as fair as they can be. Some researchers state that in casino card games, the house has a certain advantage. This advantage is because they’re the ones setting up the game.

So, they may have a certain edge over the rest of the players but that doesn’t mean that the game is “rigged” or not fair. It is simply the way the game is set up and played.

What Are Card Games?

Card Games are games with the primary device as playing cards. The playing cards are identical in size and shape.

Each card generally has two sides — the face and the back.  The backs are designed to be indistinguishable as card games often involve a lot of guesswork. This guesswork is what brings more of a thrill to card games.

The face of the cards is generally unique. However, they may have similar elements to other cards in card games like UNO and Go Fish, where the premise of a set is similar.

Certain card games work with a board. Examples of such card games are Monopoly, Settlers of Catan, etc.  In such games, cards are devices that propel the game forward or create hurdles for the players.

For any card game to be worth your while, you need to feel like it’s incorporated with a sense of fairness. There’s no point in playing a card game that is rigged against you.

However, there are certain card games where rigging causes more harm than just a bruised ego. Most gambling rings and casinos use card games to bet money. This fact means that if your card game is rigged, then you’ll likely lose a lot of money.

Card games introduce a fair amount of chance, and thus there are questions regarding their fairness. While some think that the level of chance in card games leaves no room for any actual skill, others think the skill for card games is gleaned because of the significant degree of chance it introduces.

There may be greater chances of bias in a friend group where the dealer may want one party to win. However, in professional areas like casinos, this bias is limited by special machines.