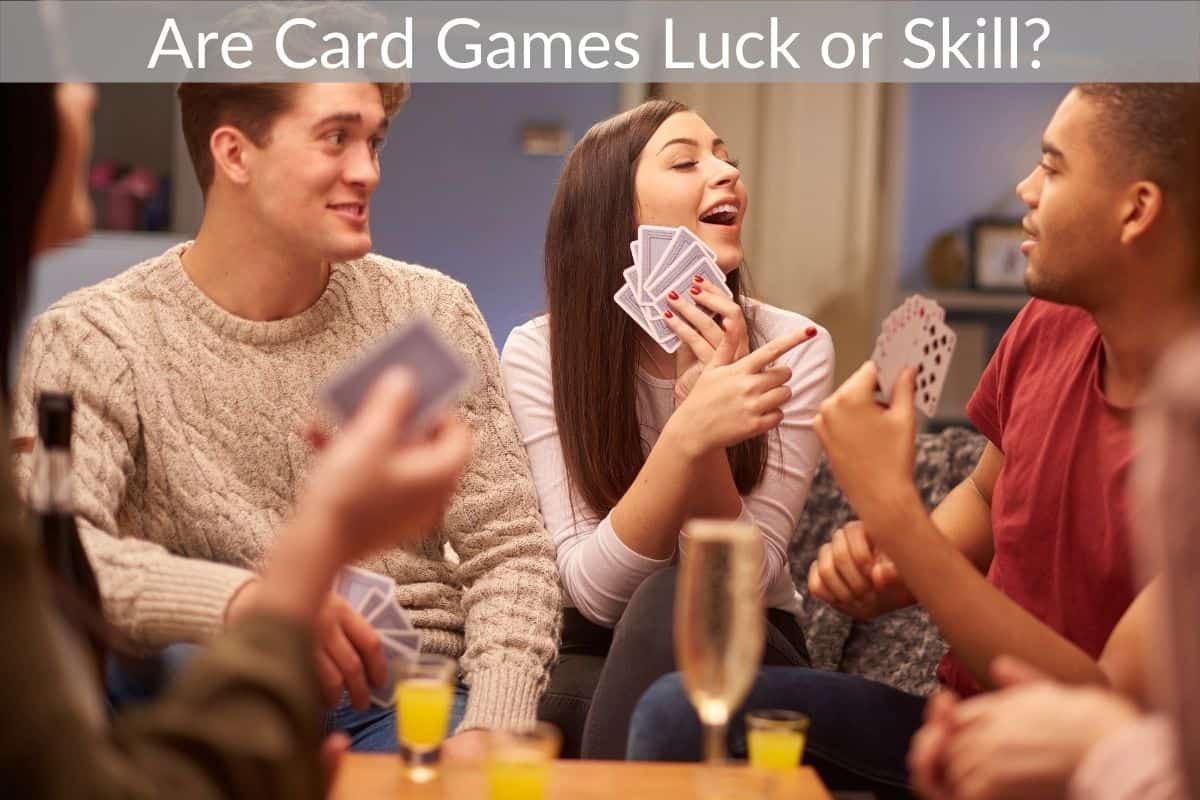 Do you keep losing card games despite thinking that you are pretty good at them? Are you wondering if there’s something more required to win certain card games? Well, you certainly aren’t alone wondering this about card games.

Many claim that winning at card games is all about luck. However, many skilled players have shown the world they can turn the worst cards into a winning game.

While nobody has figured out how to get lady luck on their side, there has been much debate on what’s required for winning card games.

Every card game requires a bit of luck as well as skill. Your skill ag the game can tip the odds of winning in your favor but someone can also get lucky and beat you despite the odds.

Overtime skill will eventually beat out luck if enough cars games are played but at any time any player could get lucky and beat someone who they rightfully have no business beating.

In the rest of this article I will go into more details and discuss the role of luck and skill in different card games.

To see the most popular card games on the market just click here.

Role Of Skill In Card Games

Some say that card games are all about skill. Now, skills for every card game are acquired through practice. However, everyone develops these skills differently.

While there are some defined rules for every card game, each player adopts them into their gameplay differently. It is what makes every card game challenging.

To be skilled at card games means to have a mathematically sound understanding of the game’s rules. Most card games require good math skills and good strategic thinking to become skilled at them.

Card games, unlike other games, can be unpredictable. One can never know what cards their opponents have in their hand. Even if someone finds this out through cheating, they can never know which card the opponent will decide to play.

But some people just call that skill ‘practice.’

Role Of Practice In Card Games

As with every game, practice leads to developing skills. But when it comes to playing cards, practicing alone is not enough.

Since every card player plays them differently, one who wishes to practice playing cards needs to play them with as many people as possible.

Practicing playing cards with various opponents can also teach you what cards are good to begin the game with, what cards to hold on to, and in some games, how to put on a poker face.

Playing cards is not only about dealing with cards. A big part of many games is bluffing and faking one’s status in the game, which only comes from practice.

It is why the more two opponents practice playing cards with each other, the more challenging their game becomes.

With every game they play, both players pick up on their opponent’s strategies and behaviors about the game. With time, it becomes harder for them to hide their bluffs and lies.

However, practicing a card game with many opponents and learning and picking the most impressive tricks can help one win against newer opponents or teach the game to novice players.

Role Of Luck In Card Games

The number of people who believe card games to be all about luck is as high as those who believe them to be about skill. But it all depends on which card game one chooses to play.

While luck plays a loud and clear role in affecting the results of most board games, it can also play a subtle part in impacting the result of a card game.

Card games with a point system tend to have a high chance of being influenced by luck. Uno is a classic card game where one can be a winner if they end up with the right cards.

The example of the card game hearts is opposite of Uno. In hearts, one has a high chance of winning if they have cards of low values.

While they require the player to use their knowledge of winning tricks of the game, such games hardly emphasize strategies and are blatant about keeping it less controlled and wilder.

Some card games, such as solitaire, can even get stuck at times with no possible moves forward.

A poll, which was about people’s belief in skill, practice, or luck to win card games, conducted in the year 2020 showed some interesting results.

Most people believed that relatively easier card games such as Uno, Go Fish, and Cribbage require less than 30% skill. Uno and Go Fish were the games that people believe are mostly about luck and less about skill or practice.

While people didn’t believe skill to be the major factor in determining the winner of Cribbage, they didn’t believe it to be luck either. An average number of people voted for Cribbage to appear to be a game won with practice.

Bridge, popular among older players, is a card game that most people believe to be least influenced by luck. Most believed that while practicing the card game can help one win; being skilled at Bridge confirms the player’s wins.

According to the poll audience, Rummy is influenced by skill as much as Bridge, but luck is an equally strong influence.

Poker was the card game that was most believed to be influenced by skill the most. However, the number of people who believed it to be based on luck was also high.

Ultimately, all card games require both luck and skill. Although skilled players will win more games over time a beginner can easily get lucky and beat a pro player at any given time.

You can shape your own personal opinion after reading about other people’s opinions on the role of luck and skill at card games. It can also help you choose which games you want to play.

If you are a fan of luck, then you can try your hand at those games that are most influenced by luck. If you are more interested in developing strategies and predicting your opponent’s moves, then you can pick a game that requires more skill to win.