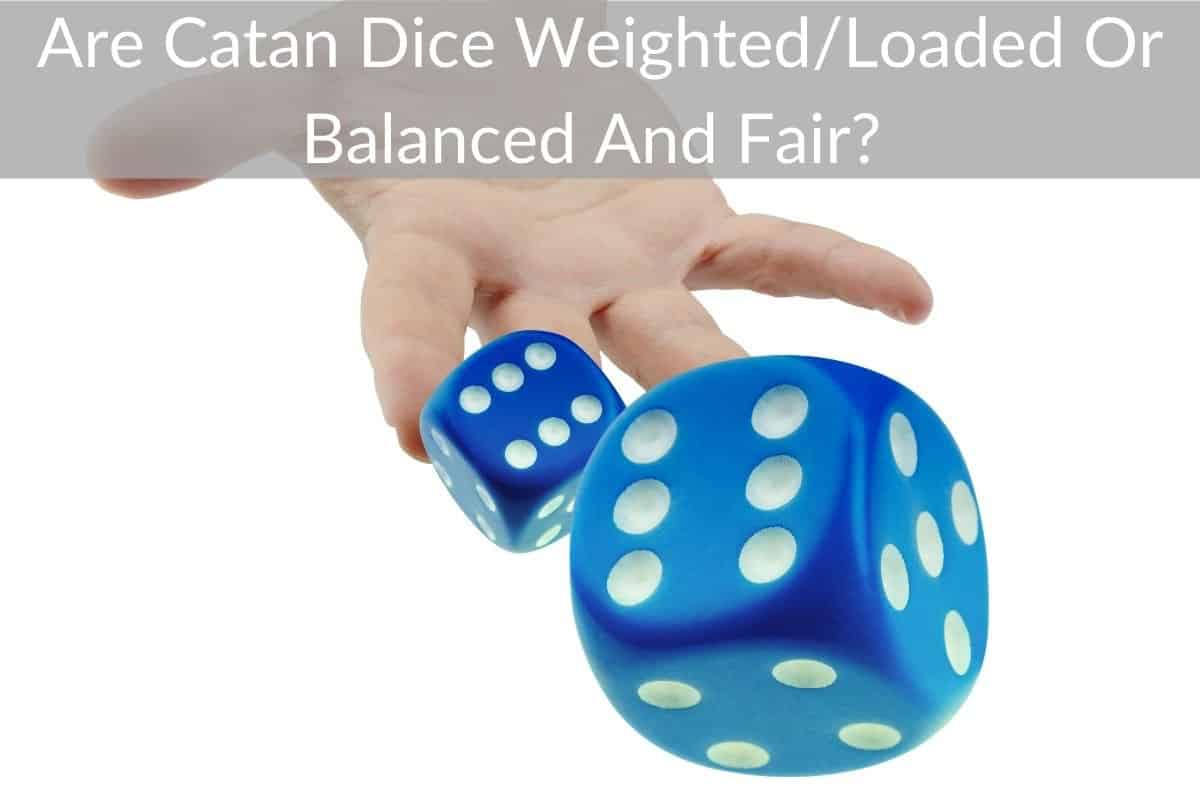 Catan is a strategic game that allows players to trade resources, build roads, and create settlements. Dice are used to determine the player’s moves and what roads are used the most.

The board is labeled with pips. These pips let you know the numbers that you will most likely roll throughout the game.

Do these pips mean that the dice in Catan have been weighted?

The dice in Catan are not loaded. The pips indicate the numbers that might be rolled the most. The odds of rolling a two or twelve aren’t as likely as rolling some of the other numbers like a six or seven.

You have more variations to roll with a two or six rather than just two ones or two sixes (with the number 2 or twelve).

While Catan may be a strategy game, there is a bit of luck when it comes to the roll of the dice.

What Happens When You Roll Doubles In Catan?

Is there any sort of special rule for rolling doubles in Catan?

There is no specified rule for rolling doubles in Catan. If you roll doubles, your turn is simply over and it is the next player’s turn.

Some play with “House Rules” that state if you roll doubles three times, you need to hand over your resources. This could end up devastating whoever rolled the three doubles so it is not an official rule.

This is just a rule that some people play to make Catan a little more interesting.

How Can You Win In Catan?

Catan is a fun game but also has a lot of moving parts. It can be overwhelming when you are first learning how to play.

There is always that one friend or relative that seems to win every game. They seem to play effortlessly and always manage to win.

Catan is a strategic game with just a little bit of luck. If you play your cards right and stick with these strategies and tips, you will be the one to beat.

Here are a few tips to help you win the next time you play Catan.

Gather One Of Every Resource

You are eventually going to need all the resources throughout the game, so why not make sure that you start with them? When you place your first settlement you should receive three different resources.

You can get the last two with your last placement.

Different numbers tend to come up more often in Catan than others. Place your settlements according to these probabilities to maximize your earning of resource cards.

The best way to maximize your odds is by avoiding the desert and the coast.

If you are one of the last to choose, you will end up with poor options for settlements. If your options are coastal, be sure to choose the coast with a port and two adjacent hexes.

It is also best to match your coastal option with your best resource-gathering tiles.

Your goal should be to get close to the same number of pips in wood and brick; the same goes for ore and wheat. If you pair your resources of wood and brick you will get an instant road every time a nine is rolled.

Always think about expansion when placing your roads. Point your roads in the direction of where you are looking to expand. Someone is bound to create the 5/9/10 road, so you can focus more on roads like the 4/9 port.

Road placement does get easier as the game continues. If you do not plan on building a long road, be sure to fork your road. This will allow you to branch-off two settlements at the cost of two roads and not three.

Wheat is used in three different builds; this is the resource you must gather to have a chance of winning. Ore is also another powerful resource, without it, it’s almost impossible to win.

Ore can only be used with wheat, so be sure to keep an equal amount of wheat and ore in your resource piles.

If you need some sheep to establish your settlement, trade before building the road. Once you place your road, your opponents can see which settlement you are trying to reach.

They will be less likely to trade with you when they see where you are going to place the settlement.

Use The Robber To Your Advantage

There are three different ways that you can play the robber to your advantage.

Always use the robber on the strongest opponent. It is best to avoid making more than one opponent your enemy.

Always move the robber to the same person throughout the game, this way you can have allies to trade resources with.

Block what your opponent needs and not their strongest tile. For example, your opponent has a city with 8 ore that has been hit twice, that seems like the best target, but it isn’t.

You should block their city of wheat since they can’t play the ore without the wheat.

If there is no clear threat and everyone is on an equal playing field, play the robber on the opponent to your right. This means that the robber will stay there for quite a while without any retaliation.

When the robber is moved, it will be your turn next and you can recuperate rather quickly.

Be sure to place the robber on a resource that you already have plenty of. This way, your opponents will more likely need to trade with you since you have the item that they need.

Additionally, never set the robber on a resource that you need. You want other people to gather that resource so they will be able to trade with you.

Next time you play Catan, you can rest assured knowing that the dice are not loaded. The game board is just designed to help you know which numbers are more likely to pop up when rolling.

If you do end up rolling doubles, don’t get too excited. Unlike Monopoly, rolling doubles in Catan isn’t as exciting. You only get one roll per turn no matter what numbers show up on the dice.