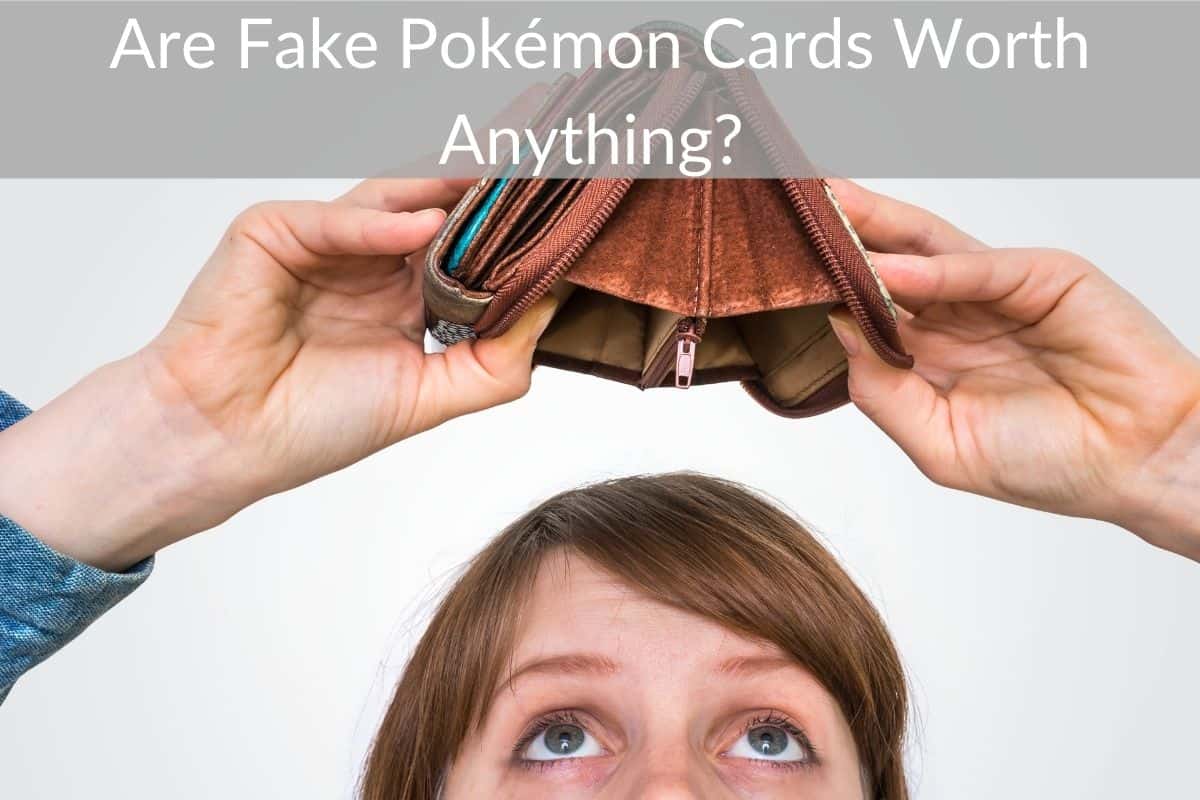 Pokémon may just be the trend that never fully goes out of style. Just like any other trend, Pokémon goes through its stages of popularity.

One thing is for sure, Pokémon is here to stay.

As people become more and more interested in Pokémon and all its merchandise, how can you know for sure if your cards are real or fake?  If you do end up with fake Pokémon cards are they even worth anything?

Fake Pokemon cards are worthless as a collector’s item however they do have some value in that they can be played with. You can use fake cards to play the Pokemon card game with your friends.

Logan Paul almost ended up purchasing $35,000+ worth of fake Pokémon cards. While he was opening the packs online, he discovered that they were not the first edition cards he was expecting.

They were in fact fakes. He did not end up purchasing the box of Pokémon cards because they were not the originals.

So as you can see fake Pokemon cards aren’t worth it to collectors.

Logan Paul walked away from the box of fake Pokémon cards since there is no value. This does not mean that they are not useful.

If you just want to play with your friends and don’t want to spend a fortune on Pokémon cards, fakes might be the way to go. However, if you are interested in being a serious collector and building up your Pokémon card collection, fake cards are not worth the purchase.

Also, if you ever intend on entering tournaments, fake cards are not allowed and hold no value at all since you can’t even play with them.

How Can You Tell If A Pokémon Card Is Fake?

Each game uses different strategies to beat your opponents. How do you know if you have been sold or playing with fake Pokémon cards?

Here are a few tips to help you determine whether or not you own fake Pokémon cards.

Does it have an accent mark over every letter E?

One of the easiest ways to tell if a Pokémon card is real or not is to check all the E’s in the word Pokémon. In Pokémon, the letter e always has an accent mark over the top. If any of those accent marks are missing, the card is a fake.

Does the Pokémon actually exist?

There have been several cards produced with Pokémon characters that are not actually in the Pokémon Universe. You may think it is easy to spot a fake character, but as Pokémon become increasingly popular many new characters are being created.

Make sure that all your characters are those that actually exist in the Pokémon world.

Does the card have spelling or grammar mistakes?

A real Pokémon card will typically not have any grammatical or spelling errors. If there are any mistakes on the card look for other signs that this could be a fake.

Typically none of your real Pokémon cards will have any spelling or grammar errors. This isn’t to say that all cards are perfect.

There is always the chance of human error when writing the descriptions on the Pokémon cards. If there are any errors on the card, there could be a chance you have a misprint.

Most misprints are accounted for and can be found online.

Does the card feel right?

Pokémon cards are constructed with a thicker card material. If your card doesn’t feel as heavy as the others, this could mean you have a fake card.

Pokémon cards are made with better, thicker materials so they last longer and through several rounds of gameplay.

Does the card have a reasonable amount of HP?

The HP on a Pokémon card should be reasonable. If your HP is somewhere in the thousands, your card is most likely a fake.

Is It Illegal To Sell Fake Pokémon Cards?

With all these face Pokémon in circulation, you may want to think about getting rid of yours. Is selling your fake Pokémon cards illegal?

Selling fake Pokémon cards is illegal. If you feel that you have received a fake Pokémon you can notify your local authorities; they can decide how to proceed from there.

The cards were made up of the original 24 Pokémon and Pikachu. Each card is also stamped with a special 25th-anniversary stamp.

There are 50 cards total in the limited edition packs. Each of the 25 Pokémon also has a holographic counterpart card that makes the 50 cards.

Just like any other toy that comes in McDonald’s Happy Meals, you were able to purchase the cards themselves without purchasing a meal. Because of the ever-increasing popularity of Pokémon cards, many restaurants ran out of the cards.

With all the detail and thought put into these 25th-anniversary cards, are McDonald’s Pokémon cards real, and do they have any value?

The cards that McDonald’s produced are real Pokémon cards. Since these cards are limited edition and also tied with Pokémons 25th anniversary, some of the sealed boxes can go for around $600 to $1,000.

Pikachu is the highest-priced card at close to $50 for holographic and around $30 for non-holographic.

Here is a list of all of the cards and in what pack they were released in for the special 25th anniversary of Pokémon by McDonald’s.

Whether you decide to collect Pokémon cards for fun or tournaments, be sure to keep your eye out for the real deal. If you do come into contact with some fake cards be sure not to resell them, as that is illegal.