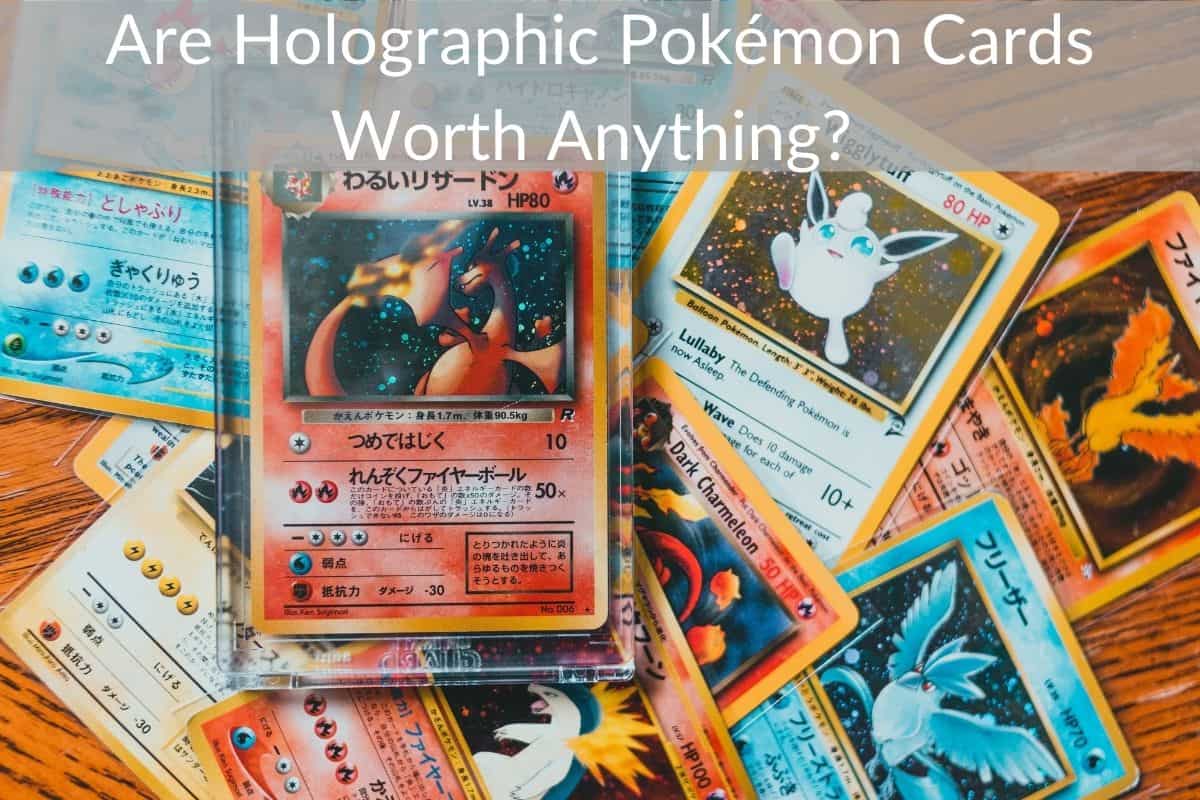 Pokémon cards have been popular since they were first created in December of 1998. In the Pokémon trading card game players become Pokémon trainers.

Players will use their Pokémon to attack their opponent’s Pokémon. When a Pokémon receives enough damage, they then get knocked out and the player who knocked him out gets to draw a prize card.

The person who draws all six prize cards first, wins.

A Holographic Pokémon card is a card that has a holographic picture that gleams and shines. Only a small number of rare cards in a set will get the holographic variants.

These holo rare cards can be collector’s items but are they worth anything?

Holographic Pokemon cards are worth something but what exactly they are worth will vary depending on the rarity of the card as well as the condition.

Specific holographic Pokemon cards can be worth thousands of dollars while others are only worth a couple of dollars. I will go into which holo cards are worth the most later in this article.

To see the most popular Pokemon cards and sets just click here.

What Holographic Pokemon Cards Are Worth Money?

As I mentioned above the value of specific holographic cards will vary depending on which card it is as well as its condition. A card that is in good condition and has been graded can be worth 10-100x more than a card in poor condition.

Below are some specific holographic Pokemon cards and what their current value is.

This card has an estimated value of $24,000. This first edition Pokémon card is probably the most valuable of all the holographic cards.

In the 90s this dragon made its first appearance in the Pokémon Red and Blue video games. He was on the cover of Pokémon Red.

Being on the cover got him a lot of exposure which increased his popularity. Charizard has flying abilities and an over-powered fire ability as well.

Blastoise was also introduced in the Pokémon Red and Blue video games. He was the final evolution of Squirtle.

Squirtle was one of the original starter Pokémon in the game.

Blastoise has twin water cannons on the shell on his back which delivers powerful blasts of water with incredible accuracy. Blastoise was the cover art for the Pokémon Blue video game.

This card can bring in up to $3,500. This first edition card is of a normal type Pokémon who is very difficult to catch. His short legs can move pretty quickly.

This Pokémon’s special move called “soft-boiled” helps to heal other Pokémon and people.

This holo card has an estimated value of $3,250 for a mint condition card. Hitmonchan is a fighting type Pokémon which is fairly easy to see with his boxing gloves and shoulder pads.

He’s a quick Pokémon with moves such as “jab” and “special punch.”

In mint condition this card can bring in $3,000. Grabbing one of Ninetales golden-white tails is said to bring a thousand-year curse to the person who touches it.

This Pokémon was inspired by a creature called Kitsune from Japanese folklore. It has moves such as “fire blast” which causes 80 damage to it’s opponents.

In mint condition this holo card can go for as much as $2,800. Alakazam is the final evolution of Abra. His signature move “kinesis” reduces the accuracy of his opponent’s attacks.

Raichu is an evolved form of Pikachu and is an electric type Pokémon. Raichu has moves like “agility” and “thunder”

The “thunder” move causes 60 damage to it’s opponents but you’ll need to flip a coin when performing this move. If the coin lands on tails, Raichu will do 30 damage to himself as well.

A mint condition, first edition holographic Raichu has an estimated value of $2,500.

The legendary Mewtwo is considered one of the best Pokémon of all time. This psychic type Pokémon was created by a scientist who was splicing genes.

Its signature move “psystrike” uses its psychic powers to cause physical damage to its opponents.

A mint condition first edition holographic Mewtwo can be worth as much as $2,000.

This card can bring in $1,500 if it’s in mint condition. Poliwrath is a dual-type Pokémon. He is both a water type and a fighting type Pokémon.

He can swim for long distances and even run on water for short spurts of time. This blue Pokémon has a black and white swirl on its belly.

This card is worth $750 while a first edition of Dragonair, it’s evolved form can be worth $750 as well. Neither of these cards are holographic but they can still bring in quite a lot of money.

How Do I Know If My Pokemon Cards Are Worth Anything?

Now that you know Pokémon cards can be worth quite a bit of money, you probably want to know how to find out how much money your cards are worth. Before you try to sell any of your Pokémon cards you need to first value them.

Once you know what you’re looking for, Pokémon cards are pretty easy to value.

Both of these types of cards are fairly easy to find unless the card was printed in 1999 or 2000.

A black star in the bottom right-hand corner means that that Pokémon card is rare. If it has a star H or three stars it is a special, extra-rare card. These cards are the ones that are probably going to be worth the most money.

You will want to set these cards aside so that they can be preserved.

Any first edition card has the potential to be worth money, even if it is a common card. These cards will have been printed in 1999 or 2000.

Any card that says “Wizard of the Coast” will have been printed in 1999 or 2000, these cards deserve some extra attention.

Many first edition cards can be sold for $5, even the common ones but a “Wizard of the Coast” card that is rare can go for as little as $100.

To know if your card is a first edition you just need to look for the first edition stamp. This will be a “1” inside of a black circle with lines radiating out of it and be located just below the artwork and to the left.

These cards could be worth anywhere from $5 or $10 to several hundred.

If the collector number has a SH before the number that means the card is a “shining Pokémon” or reverse holographic Pokémon. These cards have different artwork than their regular version.

If you can’t find a collector number it is probably one of the early print Pokémon cards and will be worth looking into.

After you have valued your cards, you can then price and sell them. To price your cards just find a Pokémon -selling site or even use eBay. You can also check with more experienced collectors to see what they think the value of your cards are.

Some Pokémon cards will drop in value when they are no longer playable in tournaments however for collectible cards not being able to be used in tournaments won’t matter very much.