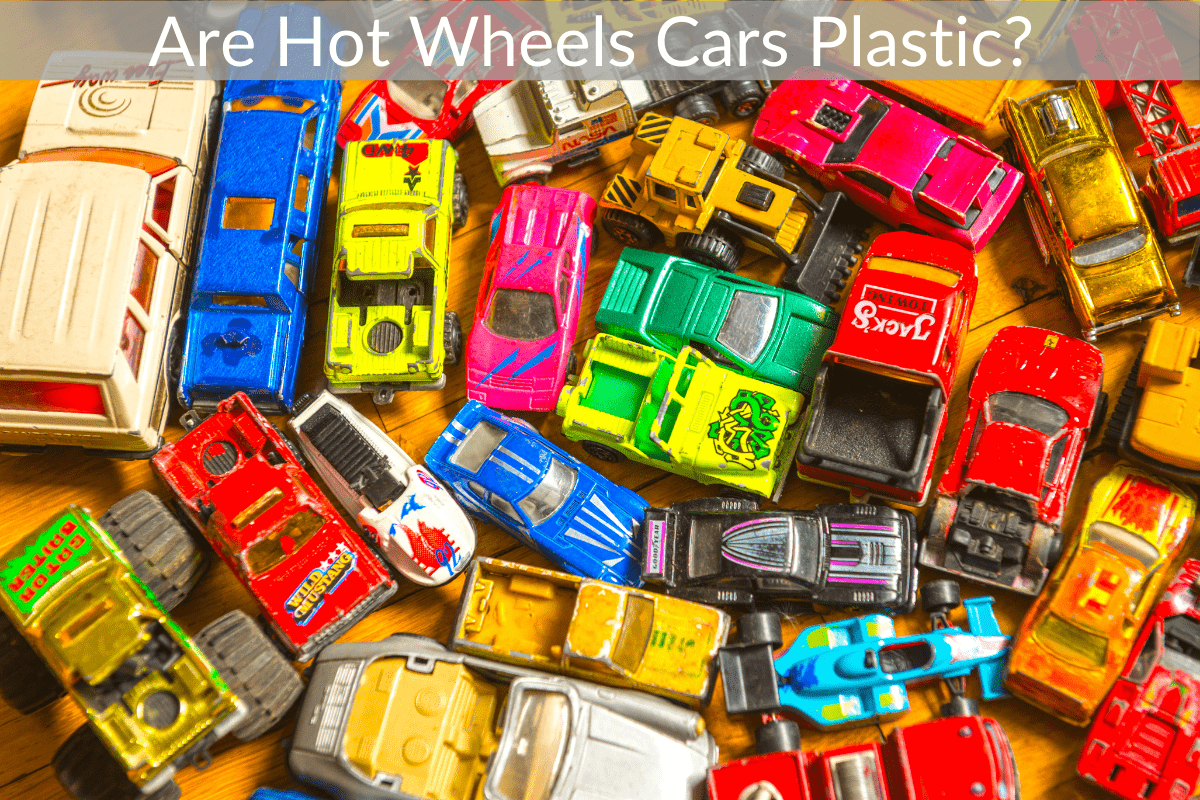 At some point in your life there is a good chance that you have played with (or at least heard about) Hot Wheels cars. These tiny little cars have been an incredibly popular toy for generations. Not only are they a blast to drive around and have fun with, but they are a fascinating toy to admire due to the plethora of details showcased in each toy as well.

Some people may wonder, or even be concerned about, whether or not the Hot Wheels toy cars are made out of plastic.

This is a bit of a complicated question to answer since it can vary from model to model.

As you can see the answer to this question isn’t as simple as just saying yes or no since it varies so widely.

Let’s take a deep dive and figure out what exactly the different Hot Wheels models are made out of.

The answer may surprise you!

To see the current most popular Hot Wheels cars you can click here.

Are Hot Wheels Made of Plastic?

There are no Hot Wheels that have ever been made that are made entirely out of plastic, but that does not mean that these little cars do not have any plastic parts.

Originally, Hot Wheels were made entirely out of diecast metal. The body as well as the base of the toy car was entirely made out of metal. While many fans of the toys adored this feature and were impressed with the quality of the toys, it sadly did not last forever.

In the late 1970s (1978 to be exact) Mattel began introducing Hot Wheels that were manufactured with metal bodies and plastic bases. This was to cut down on the costs and save the company money, while still providing a good looking (and good quality) toy for fans to enjoy.

Some more time passed and Mattel began introducing Hot Wheels cars that sported a plastic body with a metal base. This further saved on costs and allowed the manufacturer to create more elaborate designs for the bodies of the cars without increasing the cost of the toy.

What Are Hot Wheels Made Out Of?

Now that we have established that while it is true that Hot Wheels cars do contain parts and pieces that are plastic, what are they made out of?

Hot Wheels were originally made out of a special diecast metal known as ZAMAC. This is actually an acronym that stands for certain elements on the periodic table. These elements are as follows: zinc, aluminum, magnesium, and copper alloy.

All of these metals are combined together to form ZAMAC, which is then molded and cast giving you the unpainted base of the car (thus the term diecast). This alloy is also referred to by some as pot or white metal since it is also used in making pots and other tools.

This metal is still used in the production of Hot Wheels today, albeit in smaller quantities most of the time due to the introduction of plastic parts.

Do The Plastic Parts Affect The Quality Of The Hot Wheels?

One concern that you many people have is that the quality of parts suffers if they are composed of plastic. This is a valid concern, but you don’t need to worry about any drop in quality due to the plastic parts of your Hot Wheels cars.

While it may not be as visually pleasing as a car that is made entirely out of metal, and it may not have the same weight and feel as a toy that does not contain any plastic, Hot Wheels cars that include plastic parts do not suffer any significant drop in quality.

The plastic that is used is durable and sturdy and is ready to take a beating from any sort of play that a child may put the toy through. However, it is still only plastic, meaning that it cannot handle the same amount of stress that a fully metal Hot Wheels car would have been able to handle.

Another complaint that some fans of the toys have is that the plastic-bodied cars are not as visually appealing as their metal counterparts. Plastic cars are still able to have many details, and sometimes even have more details than metal-bodied cars, but they lack the sort of luster or shine that a metal-bodied Hot Wheels car would have had.

Cars that have a plastic base and metal body are preferable, but still not as desirable as a Hot Wheels car that is fully made of metal.

Which Hot Wheels Car Should You Get?

In general, many collectors and fans will always prefer to have a Hot Wheels car that is made entirely of metal. These are hard to come by nowadays, seeing as most of the common cars feature either a body or base that is made out of plastic.

When full metal Hot Wheels are not available, most will choose to go for a car that features a metal body and a plastic base. Metal bodies provide that beautiful shine and look much more realistic than Hot Wheels that have plastic bodies.

The plastic-bodied Hot Wheels are by no means ugly, though they do lack that extra bit of realism that a metal body affords. These models are, however, very affordable and are a great choice if you are looking to simply build up your collection.

Hot Wheels do feature plastic parts, and sometimes even mainly consist of plastic, but they are not entirely made out of the material. No matter what type of Hot Wheels you pick up you will find parts of it that are still made out of metal.

Whether it be the base, body, or both, there is always a metal part to your Hot Wheels car.