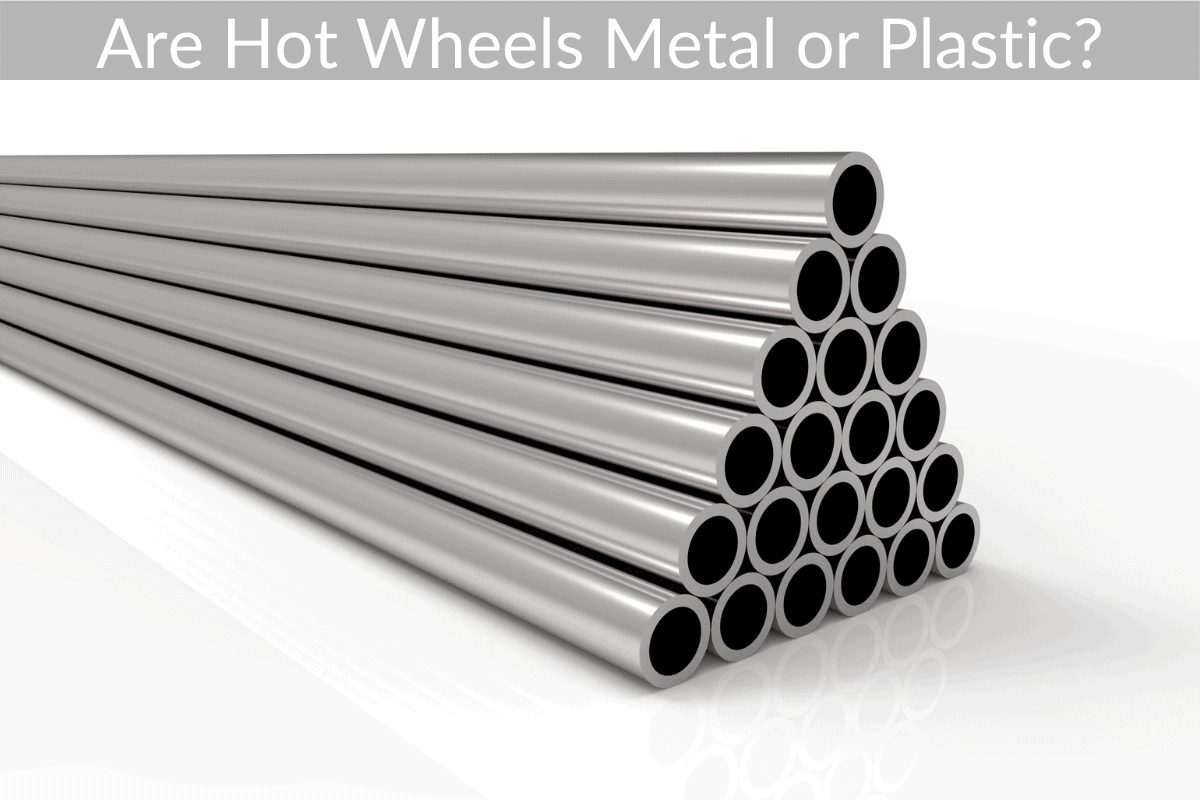 Hot Wheels have been a staple for children and toy car collectors alike ever since their inception. Through the years these little toy cars have undergone various changes to the way in which they are crafted and the materials that they are composed of as well.

A question that a lot of people ask is whether Hot Wheels toy cars are traditionally made out of plastic or metal.

The answer may surprise you because Hot Wheels cars can be made out of metal, plastic, or both!

Hot Wheels determined that having some parts of the car be metal and some be plastic is the best thing since the two materials work together to make the vehicle last longer. They of course wanted to save some money as well which the all metal cars made difficult.

You will want to continue reading if you are interested in learning more about Hot Wheels and the materials that they are made out of.

Are Hot Wheels Metal or Plastic?

When Hot Wheels first hit the market back in 1968 they featured bodies made entirely out of metal. Years later, this was slowly changed to change where certain parts of the toy car were made out of plastic.

Every Hot Wheels toy car is made out of just metal or metal and plastic combined.

Hot Wheels cars are referred to as a die-cast type of toy. That means that they are created using the method known as diecasting. This means that the metal parts of the Hot Wheels car, or the entire car itself, are produced via a die in which molten metal is pushed through, creating a cast of the car.

The material that these toy cars are made out of is known as ZAMAC. This term is an acronym that represents the various elements of the periodic table that it is composed of. Zinc, aluminum, magnesium, and copper alloy all make up the metal used in the die-casting process known as ZAMAC.

These little toy cars can be crafted out of either metal or plastic, but the die-casting process solely refers to the parts of the car which are crafted out of metal. The plastic bits of a Hot Wheels car is still crafted out of molds, but they are simply made out of plastic molds fitted onto the car body.

Metal Hot Wheels cars were first introduced back in 1968 when the brand blasted onto the scene. Back in the day, it was much more common to find Hot Wheels cars made entirely out of metal, since this was primarily how they were manufactured up until more recently when Mattel introduced plastic parts into their cars.

Keep in mind that Mattel has never released a fully-plastic Hot Wheels car as of yet, but they did introduce metal cars that featured plastic bases and plastic cars with metal bases.

This was done in order to cut costs and offer more detailing on the model of the car itself without sacrificing all of the metal parts of the car entirely.

You can still find Hot Wheels cars that are composed entirely out of metal parts, though they are, admittedly, a bit harder to find nowadays and more expensive than standard cars. This is due to the fact that Mattel has focused production more on their metal and plastic mixed cars, releasing only a few Hot Wheels made entirely out of metal per year, and these also tend to sit at a higher price point than standard Hot Wheels.

Many fans of the Hot Wheels line of products prefer these cars which feature metal bodies and plastic bases. This is because they still get to enjoy the look and feel of a metal-bodied Hot Wheels car since the base of the car is not too noticeable.

As stated previously, there are no Hot Wheels toys made entirely out of plastic… yet. There are, however, cars that feature plastic bases beneath metal bodies and also those which have plastic bodies on top of metal bases.

We have already discussed the former, so now we will cover the cars which sport plastic bodies. Again, it seems that Mattel did this in order to cut on costs while still presenting the customer with a quality product that has a good amount of detail also.

In fact, the Hot Wheels cars that have plastic bodies tend to have more detailing and more intricate features than their metal-bodied counterparts. This is most likely due to the fact that production costs on cars with plastic bodies are reduced significantly as compared to those with metal bodies.

Collectors and fans of Hot Wheels toys tend to not enjoy these types of cars as much as those that have metal bodies, however. While they do sport fancier designs and many finer little details than cars with metal bodies, they do have a very distinctive plastic look to them, and they tend to weigh quite a bit less than metal Hot Wheels cars do.

Thankfully, the quality of these toy cars is not affected too badly by the fact that they feature plastic parts. While Mattel has introduced more plastic parts into their Hot Wheels models, they have also taken steps to make sure that the structural integrity and overall quality of the cars are not adversely impacted in any meaningful way.

Of course, there are some hits to quality that just can’t be avoided when using plastic parts. These tend to be merely aesthetic and come down to the preference of the collector. metal Hot Wheels cars tend to be shinier and sturdier-looking, however they do not have as many minute details as their plastic-bodied counterparts.

There is also the sentiment of durability.

Unlike metal, plastic parts are much more prone to scratches and wear and can also not handle as much stress. This should not be an issue if you are simply a collector, but for children who can really beat up on their toys, this may be a concern.

So now you know, most modern Hot Wheels cars are made out of both metal and plastic. While you can find some that are still crafted entirely out of metal it is a bit difficult, and most sport a metal body with a plastic base or a plastic body and metal base.

Whatever the toy is made out of, there is no denying that Hot Wheels cars are a great collectible item and toy for individuals of any age.