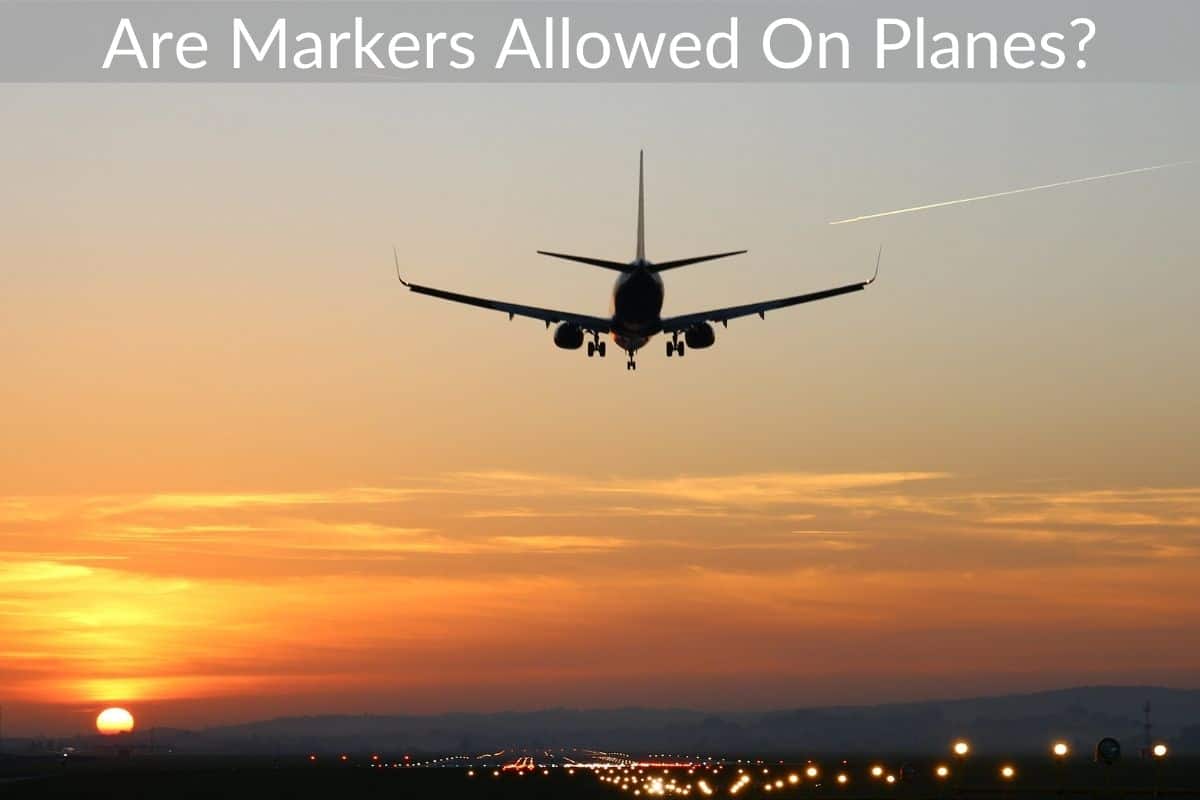 You may be an artist ready to travel the world and paint or draw everything that’s in sight, you packed your kits, clothes, and anything that you think you will need.

Your art kit has all the necessities: paint, brushes, crayons, markers, etc. but are allowed to take all of that with you on the plane?

I know that there are a lot of rules that pertain to what you can and cannot take on a plane, especially when it comes to liquids and other liquid based items.

Most people aren’t even really sure why it matters, I mean, those items are going on the plane one way or another, so why does it matter what part of the plane they are in?

You just need to bring your markers and just need to know where to pack them. It would be ideal to have them right on hand so that you can draw the view of the clouds, or the skyline as you are taking off or landing.

Let’s take a look at the answer if you can take markers on a plane.

According to the TSA you can take markers on the plane as long as there isn’t more than 3.4ozs of liquid that is separate from the marker. That is the limit that they have placed on liquids and that applies to all liquids including ink.

One issue that may arise with markers being taken on the plane is them popping open because of the air pressure. If you are concerned about that then you will want to put your markers in separate ziplock bags to keep from having any possible messes.

Copic markers are alcohol-based, which means that they are flammable, this could possibly cause some problems on the plane in the event of a fire but that would be rare.

In most cases your markers will not have any issues while you are flying (they likely won’t explode) and they are not against any TSA rules so you can bring them on the plane.

Although there are no rules for markers specifically according to the TSA there are rules for virtually everything else. A complete list of items that can and cannot be taken on your carry on or checked bag can be found here.

To see the most popular markers just click here.

Do Markers Explode On Planes?

So now that you know that you can bring your markers onto a plane according to the TSA your next question might be about them exploding. I did mention that was a possibility earlier and obviously if you have a nice (or expensive) marker set then you wouldn’t want it to get destroyed when flying with it.

Under normal circumstances markers won’t explode on planes but it could happen in rare cases. If your markers have been used at all it will be virtually impossible for them to explode since they won’t be full of ink.

If you have a brand new marker set it may be more likely to explode when you are in the air however it is still extremely unlikely to happen.

My kids have taken markers on planes many times over the years and we have never had an issue with them exploding. The biggest issue you will likely face is the people around you being upset with the smell when you try to use them in such a confined area.

If you are still worried about some of your new markers exploding while in the air and ruining your bag or other things in it then just stick your markers in a sealed Ziplock. This will prevent the marker from getting on anything even if it does leak or explode.

Can You Bring Pens Or Pencils On A Plane?

Are you curious as to if you are allowed to bring pens or pencils in your carry on, on a plane?

There are several types of pens, pencils, and other accessories that are actually banned from going on a plane with you. The ones that are illegal are definitely considered dangerous and are made in specific ways that are just not approved to make it through TSA.

All normal pens and pencils are allowed to go through security and go on a plane. You can even bring pencil sharpeners in your carry on if you choose!

Below are some popular items that people are unsure about bringing on planes and whether you can bring them.

Colored pencils: These are allowed on a plane in your carry on or checked baggage.

Pencil sharpener: These pose no threat and are allowed to be carried on a plane on your carry on or checked bag.

Pens: Normal pens are allowed to come on a plane, but be careful as the higher pressure may cause them to explode and spill all over you if you open it on the plane.

Tactical pens: These pens typically have a weapon or knife of some sort attached to them (or can be used as a weapon) so they are not allowed to be on your carry on but are allowed in your checked baggage.

Well, a tactical pen contains an extra-sharp ballpoint that can be used against an attacker. It has a blunt end that can be used to break through barriers or glass. It also has a machined steel or aircraft-grade aluminum body that gives the pen extra weight and makes it useful as a weapon.

Markers, pens, and pencils are absolutely allowed to be brought with you in your carry on baggage. None of these pose a threat as a weapon or a threat to the plane itself.

Some pens or markers might “explode” on a plane but even that “explosion” won’t do anything besides make a mess of your carry on bag.

You should be careful in the way that you pack those markers and pens though as they do have the potential to explode and ruin everything in your bag, and we definitely do not want that to happen.

I personally would recommend putting your pens and markers in a Ziplock bag to ensure that even if they do explode they don’t get all over you or your other items.

I hope this article was helpful to all those artists out there that are planning to travel the world some day. Good luck to ya.