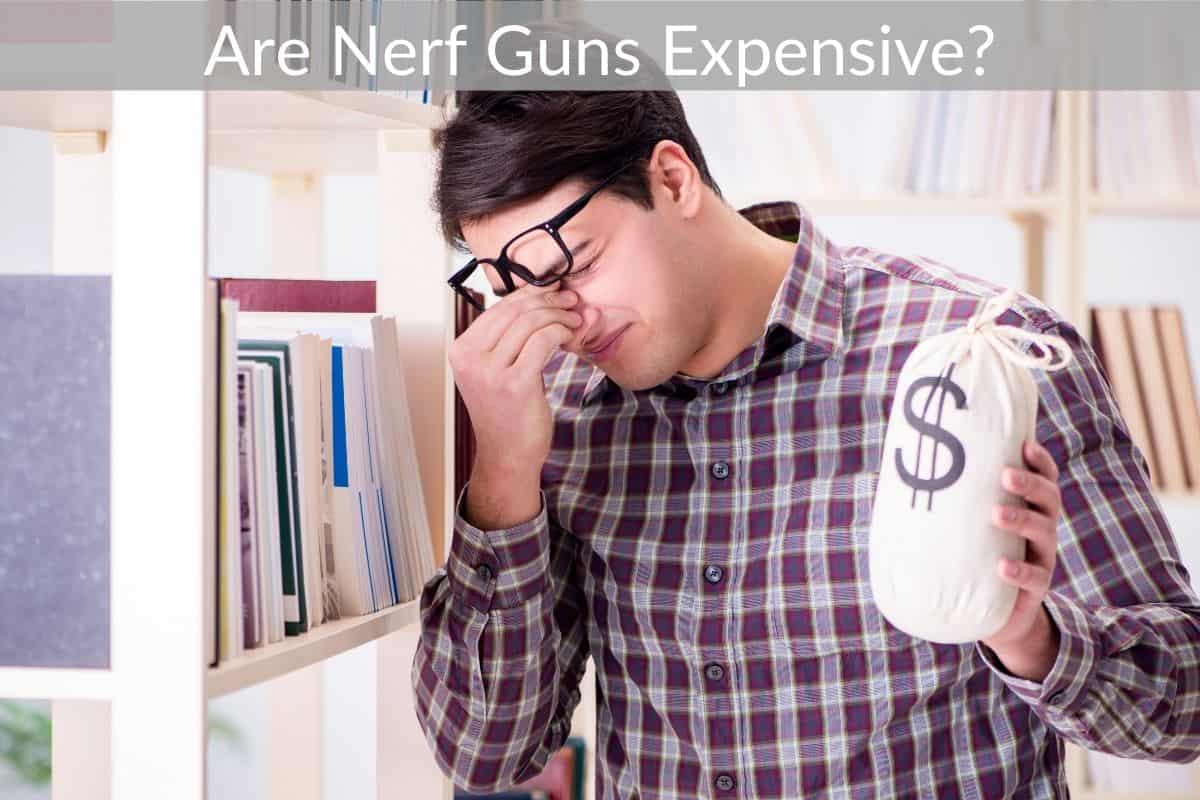 When it’s time for Christmas shopping, finding the right gift at the right price is what we all like to look for. Most kids (especially boys) are probably wanting something that destroys, shoots, or makes loud noise; that’s just reality.

A Nerf gun is probably a good option, it does pretty much all of those things at once. Of course you then try to scout for a good deal and hope that you can find the best price.

But is a Nerf gun too expensive for a budget or can you get it for a good deal?

Although not all Nerf guns are expensive, some of them definitely are. Most Nerf guns can be purchased for under $30 while some of the best ones can be over $100!

One thing to consider is that expensive can be a relative term. One person may think something is expensive that someone else won’t even bat an eye at the price, and that’s ok; so let’s just define expensive as anything over 50$ for now.

Nerf guns can range from $10 to several hundred dollars, depending on what type you are buying. If you want one that does a lot of damage and has a whole bunch of upgrades, you can expect to pay a pretty penny for it and it can certainly be expensive.

If you just want something to shoot for fun, you could find a good deal almost anywhere you go, even at garage sales or thrift stores.

The most expensive nerf gun that has ever been released is the Nerf Max Force Manta, it was released in 1995/1996 and this Nerf gun ran for $425!

It was a very unique creation as it looked like a manta ray, was able to block incoming fire, and, with multiple barrels, shoot two carefully-angled darts designed to converge on the target. That sounds epic!

If you or the person you are buying for isn’t that much into Nerf guns, well, Nerf went in a little different direction with their Nerf Dude Perfect Signature Bow, after partnering with the youtube stars, Dude Perfect.

This item is said to be the biggest and farthest-firing blaster ever as it can shoot up to 105 feet.

This item though has started to become rare. For those that do have them already, they can sell for up to 2 to 3 times the original shelf price of 250$.

The third and last item on the list is the original Nerf crossbow (purple version). This crossbow was released in 1995 at the price of 25$. Now after Hasbro has acquired this from the brand Kenner, the price has rocketed up to 250$.

I guess that you can say that Nerf is expensive!

To see the best selling Nerf blasters on the market (that won’t break the bank) just click here.

Why Are Nerf Guns So Expensive?

Usually you won’t pay a whole lot for a Nerf gun, unless you are some type of enthusiast that gets really into it and does customizations or just collects things.

Well, many people really love to collect Nerf guns and have battles. They will make customizations to those Nerf guns and see what they can do with them, but that can come at a pretty hefty price.

This leads to the question, why are Nerf guns so expensive?

Since Nerf has grown to be extremely popular lately, sometimes they will charge quite a bit for their products even to the point of causing people to wonder why they charge so much!

Every child sees Nerf guns on the shelf and thinks that they have to have one and Hasbro has done a tremendous job with their marketing and advertising of Nerf. On almost every tv show directed towards kids, you are bound to run into a commercial for the latest and greatest Nerf gun.

The toys are in such high demand that Hasbro is able to jump up the price of the Nerf guns, because so many people are willing to pay for them.

Not to get economical, but when an item like Nerf guns start having such high demand, the company is able to shoot the price up (or just keep it high for longer). That may change at some point soon, but not in the near future; there will always be kids and those kids will want toys.

Then you also have those adults that love to have a Nerf battle with each other, these ones are the ones I think that Nerf makes the most money off of, because every man has to be better than the other and they will pay whatever to prove who is top dog.

This is why I personally think that Nerf guns are still so expensive.

Every brand and every item has a cheaper knock off of itself. You may be a person that likes to save a penny and goes for the knock off/generic, nothing wrong with that. But, there are still those that want the best of the best, and will take the time to make sure they find the best quality.

When it comes to plastic toy guns, is Nerf made with good quality?

Nerf is a very good quality toy gun and as long as the darts don’t get lost they can seemingly last forever! Of course how long a Nerf gun will last depends on how well it is taken care of too.

I have many times seen a Nerf gun while going through my kid’s old toys or even at friend’s houses and wondered if it still would work. Nerf guns may get dusty, but after cleaning them, they will still shoot almost perfectly as long as you can find some bullets.

I’ve also gone thrift store shopping and garage selling, and have seen some pretty old Nerf guns that still worked just like new. I’m not that into them, nor do I know a whole lot about them so I am definitely not an expert, but I know quality when I see it.

I’m sure an enthusiast would say that Nerf guns are great quality toys as well.

If you are one of those that will go for the cheaper knock off or generic, then that’s fine too; but, if you are looking for more quality, Nerf is top of the line.

From other people’s words to my own experience, Nerf has never failed or been a letdown when it comes to quality and longevity.

Which Nerf Gun Should I Buy?

You may just be getting into Nerf, and you don’t know where to start. You may be asking, “What Nerf gun is right for me?” Well there is definitely a plethora to choose from with many different factors from size to distance it can shoot.

The best overall Nerf gun for a beginner is most likely going to be the Nerf N-Strike Elite Strongarm Blaster. You get a good Nerf gun for your money, and it has a good firing distance and sturdy appearance.

Whether you are a beginner or a veteran of Nerf, this blaster is still a great choice for you. You will not be disappointed; nor will it fail you. This Nerf gun is worth the buy when you are wondering which one you should get.

Depending on which one you get, Nerf guns can get expensive. If you want to be one that has a lot of Nerf accessories and does a lot of customization, you can expect to pay a lot of money and say that they are expensive.

If you are one that likes off brands, they probably won’t be expensive to you. All in all, Nerf can be cheap, but also expensive depending on which model you get and how badly you want to win your next Nerf war.