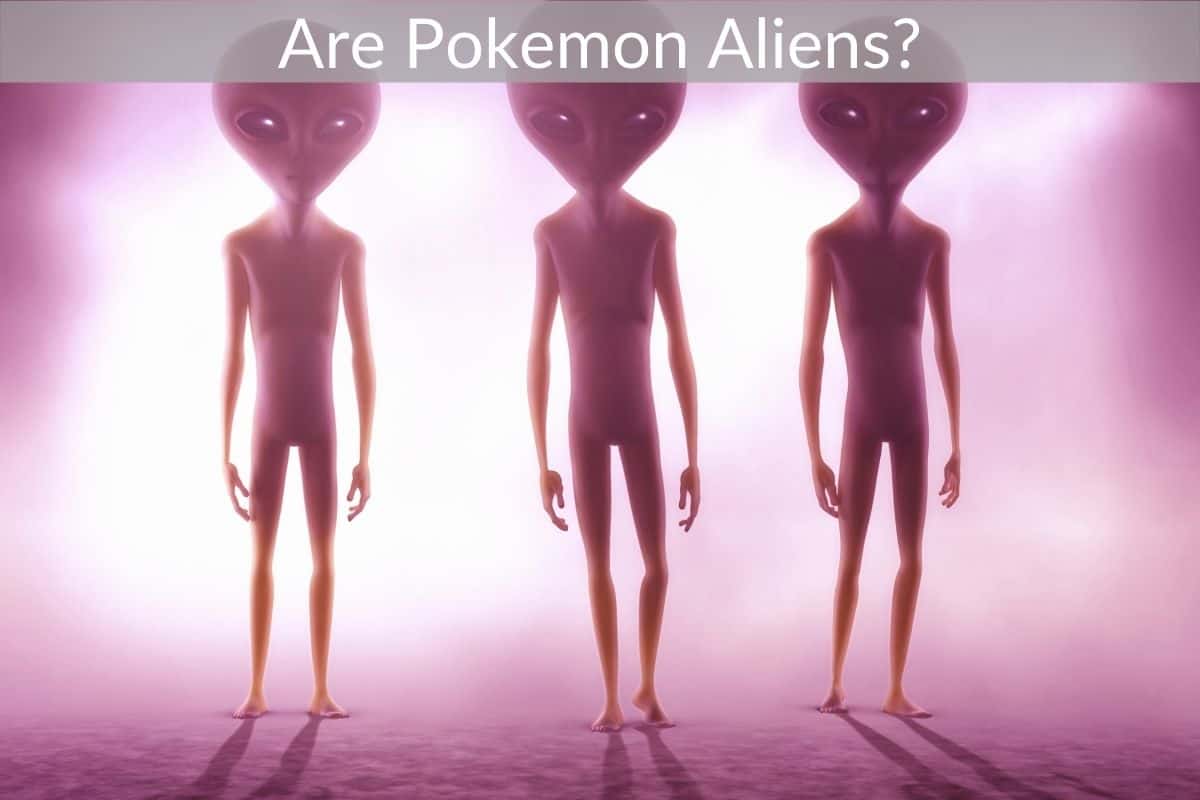 “Pocket Monster” trading cards are coming back. Monsters of water, fire, ghosts and beyond, Pokemon are interesting creatures that use their elemental energy to battle.

In the world of Pokemon, humans can capture and train these monsters for fighting or for companionship. They have a human-animal-like relationship and live alongside one another on the Pokemon world planet.

Complete with supernatural powers Pokemon resembles animals and some look similar to plants. These fictional characters must be a type of alien… right?

Pokemon can be considered aliens since they have their own fictional Pokemon world. However in the Pokemon Universe they are much more like animals than aliens.

It is said that the Pokemon world is like a parallel universe version of Earth. Humans live on this planet along with humans. In the fictional world, there are other planets where Pokemon live and they are thought to be extraterrestrial. Since it’s a fictional world, Pokemon may be set to be sometime in the future or alternate reality.

So Pokemon live on the earth like planets as types of animals. Alien Pokemom are rumored to come from galaxies in the Pokemon universe.

Pokemon are the only type of animals on the planet making some wonder if Pokemon invaded earth and destroyed all normal animals. Others seem to think that the planet was created just for the Pokemon and humans were the ones brought to the world.

Another reason some may think that Pokemon are aliens is the fact that they are all of one species and intelligently designed. Even the way they look seems to point to an origin far across the stars.

Which Pokemon Came From Space?

All Pokemom look somewhat alien-like but what can you expect from a fictional world? There are some Pokemon that are said to be from the outer regions of the universe, coming to this parallel universe version of earth called the Pokemon world.

Some Pokemon are said to have come from outer space and have special powers suggesting just that. The most commonly known Pokemon that this applies to is: Staryu and Starmie.

They look alien-like and have powers that can only come from outer space.

Pokemon don’t just exist in the Pokemon world but somewhere in outer space as well. Some of these alien Pokemon came and landed on the Pokemon earth.

Some extraterrestrial Pokemon are known as Staryu and Starmie. Star-shaped with a multi-colored core, these characteristics are that of a Pokemon from somewhere else in the galaxy.

These Pokemon can send radio-waves to other planets and they gather in large groups at sea to flash their red colors to the sky. The Staryu line of Pokemon also have healing properties.

The ancestor of all Pokemon is said to be one called Mew. In regards to this, Mew may inhibit other planets as well.

These Pokemon are believed to have been seen flying through space in the past.

Another is the Cleffa line of Pokemon, Clerra, Clefairy, and Clefable. These Pokemon are known to have come to earth using meteors and spaceships crashing to the surface.

They are star-shaped and gather moon stones from their home crash sites. For more alien Pokemon facts you can click here.

What Planet Does Pokemon Take Place On?

Originating in Japan, Pokemon can trace its origins back to a gaming magazine in the early 1980s. From there the “Pocket Monster” world has grown from its Game Boy version to trading cards and TV. Pokemon GO has recently become a popular mobile game and recently collecting Pokemon cards has become a hobby along with trying to find rare cards to sell for lots of money.

Pokemon takes place on the Pokemon world planet said to be similar to earth. No name is given to where the Pokemon live as of now.

Some of these planets contain Pokemon life also. On this parallel universe version of earth called the Pokemon world, Pokemon are captured and then trained for fighting battles against other Pokemon species.

Each Pokemon has a different ability and can alter their specific types of element and energy for their use.When capturing and trading a Pokemon for combat, you hope that it will win so that the Pokemon will evolve and be more effective in the next battle.

In the video games and card games you can collect the Pokemon to train and battle them to work your way up in the Pokemon world.

Who Is The First Pokemon?

Ken Sugimori is the primary designer for the Pokemon games. His creatures have a distinct Japanese touch and have become familiarly associated with the Pokemon name.

He designed the first Pokemon. From their animal-like characteristics to their supernatural abilities, Sugimori did something right when he created Pokemon.

The first Pokemon to ever be designed was Rhydon. Lapras and Clefairy were also among the earliest Pokemon.

Appearing in the Pokedex first, the Pokemon Bulbasaur is numbered as 001. But this is not what makes it the first design. It is said that Rhydon was the first ever designed Pokemon.

The rhino-like Rhydon can stand on its hind legs and crush rocks. Toppling buildings with one sweep of his tail is an easy feat for this Pokemon. He is protected by armor and is almost impossible to hurt in battle.

While Rhydon is the first ever created Pokemon the oldest one in the games is Arceus. This prehistoric Pokemon resembling a mythical horse was the first to ever exist in the Pokemon world.

Arceus protected and cared for the Pokemon world in ancient times, even having the power to bring back things that it had destroyed. “The Original One” created other Pokemon who then created more and so on.

Along with being the oldest Pokemon, he is credited with the creation of other Pokemon as well.

Pokemon is a fictional world created for Pokemon games. It’s well-known characters and monsters live in a place called the Pokemon world.

Although these creatures look alien-like, in this alternate universe they are normal living things on the planet.

Some Pokemon have come from outer space to the Pokemon world planet. These can be considered alien Pokemon.

This made-up universe and galaxy along with its interesting Pokemon has recently been gaining more popularity. It comes as no surprise that this media franchise has been one of the largest and highest grossing in the world.