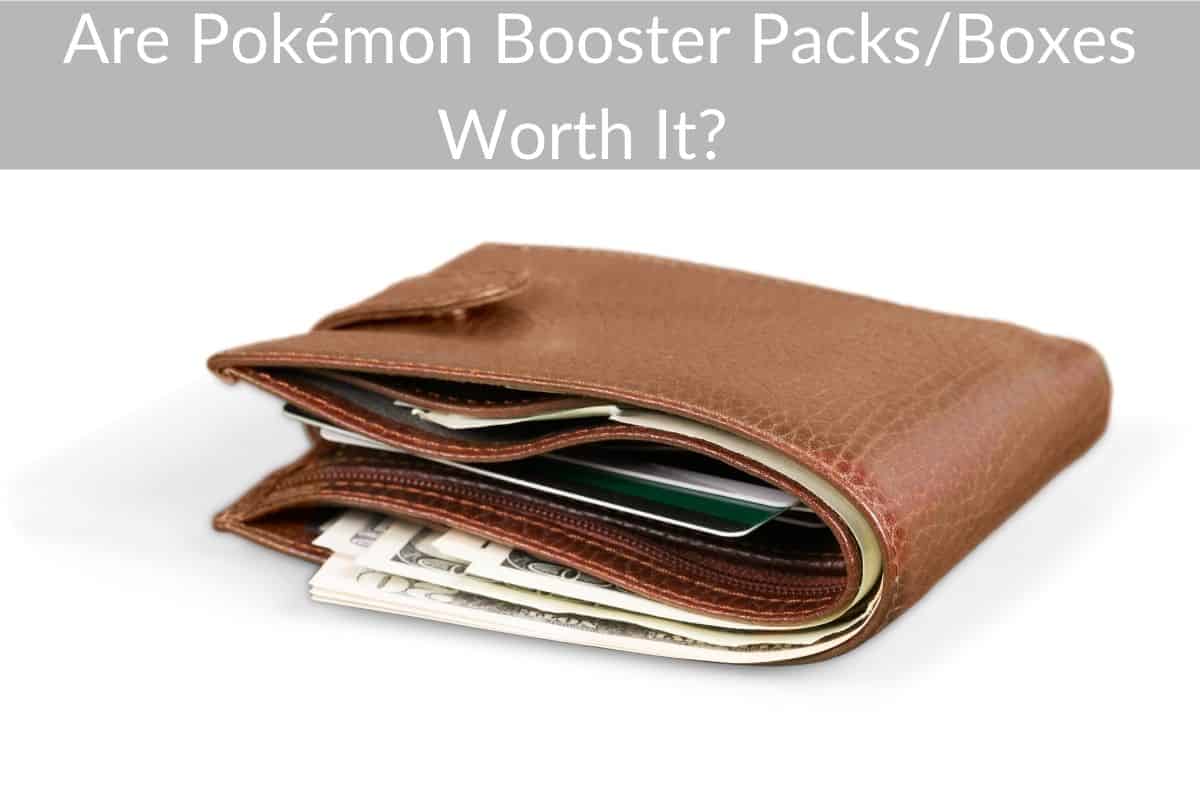 A Pokémon booster pack contains a total of eleven cards. It has one energy card and a mix of ten cards of varying rarity.

Before buying one of these packs you will want to know if they are worth it.

Pokémon booster packs and boxes are worth it. They all contain at least one rare or super rare card and they’re a great way to get a variety of cards.

A booster box is a box that contains thirty-six booster packs. When you purchase a booster box you have a better chance of getting a wider selection of cards.

You could purchase booster packs individually but you have more of a chance of getting repeat cards than you would if you were to purchase a booster box.

When you open a Pokémon booster box you will get two hundred and sixteen common cards, one hundred and eight uncommon cards and thirty-six rare cards.

While you will still get some repeat cards there is a much better chance that you will not get as many repeat cards as you would if you were to purchase thirty-six separate booster packs.

The manufacturer’s suggested retail value of a Pokémon booster pack is four dollars while you can find booster boxes for eighty-nine dollars.

While a booster box costs more money up front it is a better investment for your Pokémon collecting. If you were to eventually purchase thirty-six booster packs that would cost you around one hundred and forty-four dollars when purchased individually which is a fifty-nine dollar increase from purchasing a booster box.

To see the most popular Pokémon booster packs and boxes just click here.

Are You Guaranteed A Secret Rare In A Pokémon Booster Box?

A booster box is a package of thirty-six booster packs. Each booster pack contains a mix of uncommon, common, and rare or higher Pokémon cards.

Every booster pack also contains one energy card, bringing the total number of cards in each booster pack to eleven. Each booster pack will have one rare or higher Pokémon card, among the ten cards that are in the pack.

Inside your booster box is thirty-six booster packs. So, there will be at least thirty-six rare cards.

There is a chance that you could get a secret rare card among those thirty-six booster packs but there is no guarantee of what level of rarity of a card you will get in a booster box.

You will definitely get at least one rare card for each booster pack that you open, there is a chance that you could open the packs in your booster box to discover a secret rare card but there is no guarantee that you will find one.

How Can You Tell If A Pokémon Card Is A Secret Rare?

All rare Pokémon cards will have a small black star in the bottom right-hand corner of the card.

Secret rare Pokémon cards will have a higher number than the set. For example, a card that has a number that reads 123/119 is a secret rare card.

Are Pokémon Cards Worth Collecting?

Pokémon cards are extremely popular and are probably not going anywhere any time soon. These cards are everywhere, but are they worth collecting?

Pokémon cards can be worth collecting in the long run if you’re willing to look for the harder to find cards. Not all Pokémon cards will be worth money however so if you are collecting as an investment it might not work out.

There are so many cards being produced every day that to start buying them now with the intention of collecting them in order to make a fortune is probably not a feasible plan.

Most Pokémon cards are not worth a lot of money. You might be able to sell a card for a quarter or even a dollar but not much more than that unless you have a more valuable card in mint condition.

There are cards that are worth more money but those will be far more difficult to find.

In December of 2020, a first edition shadowless holographic Charizard sold for $369,000. Due to a printing error Charizard did not have a shadow on the card which made this card extremely valuable.

The error was corrected and printed with a shadow which is why this shadowless card can be worth so much money.

How Much Is An Unopened Box Of Pokémon Cards Worth?

Is it worth it to save these unopened boxes to sell again later?

Unopened vintage Pokémon card packs and boxes are selling for a lot of money right now. In January of 2021 an unopened box of first edition Pokémon cards sold at auction for over $400,000!

Since the box had never been opened all those cards were in mint condition. Chances are that if the new owner wanted to open the box and sell each card individually, they could make even more money than what they invested in the cards.

If you have a booster box that is unopened and you are not itching to open it right away then it certainly couldn’t hurt to go ahead and save it. Someday down the road it might be worth more money.