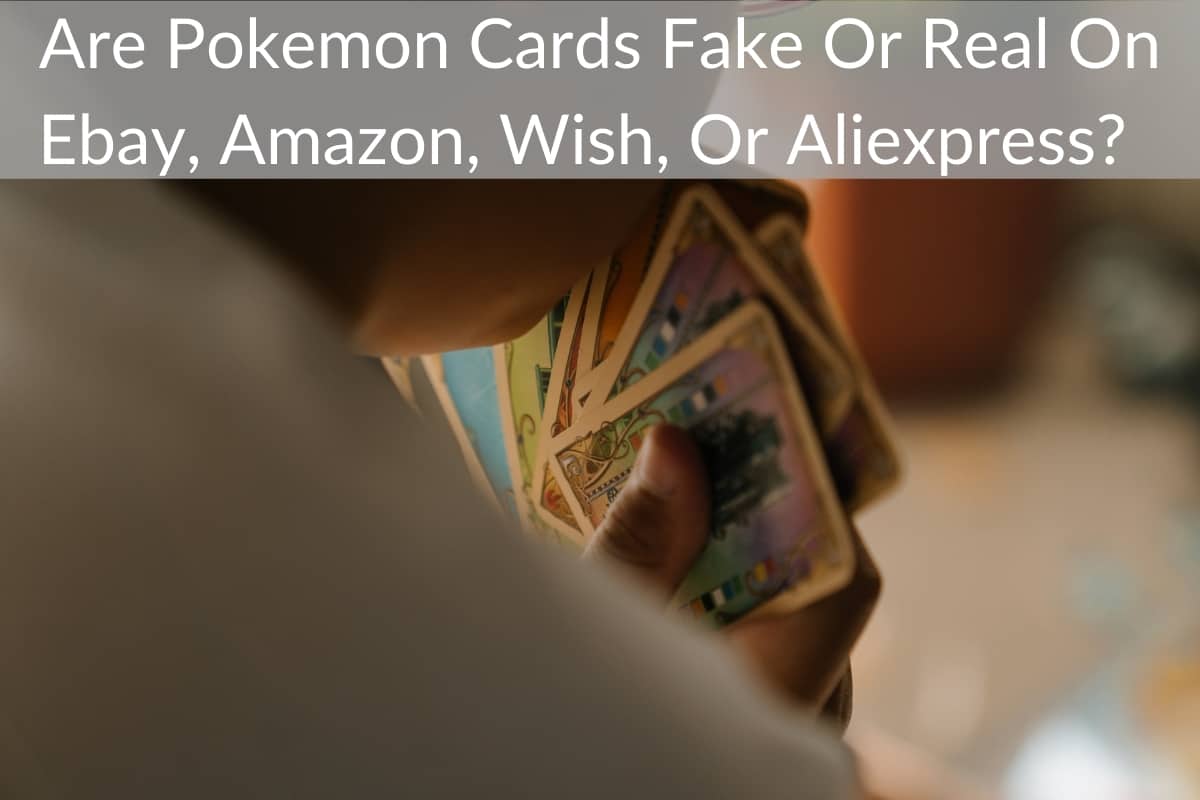 Pokemon cards are all the rage among Pokemon fans right now and we completely get you if you want some for yourself. After all, who wouldn’t feel good after collecting the whole deck of the latest generation cards?

If you have anything from the first edition cards, they might even be worth thousands of dollars!

Getting your hands on the latest Pokemon cards can be difficult sometimes, and there are a lot of fake Pokemon cards on the market that are trying to scam you.

So, which website can you trust, where can you get the authentic cards and how can you tell if your Pokemon cards are original?

Pokemon cards on Amazon and eBay are typically real however it is important to check the seller’s feedback as new sellers may or may not be scammers. Aliexpress and Wish however have many fakes of all sorts of products on them so buying Pokemon cards on those sites is not a good idea.

In this article we will be talking about all the Pokemon cards available on the leading websites like Amazon, Ebay, Wish and AliExpress, whether they are fake or real and how to check if your Pokemon Cards are real or not.

To see the most popular Pokemon accessories currently on the market just click here.

Why Fake Pokemon Cards Are Made

There are a lot of Pokemon fans out there and real Pokemon cards are always in huge demand. While owning the latest ones are cool, something from the first edition of cards can be worth a whole lot of money.

The reason behind this is back in those days, Pokemon cards were produced in very limited supply and then they quickly became collector’s items.

As virtually no one wants to part with their Pokemon cards, the supply dried up and when demand grew, price soared.

This influenced a lot of scammers to produce fake Pokemon cards and flood the market. Now if you don’t know what the original cards look and feel like and how to check whether your Pokemon Cards are real, you can easily be deceived into buying fake cards and spending a lot of money on worthless paper.

That is why it is important that you know how to tell the real Pokemon cards apart from their fake counterparts.

Are Fake Pokemon Cards Worth Anything?

Fake Pokemon cards and for that matter fake anything is never worth the price that you have to pay. The fake Pokemon cards are not only illegal (because of copyright infringement & selling counterfeits), they can never match up to the quality of the original Pokemon cards.

You can buy them to play with your friends or for your own enjoyment while knowing they are fake, but if you want to play tournaments with them, keep in mind that they are not tournament legal.

This makes the cards have very low or no value and you will be better off buying an original deck for yourself.

Why Are Fake Pokemon Cards Bad?

The worst fakes will make use of a printer to print the texture, rather than reproducing during the production of cards.

In the more recent fake card sets, from XY series onwards, the holo seems to be very flat and less shiny.

Sometimes, the fake Chase cards are found to have a brown, yellow or even orange hue, which look cheap and unappealing.

How To Tell If Your Pokemon Cards Are Fake Or Real

There are three main ways that you can tell if the Pokemon cards you have or bought are real or fake. Those are:

1. Check the pictures and text

First, you need to learn about the different Pokemon species. On some fake cards, fake Pokemon animals will appear in the pictures. Check cards for suspicious content or stickers on top if their display looks dubious.

Examine the attacks and the HP for any irregularity. For example, any HP over 300 or a null value in attack means that the cards are fake. Additionally, in the real cards, HP (attack no.) is written exactly in this order.

Any different order means that the cards are fake.

However in the newer cards, the value will be written as HP 70 and not 70 HP.

Occasionally, a printing error may result in the variable and attribute names to be flipped. Make sure you check the card thoroughly before discarding it as fake, as a genuine card that has a mistake may still be valuable.

However, chances of these are very slim.

Spelling mistakes, fancy borders surrounding the picture are warning signs that the card is fake.

So make a detailed inspection.

Fakes often have distorted or enlarged energy symbols. So compare the cards with original ones’ energy symbols to help check the card’s authenticity.

Fake cards usually have smaller text and a different font than real cards. so make sure you check the text as well.

They will often also have no trademarks and may say something like “pre-release trading cards” if they are fake. Further, the cards’ material will be cheap cardboard in place of high quality original material and they will come without the authentic bag.

Fake cards will often have some words spelled incorrectly as well. Mistakes in the name of the Pokemon or writing “Pokémon” as “Pokemon” are the most common red flags.

Moreover, look for incorrect spelling of the attacks and no energy sign under the attack to pick out the fakes.

The cards are fake if the colors are faded, smudged, darker or simply wrong. However, remember the shining Pokemon are intentionally wrong colored.

The fake cards usually have a purple hue on the blue swirling logo. Sometimes the Poké Ball is inverted or uneven as well.

3. Check the weight and dimensions

If you hold the fake card up to the light, you may be able to see through it. Fake cards usually feel thin and flimsy.

If it is the wrong size, that is another indicator. In addition, fake cards don’t usually have a copyright date or an illustrator listed at the bottom.

Moreover, if the cards bend easily and look disproportionate, in all probability, they are fake.

Are The Pokemon Cards Available On Amazon, Ebay, Wish and AliExpress Real?

While there are some Pokemon Cards which are real, available on Amazon and Ebay you do have to be careful as sometimes fake ones will get mixed in with real ones.

Since both Amazon and EBay allow third party sellers whether the Pokemon cards are real or not can vary from seller to seller and even from batch to batch from the same seller (depending on where they got the cards from).

When talking about Aliexpress and Wish however you are much more likely to find and buy fakes there than you are to find real ones. Aliexpress is especially notorious for selling copies of items (fakes) so if you find Pokemon cards on there then it is very likely they won’t be real.

Wish is very hit or miss in regards to fakes as they only sell things from third party sellers so it isn’t a good option as you will often be returning fakes over and over again trying to find one real set or Pokemon card.

There are a ton of fake Pokemon cards available throughout these leading ecommerce websites.

Therefore, it is in your best interests to check whether the cards you are intending to buy are indeed real.

Above all, as you know how to check whether the cards are real, you can now make an informed choice.