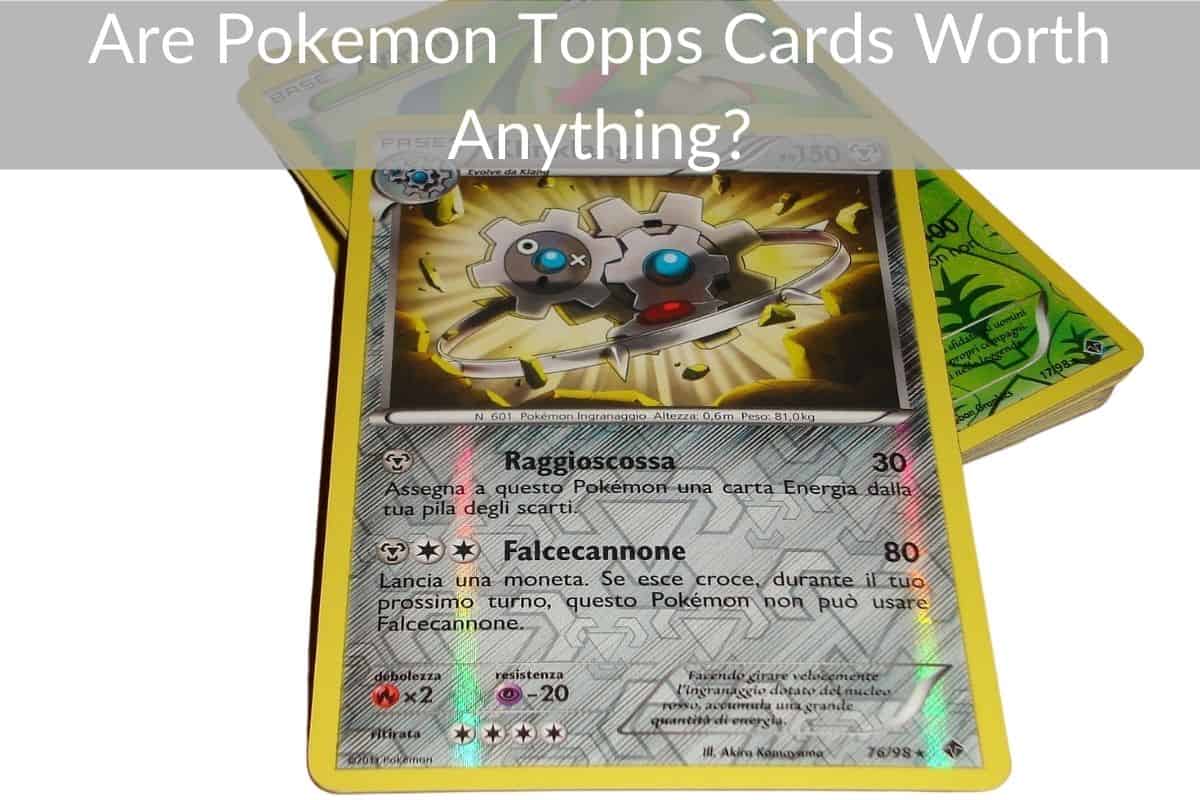 You may have heard about the hype of Pokemon cards. Some of these little cards can sell for a pretty penny if they are first-edition or rare.

The most valuable Pokemon cards are the PIkachu Illustrator cards valued at over $100,000!

You may be thinking, I want to get in on this. Well, finding valuable cards is not as easy as it sounds. Most of the time, the reason they are valuable is because they are rare. And rare things are hard to find.

If you have a stash of Pokemon cards you started collecting years ago, or maybe just bought a pack or set, you may want to look through them and see if you have any rare finds.

Pokemon Topps cards are worth something if they are rare. Their value is anywhere from 25 cents to $1000 depending on their rarity and condition.

One type of Pokemon card is the Pokemon Topps card. Topps Pokemon cards are not really that valuable in the grand scheme of the Pokemon world. There are other cards that are worth far more.

Although if that little card is rare then this is what makes it more valuable. Rare things are higher in value because they are hard to come by. When something is difficult to obtain and everyone wants one, it is rare and worth more.

There were no bonus “chase” cards in this set. These cards were randomly distributed in packets of eight with one card in each pack a randomly chosen foil card.

Now, Topps does not manufacture any cards for use with the official Pokemon trading game. The company is a well-known manufacturer for sports cards.

When they made Pokemon cards, they released seven card sets based on Pokemon, five of these based on the animated series and two sets featuring scenes from, “Mewtwo Strikes Back” and “The Power Of One”.

As with other Pokemon cards, Rare Topps cards are worth more than just the regular ones.

To see the most popular Pokemon cards just click here.

Does Topps Own Pokemon Cards?

Topps is well- known for their sports cards products. They also have manufactured some Pokemon cards. Does this mean that Topps own Pokemon cards?

Topps does not own Pokemon cards but rather just manufactured some cards based on Pokemon under license from Nintendo of America.

Founded in 1938, Topps produces all sorts of merchandise. They sell everything from candy and comic books to trading cards. Baseball, football, basketball, and hockey make up their genre of sports cards.

Starting out as collectibles for children, adults now enjoy collecting the cards. While regular packs sell for under $10, some single cards, like the 1952 Mickey Mantle card, are highly sought after collectors items that are worth tens of thousands of dollars.

Along with Nintendo of America, Topps started selling Pokemon products.

Still these did not become quite as popular as Pokemon had. Topps Pokemon cards are worth something if it is a foil card or rare and in good condition.

Although Topps sold Pokemon products, they did so under Nintendo of America and so Topps does not own Pokemon.

Where Can I Sell Topps Pokemon Cards?

Selling Pokemon cards is easy to do and if you have special cards you probably won’t have any trouble finding buyers. But you could be wondering, where can I sell Topps Pokemon cards?

You can sell Pokemon cards online easily. The best places to sell your Topps Pokemon cards are eBay, Facebook, and Pokemon collector’s sites.

Pokemon trading cards are famous all over the world. One of the most popular characters being Pikachu who is the franchise’s mascot. Some of the cards are worth more than others.

Avid players of the game search for rare and valuable cards. Newer cards have upgraded powers of their pocket monster making it difficult to use older cards to compete with.

But if it is rare, it can sell for a good price. Topps manufactured Pokemon cards and if they are rare ones, they could be valuable.

Now, you may have to do a little research to find out exactly how much your Topps Pokemon cards are worth and sell them accordingly. By looking up the particular cards you are selling it shouldn’t be too hard to find out how much you can sell them for.

You can also ask other Pokemon collectors about the worth of your cards. There are many websites on which you can post your cards for sale.

Topps does not own the Pokemon trading cards but sold them under a license with Nintendo of America. If you own some of the Pokemon cards made by Topps, you may get a good amount for them if they are rare.

To sell them, go to any of the websites mentioned earlier in the article and post them on there for sale. If it is a good card, you will have plenty of buyers in no time.

So, if you have some Topps Pokemon trading cards in that collection of yours, they could be worth something.