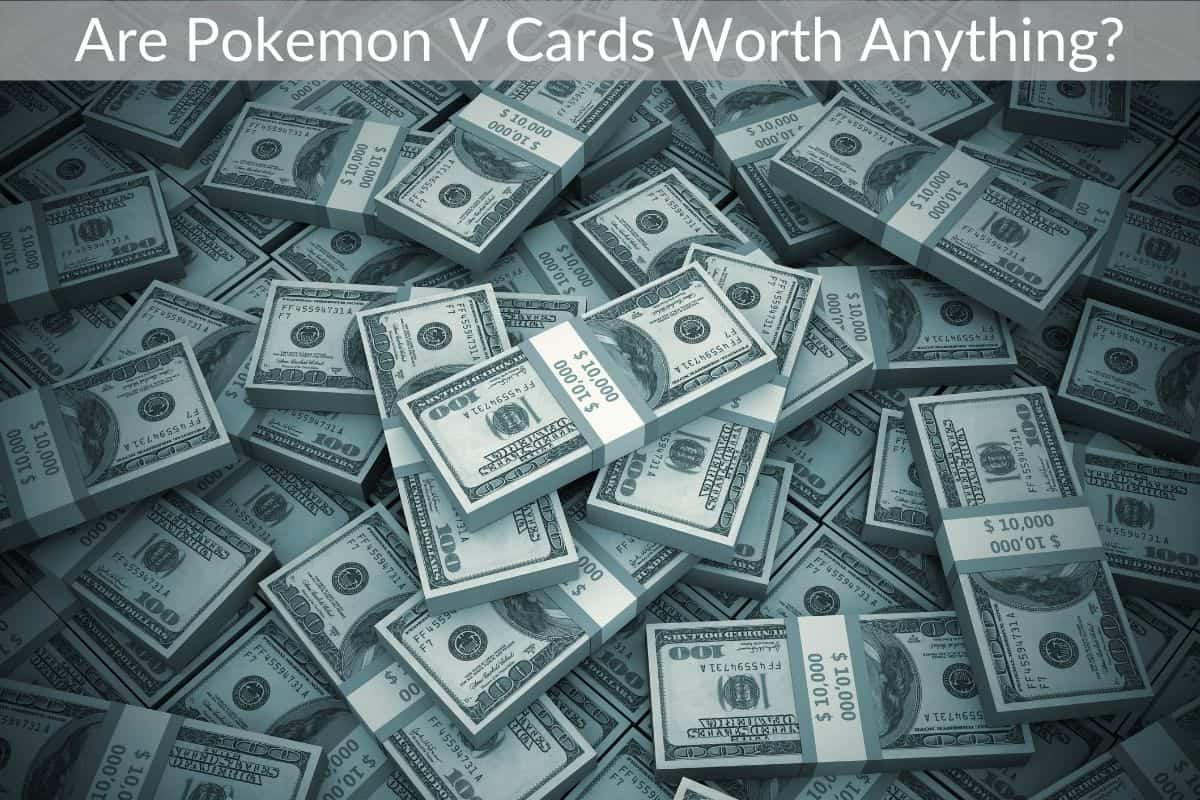 Let’s talk about Pokemon trading cards. They are used in game play to defeat other Pokemon players’ cards. This is why many Pokemon fans search for cards with higher abilities and powers.

Pokemon cards are even purchased just to add to collections. Or if the cards are rare and valuable, they may be sold for a lot of money or traded. Some of these cards are actually worth quite a lot especially if they are rare.

This all depends on certain factors. One such trading card, the Pokemon V card has higher hit points than an average Pokemon card and also usually has powerful move sets and abilities. The Pokemon V cards can even be placed on top of a V-MAX card for it to gain even higher abilities, moves, and even health.

Because of all they can do, these cards are highly sought after by Pokemon fans. Now, you are probably wondering, are these Pokemon V cards worth anything?

The rarest Pokemon V cards can go for $1,000 or more (if they are graded) while the cheapest ones will only sell for a few dollars. How much your specific Pokemon V card is worth will depend on the rarity of the card, its condition, whether it is graded or not, and the current market conditions.

The easiest way to know how much your card is currently worth is to head over to eBay and look up the exact card you have and then look at the previously sold listings. This will tell you what people are willing to pay for that exact card.

The world of Pokemon is fascinating and unique. It’s made up of fictional creatures and humans. The creatures are called Pokemon and the humans are the Pokemon trainers.

Basically, the trainers capture the Pokemon in order to train them to fight. They fight against other Pokmoin earning rewards for the trainer and themselves. When they win victories they grow in power.

Oh, did I mention that Pokemon also have powers? Yes, each species has different strengths they use against one another including water, fire, air, etc.

The world of Pokemon consists of trading cards as well as an animated TV series and a mobile game called Pokemon Go.

Since these cards have powers which can defeat other Pokemon cards, some are more powerful than others. Take the Pokemon V card for instance, this card is stronger than Pokemon cards. These cards are similar to the GX cards since they can have higher hit points and heavy hitting attacks.

If either of these cards are knocked out then you are able to take two prize cards instead of just one. While rarity depends on many factors, Pokemon V cards are powerful and hard to find making these cards pretty rare as well.

Pokemon V cards are only able to be found in the Sword and Shield expansion of the trading card game. Because of the Pokemon V card’s type and rarity, they are worth something.

In the rest of this article I will go into more detail about how rare Pokemon V cards are and which ones are the rarest and most valuable. To see the popular Pokemon V cards just click here.

Is A Pokemon V Card Rare?

According to an article discussing Pokemon card rarities, it is said that, “These are the cards that everyone wants to be pulling from a booster pack. They’re usually some of the biggest creatures in the game and some of the hardest cards to find. These cards can also be classed as Ultra Rare. In truth, they have a lot of different names and come with a unique mechanic that’s special to the current rotation.”

If a Pokemon V card falls into the categories which identify it as being rare then you will be less likely to find it in a pack. Cards featuring a black star, or holographic artwork, among other things are rare cards. There are even V-MAX cards which can be placed on top of Pokemon V cards in order to give the new abilities and moves as well as health.

So, yes, Pokemon V cards can be rare and if fitting into rare and valuable categories can even sell for a lot of money.

What Is The Rarest V Pokemon?

Pokemon V cards are a part of the Sword and Shield card sets. They contain more abilities than regular Pokemon cards. Because of this, these cards are looked for by Pokemon fans because they are rare and valuable.

The rarest Pokemon V cards are the Zamazenta V and Zacian V. Classified as Golden Secret Rare cards, these have special abilities which can hold off V-max cards and make them hard to beat. They are highly sought after making them rare and valuable.

Secret rare pokemon cards are a very rare form. The Zamazenta V and the Zacian V are golden cards in this particular group. These cards are popular and since so many Pokemon fans want them, they are hard to find.

Because they are hard to find, this makes them rare. And since they are rare, they are worth quite a bit more than other common cards. So, you can see why Pokemon players search for these rare cards.

According to this article, they explain these Pokemon V cards by saying, “Zamazenta V…is…virtually immune to the attacks of the V-max Pokemon…Zamazenta V will surely be played… to hold off those V-max cards that can hit way too hard at times…Zacian V allows you to search for energy and attach it to your Pokemon immediately…have fun searching for it on auctions at some really high prices. But it’s worth every penny!”

Rare Pokemon V cards are worth something. The reason these cards are rare is because so many people want to purchase them and have them in their collection and also because they are less likely to be found in the wild. Rare cards are those which are hard to find because they are so popular. Because of this, their value shoots up.

The value of the cards will vary according to what kind of card it is. Pokemon V cards are rare Pokemon cards and are worth something but exactly what they are worth varies from a few dollars to a few hundred/thousand.

The rarest of these is the Zamazenta V and the Zacian V cards which are considered golden Secret Rare cards.

Pokemon V cards can be found in Sword and Shield sets and have abilities that can defeat regular Pokemon cards making them highly sought after and thus, hard to find. When a Pokemon card is hard to find it is classified as rare and becomes more valuable.

Since Pokemon V cards are rare, and Pokemon fans search for them to add them to their card stash, they are worth something.