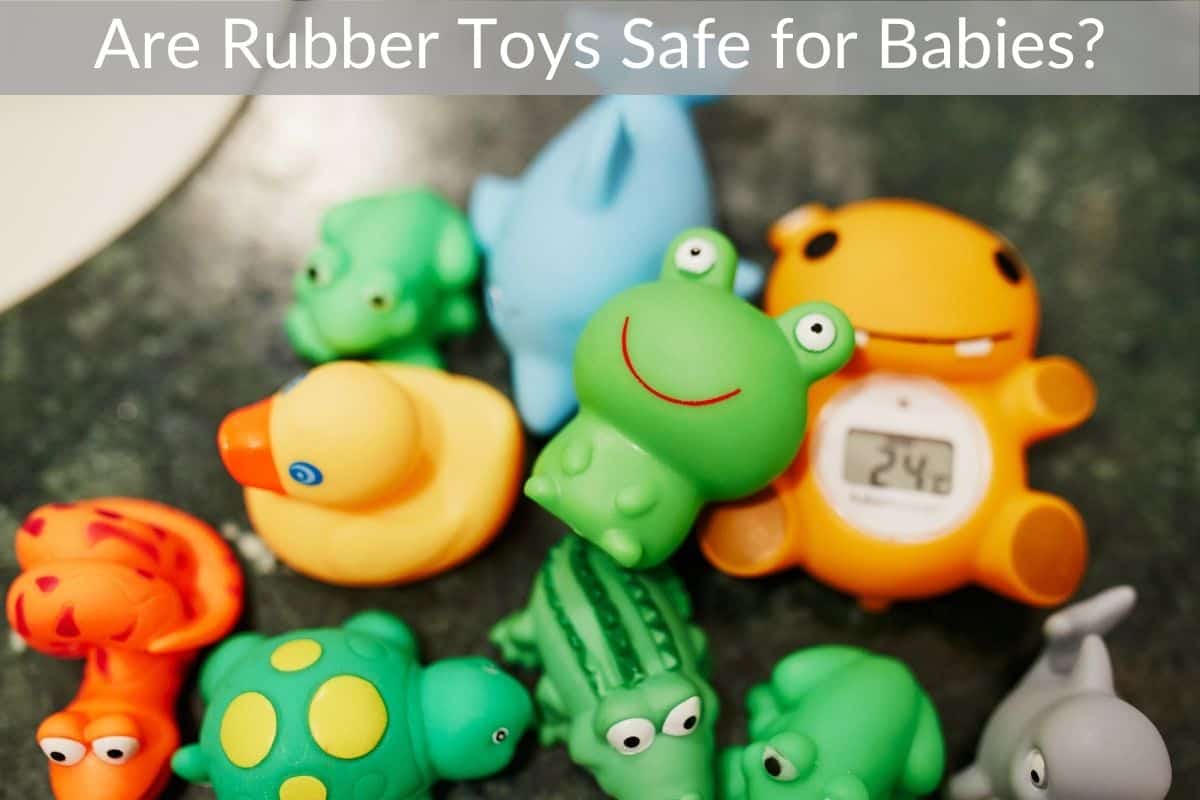 ​Raising kids can be scary. I don’t think anyone is ever truly prepared for parenthood, whether it is your first kid or your tenth.

Things change in the “rules” of parenting all the time.

What worked for our grandparents, and sometimes even our parents, are oftentimes frowned upon and deemed unsafe today.

Kids of all ages, especially in their younger years, tend to explore things by putting them in their mouths. Kids learn by putting things in their mouths and it teaches them things about an object, such as how hard or soft it is, what shape it is and how big it is.

Choking hazards, chemicals and too many other things to mention are things parents often worry about when considering what toys to purchase for their children.

​If a toy is made of natural rubber, it is safe for babies. Rubber toys are a great option for kids, especially the younger ones that tend to put things in their mouths.

Rubber is durable and is much less likely to break off or rip which can create a choking hazard for the child meaning it is also great for teething babies as it is not sharp, it is soft enough to not cause damage to the gums and it is typically pliable enough to move some when chewing on it.

While it is a great option, we also need to look at what chemicals are mixed in with the rubber to determine if the item is truly safe for children.

​Oftentimes, rubber toys have phthalates on them. It is a softening agent used to make the rubber more pliable and more desirable to chew on and play with.

The problem is that these chemicals are not meant to be ingested and they do not actually stay in the toy’s plastic, so once it goes in your child’s mouth it may start rubbing off.

​Make sure you read the labels on any toys you are looking to purchase. If it is natural rubber and phthalate free, it is likely a safe bet for your kiddo!

To see the most popular rubber toys on the market right now, just click here.

​What Toys Should Babies Avoid?

​Babies put virtually everything in their mouths, safe or not. We have to worry about chemicals, poisons, choking hazards and everything else under the sun.

Picking things that are safe for our kids can be hard, things you wouldn’t even think were a choking hazard are.

What are some toys that you should avoid giving to your baby?

​All toys given to your kids need to meet safety standards. You also need to make sure that toys are appropriate for the child’s development level, are not small enough to be choked on and that any batteries are housed in their own compartment and the baby cannot get to them.

​Batteries are made up of dangerous substances, so if they are swallowed it can lead to dangerous outcomes for the baby.

Batteries have acid in them, and if you chew on them or lick the battery it can lead to burns in the mouth and/or throat.

If the baby were to pop a hole in the battery and get liquid acid on their hands then rub their eyes it could even cause them to go blind.

Button batteries are not only choking hazards but can also cause damage if they are swallowed. If a button battery, or any other battery, is swallowed you should seek immediate medical attention.

You should also monitor your child for signs and symptoms of battery ingestion. The following are things you should monitor for

3. Pain in the abdominal area

5. Dark colored stools with or without the presence of blood

Toys that are small enough to get stuck in a baby’s airway also need to be avoided.

Always make sure you are following manufactures’ age recommendations as these are based on skill level of the toy, but also based on small parts that could be a choking hazard.

Make sure that all the toys you give your baby are at least 1.25 inches in diameter and 2.25 inches in length so that they cannot be swallowed or lodged in the windpipe.

Marbles, balls and coins that are smaller than 1.75 inches should also be avoided as they can become stuck in the throat above the windpipe leading to troubles with breathing.

You should also make sure that any toys that are given to a baby are durable and can withstand chewing and rough or aggressive play.

You should also ensure that there are no sharp ends that could injure a child, small parts that can break off or be pulled off making it a choking hazard, small ends that can reach the back of the baby’s mouth, parts that can pinch a baby’s fingers and toys that have strings that are longer than 7 inches.

Another concern when assessing the safety of a toy is the risk of ingestion of said product.

Countries such as China do not have regulatory systems in place for their consumer goods like the United States does, meaning it is hard to tell what is in them and the safety of those potential chemicals for children. It is common knowledge that toys directly from China tend to be higher in lead levels than those of toys that are made in the United States.

Many toys have stickers and other ink on them that could easily be lead based, so it is important to take that into consideration when buying toys that are from other countries.

Dangers of high lead levels in children include risk to brain development (irreversible brain damage can occur), damage to kidneys and nervous system, seizures, unconsciousness, and even death.

My youngest child had a routine lead level screening at one of his well child checks and his levels came back really high, not high enough to need treatment, but high enough to be concerned. She is baby number three for us and none of the other children (including our son, who also had his lead levels checked the same day) had ever had high levels.

We didn’t have old paint in the house and could not figure out what the cause could have been. After going through toys that he routinely played with, and put in his mouth, we came across a brand we did not recognize.

After further investigation we found this toy to be from another country that did not have the same regulatory systems in place as the United States does. We disposed of the toy, checked his level three months later, and he was back down to being in normal limits.

Prior to this we never really gave much thought to where our toys were manufactured.

As always, do your own research and make sure the products you are giving to your children are truly safe for them.