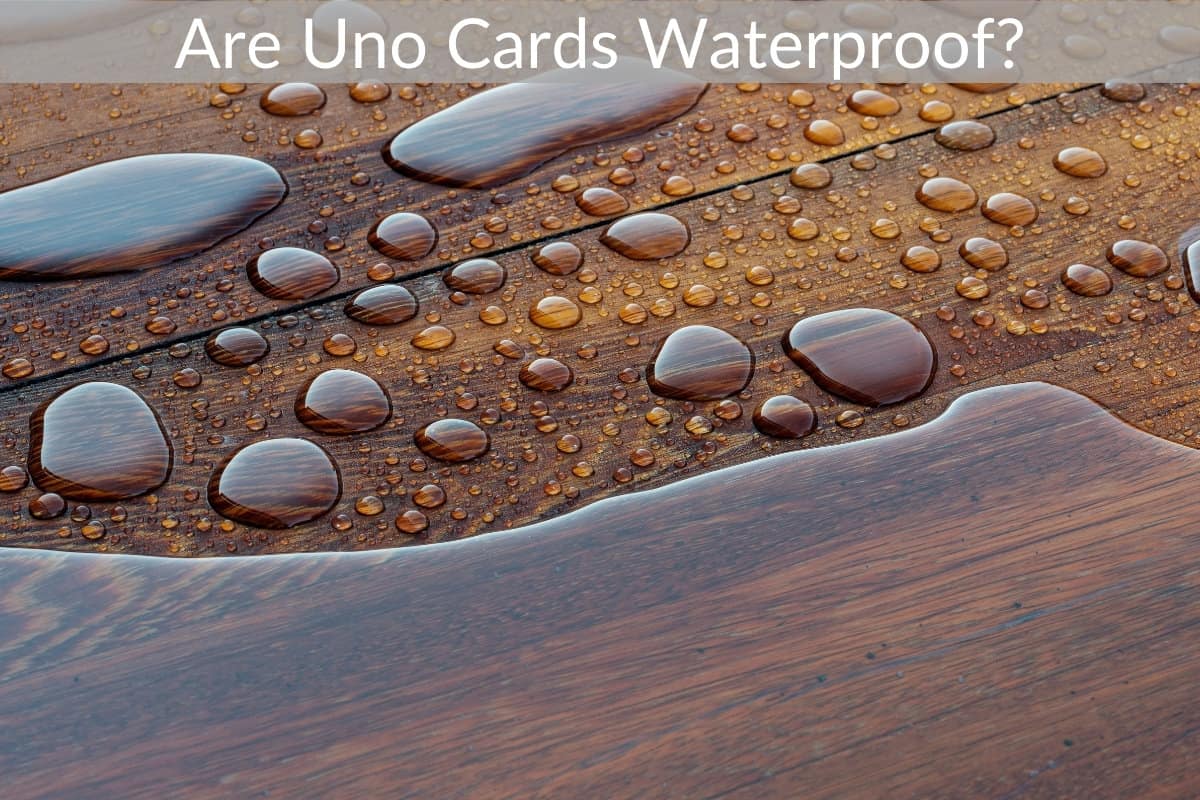 Uno is a game that you’d think would be an easy travel game. It has minimal parts with the only thing you need being the deck of cards, simple rules that are easy to teach and easier to learn, and the game is fun for everyone.

However, there are times that you might want to take your gaming outdoors. The reasons may vary, but activities that might warrant the desire to go outdoors include camping, vacationing at a beach or at a lake, pool parties, and just beautiful weather you want to enjoy.

When the need arises, it would be nice to have a great game to fit the situation.

Uno is very universal in this way, as it is a game that can be played in almost any situation. But, do you need to worry about your cards getting wet?

A standard deck of Uno will most likely be made from paper cards that are printed front and back.

The normal Uno cards, if exposed to water, are likely to get ruined very quickly. The makers of Uno have thought of everything for you, though, and they offer Uno Splash, formerly known as Uno H2O To Go, as your travel friendly, waterproof option.

The cards from Uno Splash are made of a durable plastic and are water resistant. The game also comes with a clip that helps to keep all the cards together, and allows you to attach it to a beach bag, backpack, or your camping gear.

Whatever your reason for looking into a more durable, travel-friendly set of Uno cards, you are in luck. Mattel Games has thought of everything with this popular card game.

It might be camping, a trip to the beach, or a pool party where you expect to get water on your cards, and this waterproof set will allow you to keep playing. So pick up a pack of Uno Splash and you will be set for your excursions into the outdoors when you want to play Uno in the wild.

To get your own Uno Splash set just click here.

What is the Difference Between Uno Splash and Uno H2O?

If you have been looking for a waterproof game to take on your next outdoor excursion, you are likely to have come across one of two Uno games available for purchase. The games you might have found are Uno Splash and Uno H2O.

With both games having similar titles and descriptions, you are probably wondering what the difference is. Is one more similar to the original? Does one require anything that the other doesn’t?

Both Uno Splash and Uno H2O are identical in every way except for in their name. Uno Splash was released in 2020 with a new name but beyond that nothing changed.

So you can likely still find Uno H2O both online and in brick-and-mortar retail locations, but as those copies of Uno H2O are sold, they will be replaced by Uno Splash. No changes were made to the game other than the name that was changed.

If you are considering a set of the waterproof cards available for the classic card game Uno, then you probably are very familiar with the standard game of Uno.

You might have been playing the game since you were a kid, maybe even since the 1970’s when it was first released.

Understanding that different editions of games often come with different rules, you might want to know what you can expect with this new, water resistant version of the game. One thing I will assure you of now, the name of the game still plays a part.

You do still have to call out “UNO!” when you play your second to last card.

For the most part, you will follow the basic rules for a standard Uno game when you play Uno Splash/Uno H2O. The only difference is two new wild cards which make everyone but the person who plays the card either draw 1 or 2 cards.

The Uno cards will still be multiple colors and numbers and you will still need to match either that color or number in order to play a card from your hand.

The major difference in this waterproof edition of Uno is the introduction of two new “Wild” cards, Wild Downpour 1 and Wild Downpour 2.

When these cards are played, all players draw the number of cards indicated (either one for the Downpour 1 or two for the Downpour 2) and the player that discards the wild chooses the color to continue play.

Aside from these two new cards, play is exactly the same as a standard game of Uno.

Skips, Wilds, and Reverse cards are all still going to be a part of the game. With the popularity of Uno as a card game, you likely won’t have much issue explaining this simple rule change to your friends or family.

Once they understand this new wild card, it will be just as easy as any other game of Uno.

How Many Cards Are In A Waterproof Uno Deck?

Uno has been available with plastic cards under two different monikers, Uno H2O and Uno Splash. The games are designed to be played anywhere, but specifically outside, on the beach, at the pool, or anywhere else you might be worried the cards could get wet.

Once nice thing about this set of Uno cards is the clip that comes with the cards.

The clip holds the deck of cards together and allows you to clip it onto your bags for an easy to transport form of entertainment. With the deck being so portable, you might wonder how many cards are in this waterproof version of Uno.

Just like any other standard Uno deck, the waterproof Uno decks come with 108 cards. Though some of the cards are different with the introduction of the wild downpour cards, the total number of cards is still the same.

This means your current technique of shuffling the cards will work fine as well.

For those that love card games, Uno is likely among their favorite. It is one of the most popular games in the card game industry.

Some of the fans of Uno might also be fans of the outdoors. With Uno Splash/Uno H2O, you can blend those two loves together.

The all-plastic, waterproof deck that comes in this version of Uno is sure to please your gaming needs whether you are at home or outdoors. Just watch out for the Wild Downpour card!