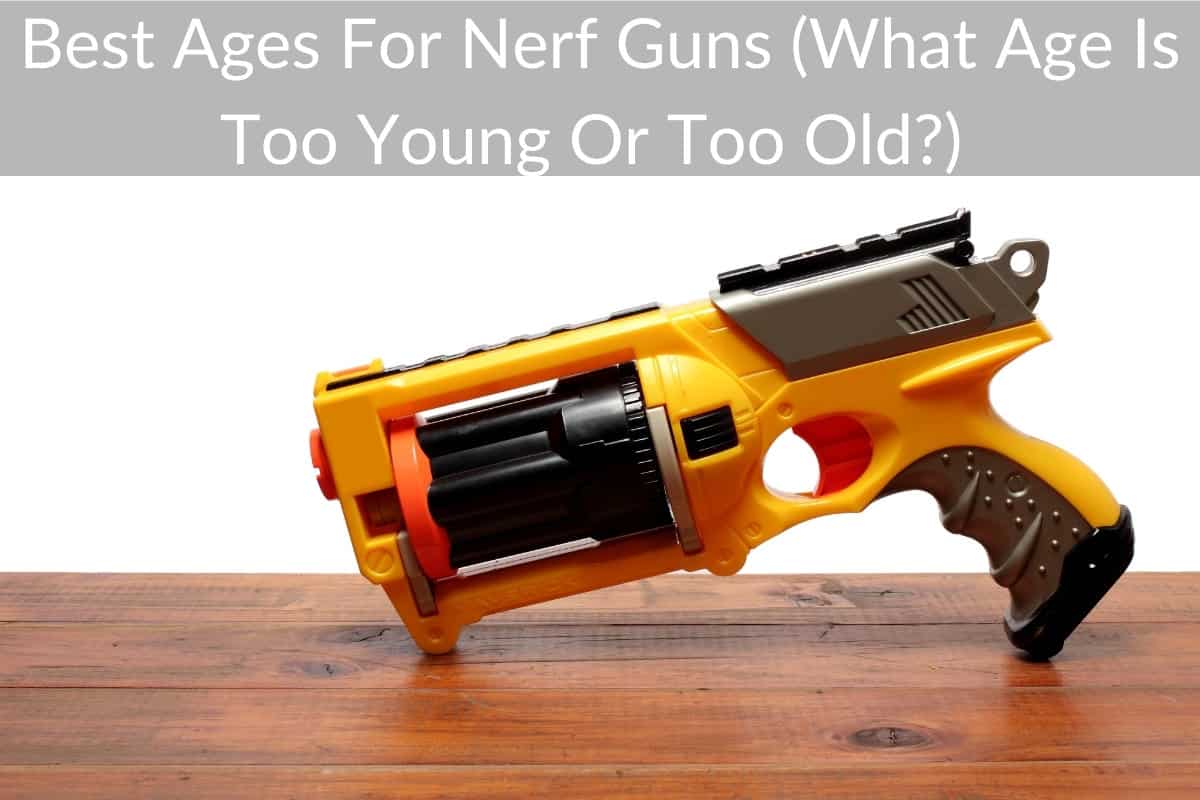 Let’s go back in time to the good old days when Nerf guns were the epitome of childhood bliss.  Those lazy weekend afternoons were jam-packed with an all-out Nerf war between your friends.

Purchasing a Nerf gun for your child can give them the same experience. However, there is always a question of WHEN to make that purchase.

Finding the best Nerf gun for your child isn’t an easy task, especially when you have really small children. So, how old should a child be to play with a Nerf gun?

While there are no set guidelines on the best ages for Nerf guns, most guns come with an age restriction that’s slightly higher than 5 years old. Any age younger than 5 will likely be too young for a Nerf gun.

If your child can handle a small Nerf gun as a toddler, then there’s no harm in purchasing one for them. However, if their motor skills are still developing, they might be too young for Nerf guns.

The best age for Nerf guns would have to be 5 years and older. They have more control over their movements and they are also developing their creative thinking process.

At this age, your child would benefit more from pretend play with Nerf guns. In contrast, younger children might not be able to comprehend the purpose of the toy or handle it well.

That said, children as young as 3 years old can still enjoy playing with Nerf guns, provided you take certain precautions to ensure their utmost safety.

What is appropriate for your 10-year-old will not be for your 5-year-old. Younger kids don’t need a lot of bells and whistles, so buying a big Nerf gun with lots of cool features will not benefit them at all and could be dangerous.

If you’re second-guessing yourself, then you’re in the right place. In this article, we’ll look through several factors you need to consider when purchasing a Nerf gun for younger kids.

Generally, when choosing a Nerf gun for a younger child, you need to treat these toys with the same care and seriousness you would with swimming pools and cars as Nerf guns can become dangerous if in the wrong hands.

In order to make the safest choice for your child, the following factors need to be at the forefront of your mind.

First and foremost, safety is the most crucial consideration.

While fatalities from Nerf gun accidents are rare, injuries are a bit more common. Darts to the eyes or any other sensitive area can result in a severe injury pretty easily.

To avoid this from occurring, ensure that anyone who uses a Nerf gun understands not to point it at other people and ALWAYS enforce that rule.

Another safety consideration is to look at whether the Nerf gun you want to purchase has small removable pieces that could be a choking hazard. Nerf guns that have many removable parts are generally deemed unsafe for those under 3 years old due to the small sizes of some pieces.

There’s a reason why manufacturer’s guidelines exist, so always check to see what the age recommendations are for the Nerf gun you want to purchase for your child.

Generally, you’ll find that most Nerf guns come with a recommendation of 8 years and upwards.

Fortunately, you won’t be hard-pressed to find some Nerf guns on the market that are suitable for kids as young as 3 years old. So all is not lost.

Ensure that the Nerf gun is easy to operate. The key feature that you want to look out for is how the gun is primed.

The priming system refers to how the blaster is activated. If the priming handles are located at the back of the gun or at the bottom of the handle, they are usually easier to operate.

Any other design can be tricky to use as your younger child won’t be able to grip the handles easily. Avoid buying Nerf guns with slide primers.

While this feature is meant to replicate the movement of a real handgun, it makes it hard for small children to operate the gun.

Even with the older kids, there are a few features you will need to keep in mind. You’ll want to look at the type of ammunition, the speed, and how easy it is for the child to hold and play with the Nerf gun.

You should also think about where your child will likely play with their new Nerf gun.

Is it going to be indoors or outdoors?

This will give you a guideline on the range you should go for. Nerf guns with a longer range are more suitable for playing outdoors.

Additionally, avoid purchasing Nerf guns with large batteries, especially anything larger than “AA” size, because they can add to the toy’s weight.

Size is crucial when choosing the best Nerf gun for any age. For the most part, you’ll find Nerf guns being classified as small, medium, or large.

Naturally, the smaller-sized guns are more suitable for younger kids. They come with 2-3 darts and don’t have much space to store the darts. This means you’ll continuously have to reload the gun, which can be a nuisance to you but safer for your 3 or 4-year-old. This category of Nerf guns is spring-activated and has a slower shooting speed.

On the other hand, medium-sized Nerf guns can store a lot more darts and have features such as rotating barrels and quick-fire loading.

It’s pretty obvious that a toddler or preschooler might not be able to handle such a gun. They are, however, perfect for 6-year-olds and upwards.

Lastly, large Nerf guns are recommended for kids older than 8. They are usually heavy and pack a lot of power. You’ll also have to fork out a lot more money to purchase these big guns.

Is Reloading an Important Feature On A Nerf Gun?

Reloading is an important feature that most parents overlook, especially when dealing with preschoolers. After all, you’re going for a recreation of the best action-packed Nerf war game.

How frustrating will it be for your child if the gun you buy has a reloading issue or they can’t do it themselves.

The best course of action is to stick to a Nerf gun with a simple reloading system. You don’t want something so complicated your child has to run to you every time to ask for help.

The point is to get them out of your hair for a few hours or to let them have fun independently.

So for your sanity, look for a gun that has a front-load option. This feature allows your child to load the darts right into the barrel. It will also make your kid’s life easier because it removes the need to navigate a bulky magazine system.

Why Does The Size And Weight Of A Nerf Gun Matter?

As we’ve mentioned before, safety is a crucial consideration. The size and weight of the Nerf gun contribute to how well your child can handle the toy.

You want your younger kids to be able to play without struggling to carry the gun around or using it properly.

A large bulky gun will require two hands, resulting in the gun falling from their hands more frequently. It’s definitely not going to make the experience pleasurable for your younger children.

To alleviate any size and weight issues, always pick a smaller Nerf gun that your child can handle with one hand.

The big elephant in the room when it comes to Nerf guns is the worry that they promote violence. There is a growing belief that keeping kids away from objects that allow them to express anger in violent ways will stop them from being violent in adulthood.

This might seem logical on the surface, but if we dig a little deeper, we’ll find that such an assertion reduces children to being nothing but the sum total of what they are allowed or not allowed to do.

Nothing can be further from the truth.

Additionally, there isn’t any scientific evidence suggesting that playing war games in childhood leads to real-life aggression. In fact, pretend play with Nerf guns has several benefits for the development of your child.

Playing imaginary games allows your child the opportunity to learn how to control impulses and practice delayed gratification.

So what are the best ages for Nerf guns?

There is definitely no point in buying a 2-year-old a Nerf gun.

You can get away with buying one for your 3-year-old, but it’s very possible that they won’t have the capacity to fully comprehend the purpose of the toy at that age.

Regardless of how old your child is, the safety considerations and features we’ve discussed in this article are extremely important to remember.

Be sure to keep them in mind when you go shopping for a Nerf gun.