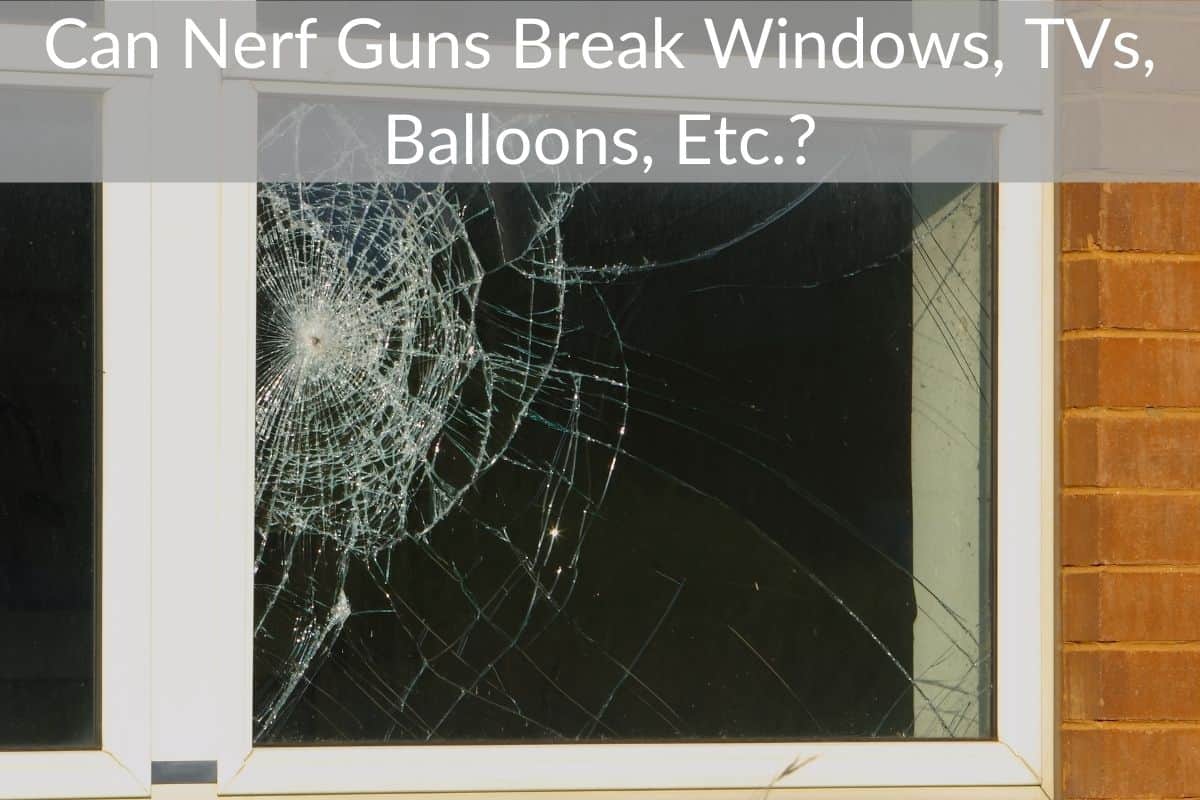 The very first Nerf creation was a Nerf ball that was said to be the first indoor ball. You could play with it inside without doing any damage to household items. It took twenty years for them to introduce the Nerf gun, but when they did, it was a big hit!

Kids and adults today still enjoy playing with Nerf blasters, but can they break things in your house?

Nerf guns are not powerful enough to break windows, TVs or glass. It’s entirely possible for you to knock over a glass vase or other precariously balanced item with a stray Nerf dart however.

You slowly move around the corner, glancing around until you see them. Your brother is crouched behind the chair looking in the opposite direction. Pulling your Nerf gun slowly up to your face, you rest your finger lightly on the trigger. You step away just a tad from the wall to get a better shot when your foot steps down on a squeaky toy and breaks the silence with the most unwanted sound.

Your sibling quickly swishes his head in your direction and you know it’s time to run. Both of you rush about the house as foam darts fly in the air.

Does this scenario bring back any memories? What about the sound of your mom’s voice saying “be careful” and “don’t break anything”? Yes, I’m sure this sounds familiar. Did you ever wonder if those little soft Nerf darts could actually break anything?

When playing with Nerf guns in the house it is best to use the simpler ones. Most Nerf guns can shoot up to 30 mph and their darts have a soft rubber tip that is safe to play with indoors. Nerf even sells some games that are meant to be played inside.

One of  the games is a precision target game that comes with two blasters and darts. Other options include the hovering target, digital target, and soft foam target cans. There is also a Connect 4 Nerf style game!

Whether you are playing solo or multiplayer these games are fun for all!

To see all of the most popular Nerf guns on the market now just click here.

Flying foam darts and laughter in the air. You’re throwing a Nerf party for your son and all of his friends are over enjoying a Nerf war. Nerf gun fights are always a blast and an enjoyable way for kids to use their energy.

Everyone is having a great time.

They run in the back door and walk quickly toward one another. Then it happens. You hear a thud and rush in to see that someone has shot the TV with their blaster. Is it broken?

A Nerf dart fired directly at a TV screen should not ruin it unless it is at point blank range. So you should not shouldn’t use your TV as a target but a glancing dart shouldn’t damage it.

However, depending on how fragile your tv screen is, Nerf darts fired at it may damage the screen. This is especially true if you are using the most powerful Nerf guns.

Soft darts are fine to play with inside and most normal blasters are perfectly ok too. But with newer Nerf guns being more powerful than ever, breaking something is bound to happen if one is not being careful.

Remind your children to play carefully just like your mom did when you were younger.

It is alway better for them to be reminded so they are thinking about it and avoiding damaging things. And when in doubt they could alway play outdoors.

Can Nerf Guns Break A Window?

Indoor or outdoors, what if the window gets shot with a Nerf gun? Will it break? Are Nerf guns strong enough to break a window or is the worst that could happen is a smudge that can be wiped clean?

Windows are pretty thick and aren’t meant to be broken easily so this means it is virtually impossible for a Nerf gun to break one unless it has been modified in some way. The darts and Nerf guns are not powerful enough to break a window.

Soft Nerf darts are fine to use indoors because this was the reason they were made. but it is always a good idea to be careful. If someone is shot in the eye at a close range it can be very harmful to them.

A Nerf gun should never be pointed at someone’s face or eyes and it’s also a good idea to wear eye protection. Nerf even sells these as accessories for your blaster.

If the Nerf dart is heavy or has a steel tip then you should be careful as this could result in broken glass. Modifying or altering a Nerf gun or its darts can be dangerous. A modified Nerf dart with a foreign object placed inside is not only harmful for breakable things but for people.

Can You Pop A Balloon With A Nerf Gun?

Are you curious as to if Nerf guns can pop balloons? Using a Nerf gun would be safer than regular darts and what better game to play at a party than pop the balloons?

Nerf guns can pop balloons but if the balloons don’t have enough air in them then the darts will just bounce off. Also if you use soft tip darts they are unlikely to break balloons.

There are games that you can play by popping balloons with Nerf guns that are really fun.

Fill the balloon with as much air as possible so it will pop easier. If you want to add some confetti into the balloon first then this makes for a fun explosion when the balloon is popped. If the game is popping balloons on a board you can put a paper with prize notes inside the balloon as well.

Next, choose what game you would like to play with the balloons and have some fun!

One game I found was where you can tie the balloons to a backpack you wear on your back and then it’s every man for himself! When all the balloons are popped the last one standing is the winner.

Some other made up Nerf activities that can be played indoors include setting up a shooting range, Nerf gun tag, obstacle course while someone shoots at you, last one standing wins/every man for himself,or guarding something.

Playing with Nerf guns is enjoyable for all ages. It doesn’t hurt if you are shot with the foam darts and they won’t damage household items unless they are shot at very close range or the player is using a powerful Nerf blaster.

Being careful is always key.