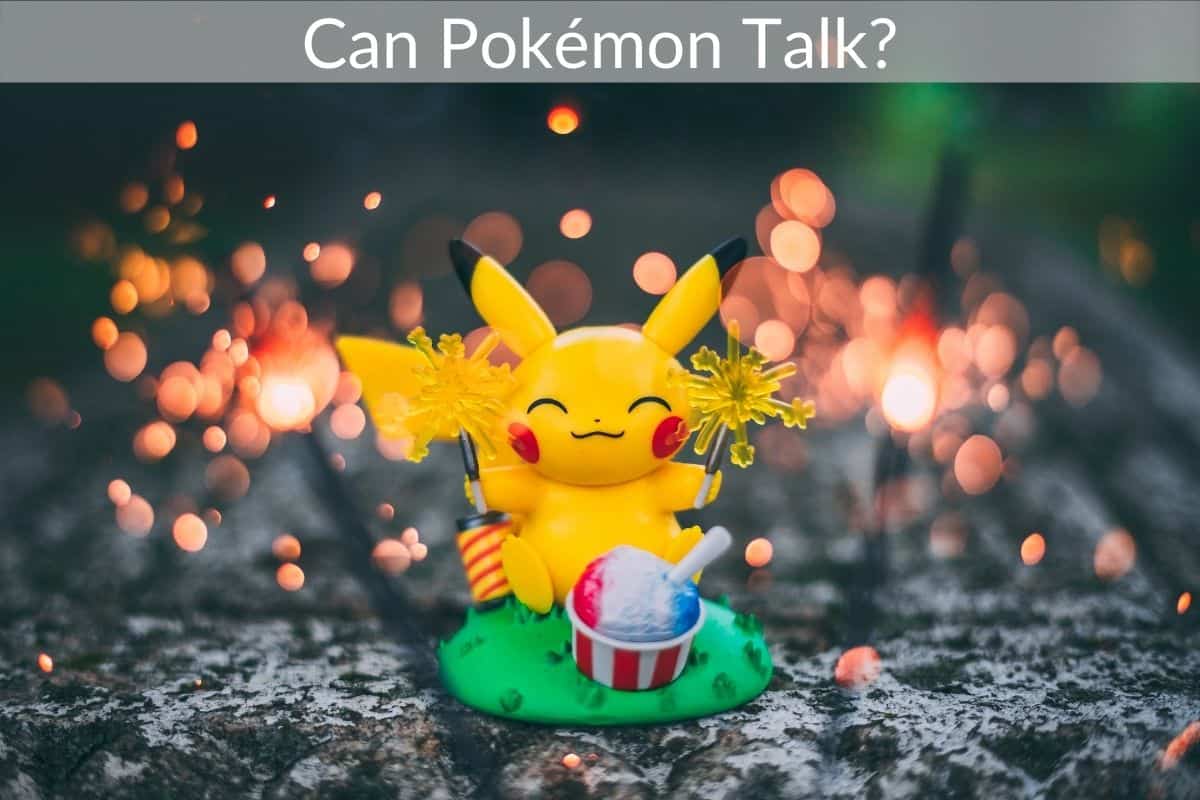 Are you someone that has fallen into the “trap” that is known as Pokémon? Have you become obsessed with collecting every last one of them in your video game or with trading cards? Well, I wish all the power to ya on your long journey ahead.

You may be asking yourself some questions about Pokemon, like: Can they all fly? Can any of them live forever? Or can any of them talk? And what language do they speak?

Well here is a short answer to one of those questions.

Some Pokemon can talk such as Meowth in the TV series. However most of the Pokemon simply say their names over and over again with different inflection or emotions.

There are some different ways that Pokemon can talk and things that they understand.

While all Pokemon that we know of can understand human speech, there are a limited amount that can talk. But, many legendary and mythical Pokemon can actually talk.

In most cases, the ones that can talk, speak through telepathy. One in particular is Meowth, the most famous talking Pokemon that also makes the most appearances. Also, all Pokemon can speak their specie’s name as mentioned above.

Can Pokémon Talk To Each Other?

If you saw any of the movies or TV series starring Pokemon, then you probably saw them talking. The question might be brought up if the Pokemon can speak to each other. Afterall, they are different species; and, as far as we know, in our world, different species of animals do not tend to understand each other when speaking.

Despite apparently speaking only their own species’ name, Pokémon seem to be able to communicate with each other without issue.

But how do they do this? Let’s find out.

In “Island of the Giant Pokémon,” there are subtitles for what the Pokémon are saying, and evidently they could understand each other perfectly. And there you have it. Pokémon can talk through subtitles, haha, just kidding.

There must be a universal language that they use to communicate with one another and most people believe that it has to do with the inflections and how they say their names.

If you have watched any of the Pokemon TV show you will notice that when the Pokemon are said or excited the way they say their name will change quite a bit.

Most people feel that this is how the Pokemon understand each other, through nonverbal cues and through the different ways they say their names.

There has to be some way that Pokemon can learn to talk to humans, I mean they learned to talk to one another with no problems it seems like. We as humans are able to learn multiple languages, it may take some time, but we are able to do it.

But can Pokemon learn to talk normally? Let’s dive into it.

Meowth is not a psychic Pokemon yet he has learned to talk to humans normally. This is believed to be because he just continually worked at it and was able to pick up the language over time.

Since Meowth was able to learn to speak normally it stands to reason that other Pokemon could as well. However, for whatever reason none of the Pokemon ever learned how.

This ability to speak coherently in the human tongue for Pokemon has been more reserved to the powerful psychic types of Pokemon. These ones use the art of telepathy to project into the mind of humans.

The only exception in the entire pokemon universe is Meowth. He is physically able to talk to humans, but why?

The explanation, Meowth actually put in a whole lot of time and practice to learn to speak in the human tongue. It may just be his particular species, but it makes you wonder if the entire universe could learn how to speak with humans normally if they just took the time and put in some effort to learn it.

What Is The Pokemon Language Called?

We have many different languages in our world that are usually named based on the region we are from.

Could it be the same in the world of Pokemon?

The Pokemon language was introduced in the latest Pokemon games as the Galarian language or Galar Language. It is a unique series of characters which is intended to represent the language used by the people in the Galar Region, and can be found everywhere in the region.

To be honest, to us this may just seem like gibberish, but it does have a point to it. There are some symbols that are used for multiple of our normal letters, but each word is pretty simple to spot if you have seen it enough.

Some people may think that the letters are just random, but if you study it a little bit, you can see an actual pattern in the written language.

How Do Pokemon Communicate with Humans?

You may have seen in the show or the games that a Pokemon can communicate with humans and vice versa. The Pokemon can actually understand human language, but they have unique ways of communicating with us for us to understand them.

The most common way that Pokemon communicate with humans is through their cries or the way that they say their name. Often they will show that they are upset by their tone and body language.

Each Pokemon will use their “cry” when trying to communicate with humans, this “cry” is usually just different variations of their species’ name. Sometimes a Pokemom will speak using an illusion, this ability is somewhat temporary, but they can use it to create something that actually is able to talk.

Body language is another way that they are able to communicate.

These gestures can be very dramatic or very subtle, but the Pokemon will use them to make known what they want or need.

One of the more popular ways of communication is the physic-type Pokemon. This is natural for some types of Pokemon, especially for the legendary or mythical Pokemon.

The next way of communication that they use is through intuition and emphatic trainers. Some trainers that are naturally emphatic, or have plenty of experience, can get to know the moods and emotions of their Pokemon very well. This can allow them to communicate intuitively.

In the games, very rarely can a Pokemon talk to a player, and if they do this is usually limited to just one line. Sometimes a Pokemon is able to speak telepathically via another person.

Along with this, Meowth will usually translate their language for a player.

A rotom Pokedex is a special innovation to make it easier to communicate with the Pokemon. This is an electric/ghost-type Pokemon whose transformation is meant to look like an ordinary household appliance.

These are quite rare and were created in the Alola region to make human-Pokemon communication easier.

Just like a parrot, some Pokemon can be taught to mimic human speech. And lastly there is Meowth, the only known Pokemon that can actually speak in the human language.

He practiced a lot and was able to get an understanding of the human language.

There may be other ways that a Pokemkn can communicate with the humans, but these are the most known/seen ones in the games and series. You may even know a few other ways.

At the end of the day, I guess that you can say that Pokemon can communicate at the very least, and some can actually even talk.