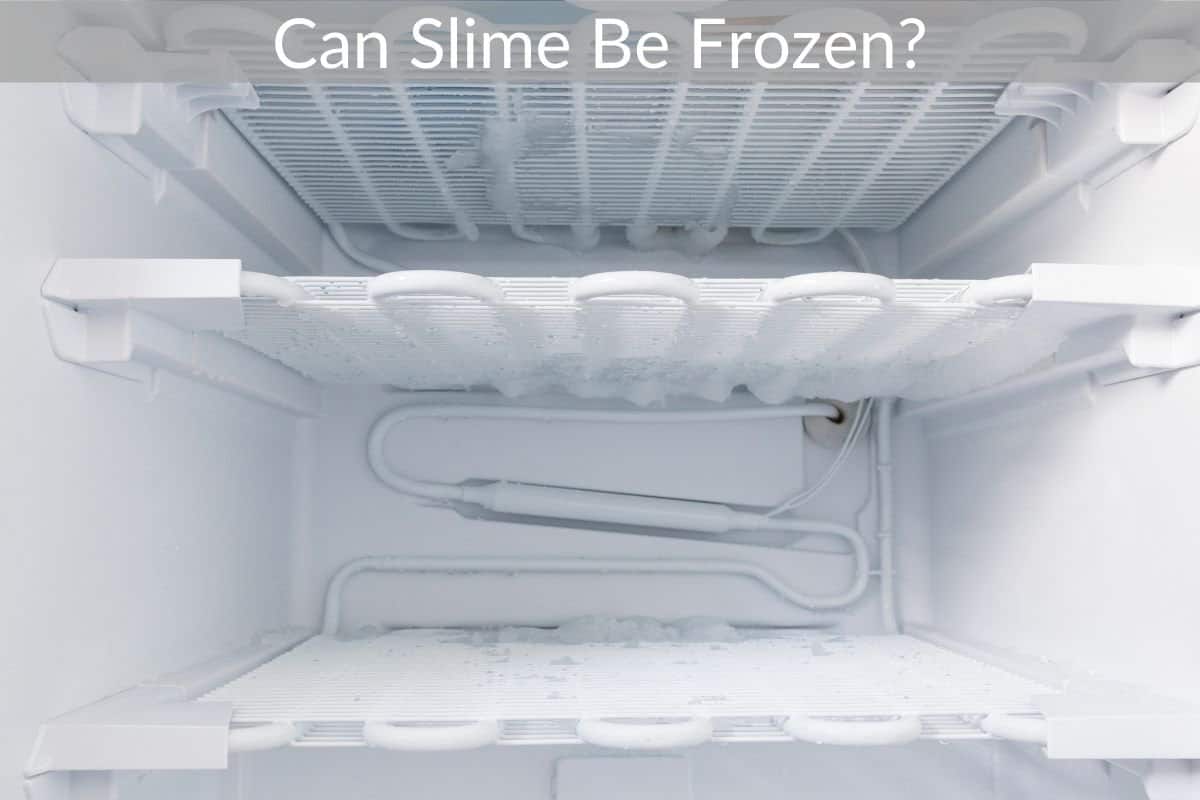 Slime is not only a great indoor activity to keep children occupied for quite some time, it is also a great science experiment as well.

While slime is for sure a fun activity for all ages, it is something that does not last forever. The longer slime has been played with and exposed to air, the faster it will break down and go bad. One of the ways to keep slime better for longer is to freeze it.

While the slime can be frozen, this does not necessarily mean that your slime will last and have its elasticity forever; even frozen slime has an expiration date. Another thing to consider is that frozen slime does pose its own problems.

For instance, if your child wants to play with the slime right now, there does need to be a waiting period of “defrosting” before the slime is back to its fun, elastic self.  Often by the time the slime has thawed your children will have moved on to something else.

Another issue with frozen slime is it can be really messy if you aren’t careful. If you ever put your slime in the freezer and then quickly slide the door out… you will quickly find that slime all over your frozen meat and veggies isn’t a good option.

Slime is relatively inexpensive so if you can’t stand the slime always being in the way in your freezer then leaving it at room temperature won’t hurt it… it will just make it not last as long.

How Do You Use Frozen Slime?

Freezing the slime is not only a good way to help preserve and keep the slime longer, it can also be a great teaching moment.

You can let your kids play with the frozen slime and experiment with how long it takes to thaw when left alone or when it’s being played with. You could also just take the frozen slime out and let it thaw before they start using it.

Once you have removed the slime from the freezer, there are basically two options:

Begin to play with the slime immediately

You can start playing with the slime once taken out of the freezer. While the slime may not be soft and malleable, it can still be played with and the different sensations can be fun for many kids.

The slime can be broken apart and made into building blocks or whatever your child can imagine. Once the slime has been played with for a bit, it will begin to gain its elasticity and malleability back as it warms up.

Wait to play with the slime until thawed

For most parents it’s easier to just let the kids play with the slime while frozen but if you don’t let it thaw first you will be much more likely to find little pieces of slime everywhere from when it was broken apart while frozen.

How Do You Use/Fix Old Slime?

The rain is coming down hard outside, so it looks like the kids are indoors all day today. You go to get the slime only to find that it feels rock hard and has zero give and stretch.

You do not have the ingredients to make more, so what to do?

Here are a few ways with some ingredients you might just have lying around at home to help give that old slime back some of its stretchiness.

Seems simple enough. When skin gets dry and needs a little hydration, lotion is the way to go. The same principle of hydration goes for the slime as well.

Slowly add the lotion to the slime and knead until you can start to feel the elasticity coming back.

Again, it seems so simple. On a hot day, what do you do for hydration? Water! Usually the slime will need no more than a spoonful of water to get its moisture back.

Once the water is added, knead your ball of slime back to its stretchiness.

With this option, it might be wise to take inventory of any cuts and scrapes on your hands. Once you add the hand sanitizer and begin to knead, if you have any cuts you might want to consider a different option.

All you need to do is add a drop or two of hand sanitizer and begin to knead.

While not always the case, maybe your slime just needs a bit more glue. If you used glue in the slime’s “creation” process, then glue would be an acceptable source of moisture for the slime.

Again, just slowly add a few drops and then knead until the slime is moldable again.

How Do You Store Slime?

Now that you know how to restore slime and freeze it, is there a way to store it so it won’t go bad so quickly?

Again, just because the slime has been stored and stored properly does not mean that the slime will last forever though. How the slime is stored though does help extend the playtime life of the slime.

Here are a few different suggestions on how to store slime.

Everyone has a set, or at least a bottom and a random top. Good news is, if you can find a matching top and bottom, you have a great container to keep your slime in.

If you divide the slime up between children, then some of the smaller sized containers might work. If you created a giant batch in science class, then a sandwich container most likely will not fit the slime, and you will need a much bigger container.

Glass jars are another great way to store your slime. Not only can you store the slime, but you can give it a bit of personality as well.

If you have created some orange slime around Halloween, all you need is a sharpie to make your stored slime look like a pumpkin. White slime can be turned into a ghost for Halloween; erase the face and snowman for winter.

You can get pretty creative with the colors of slime and the look of the jars you store it in. Again, if you have made a small batch or are dividing up the slime amongst children, then you can reuse baby food jars to store the slime.

If the batch of slime is a bit bigger, then a bigger sized mason jar will probably be your go to.

If you don’t feel like scooping out some dry or even moldy slime from plastic containers or mason jars, then sandwich baggies might just be the way to go. The only downside to sandwich baggies is how long and fresh the slime will last.

The plastic container and mason jar will get you pretty close to a month, but with the sandwich baggies, you will be lucky if you can make it to the end of the week. The reason being that no matter how hard you squeeze all the air out of the sandwich bag, there will always still be some air inside.

While there are these three different options to storing your slime, each storage option can also be placed in the fridge or freezer to help keep the slime good a little longer as well.

Whichever your preferred method of storing and keeping the slime, as long as the slime is enjoyed and played with is the most important thing.