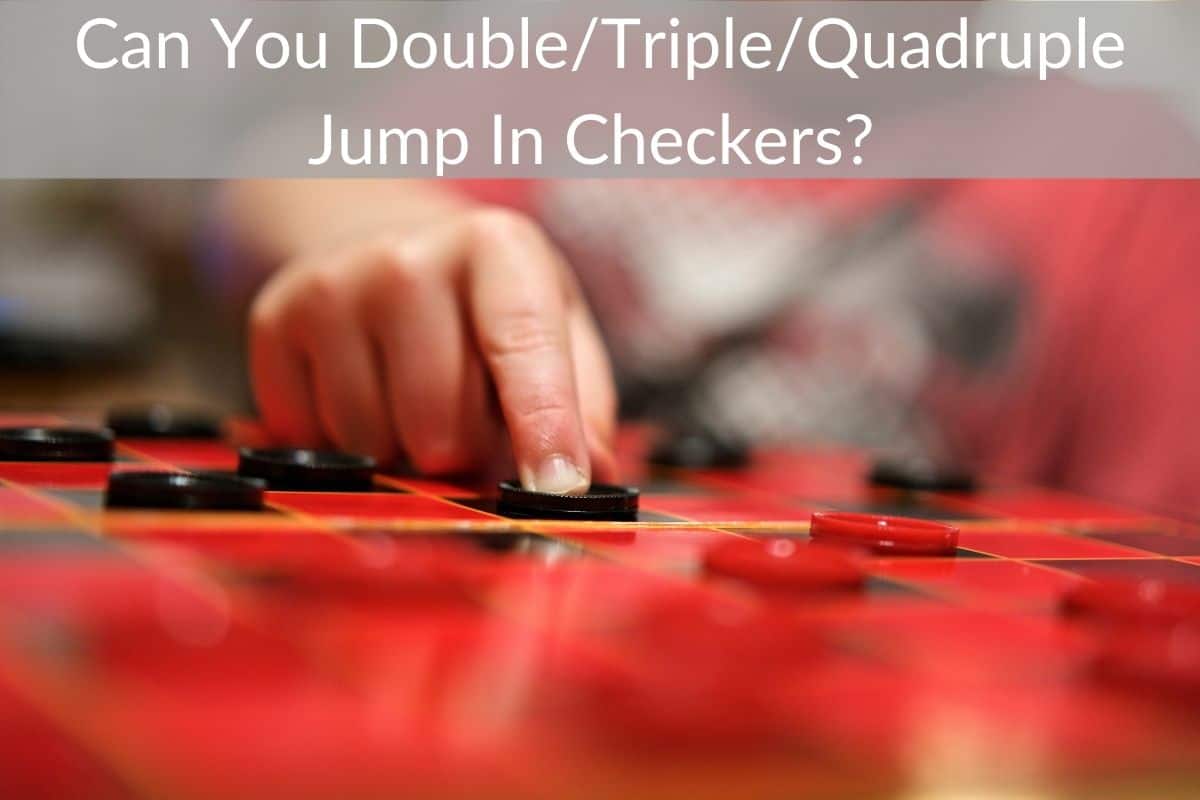 That moment you have when you’re looking frantically all around the alternating squares on the checkerboard, trying to find that opening. You’re wondering if this is the right move to make.

Sweat from shaking nerves seem to collide with the heavy pounding of your heart as you stare in concentration between the red and black squares in front of you.

You’re certain the next move you make is correct, so you grab the black piece on your square and proceed to put it at the next diagonal square available.

Confidently you take your hand away. No more second guessing yourself, you completed your move.

Understanding Checkers is very beneficial to playing the game. You need to be confident in your knowledge so you can play and hopefully win the game. Knowing how to properly jump your pieces, will save you tons of time and help you win the game.

Knowing if it is possible to double, triple, even quadruple jump with Checkers is an important part of the game. So… can you?

Not only can you double, triple, or quadruple jump in checkers but you are actually required (by the official rules) to jump if you can.

So not only can you jump that many (or more) times but the rules expressly tell you to do so. Even if after jumping it means that your piece will be captured you still have to make the jump.

If you have multiple pieces or directions that can make a jump at the same time then you can choose which jump you will take on your turn.

Knowing the rules of checkers means you can train your mind to find ways to think more than what’s presently in front of you. You can think up more scenarios to help you win.

This is critical thinking. It’s a useful skill if you’re in business or school as you need to out think your competition in business.

You need to think several steps ahead if you want to reach an end goal.

Checkers helps your mind improve so you can think of more than the present status in life.

Knowing the rules of Checkers will help you compete with confidence as you want to defeat your opponent quickly! Of course if you have someone you’re playing against that’s a little above your level that will help you improve as you need to think more in advance to capture their pieces.

You capture a piece by “jumping” over your opponent’s piece into an adjacent diagonal square. When you successfully “jump,” you have captured the piece. But can you do more than one jump? Possibly multiple jumps?

If you can line up your pieces on the board correctly, you can watch your opponent for further moves that will become available.

Obviously you don’t want your own pieces to be captured so if you can successfully “jump” your opponent, don’t immediately let go of your current piece.

That will signify that you’re finished with your move.

Instead, look further at the board. After your successful jump, see if you have another piece that’s again adjacent to your diagonal and there’s a free space once more after that diagonal. If so, you may jump again.

If you only have a regular piece, you may only jump in the diagonal forward position. If you have a king however, you may jump forward and backwards in any diagonal position you may see available.

You may keep jumping if it’s possible until you reach the end of the board and have no more options available.

If you’re using a regular piece and reach the end of the board, then your turn is finished as you will be crowning that piece into a king. If you’re already a king, and you see another spot to jump after you reach the end that’s an adjacent diagonal, you may continue to jump.

So in answer to the original question, yes, you may double, triple, and quadruple jump if the opportunity presents itself.

Knowing how to properly jump your opponent will always be beneficial to the game that you play. You always want to capture your opponent’s pieces so you have a better chance at winning.

Jumping as often as possible will help that endeavor. Hopefully in your next game you can win by jumping all possible jumps in your next turn.

To see the most popular checker sets just click here.

Can You Get A Triple King In Checkers?

If all you know are the basic Checkers rules, you may find that an impossible number. However, as you learn more about the game, you will discover so much more than you originally thought and also that you have more options to defeat an opponent.

One of the basic moves taught to new Checkers players is becoming a king. That’s when you have a single checkers piece successfully crossing to the opponent’s side of the board, thereby becoming crowned king.

But can that crown get any higher? Is it possible to become a triple king? If so, do you get any extra benefits to that triple king? Such an important question deserves an answer.

In the normal game of checkers your checker piece can only become a king and there is no such thing as a double or triple king. However there is a variation of checkers called Tiers that allows you to get multiple layers of kings every time that you cross the board.

In the Tiers checker variation if you can successfully get your single checkers piece to the opponent’s end line of the board, you then have that piece be crowned a king.

Then you have all the benefits of becoming a king which includes being able to jump your opponents pieces in any forwards and backwards diagonal position that’s available. That is a very handy ability to have when playing the game.

But now that you’re crowned king, is that the limit to your abilities? Not in here Tier variation!

Take out as many of your opponent’s pieces as possible in your journey back! That’ll help you to win!

If you can successfully get to the opponent’s end, and then make the journey back to your original end, your king’s crown becomes a little higher!

You get to add a third piece to your stack. Officially, you have earned the title “Triple King!” But are there any new moves you get to explore with this new status for your triple king?

With a triple king in the Tier version of checkers of course you can still jump your opponents pieces and go forwards and backwards. But now you get to add two new components to your arsenal.

Your triple king can now get friendly pieces to travel faster AND you can jump two enemy pieces that are right next to each other in the same diagonal direction at one time!!!

This gives your game a whole new element to help you win. Being a triple king can boost your collection of enemy pieces, and hopefully be a deal breaker in winning against your opponent.

Getting from one end of the board and back again can be a challenge, but it’s definitely doable. It comes with another fancy piece added to your original crown making it a triple king.

No more puny single king for you! You have a future that you can think of further than the common king! Not to mention that you now have two new moves available in your arsenal against your opponent.

Being able to jump two pieces at once is a huge development in your game. Of course helping friendly pieces move faster is an added bonus.

That’s the benefit of playing the Tier variation of checkers.

Hopefully now you can win your next Checkers match and maybe become a king in your own right. Who knows? Maybe being a triple king will become your new secret weapon you can unleash to win!