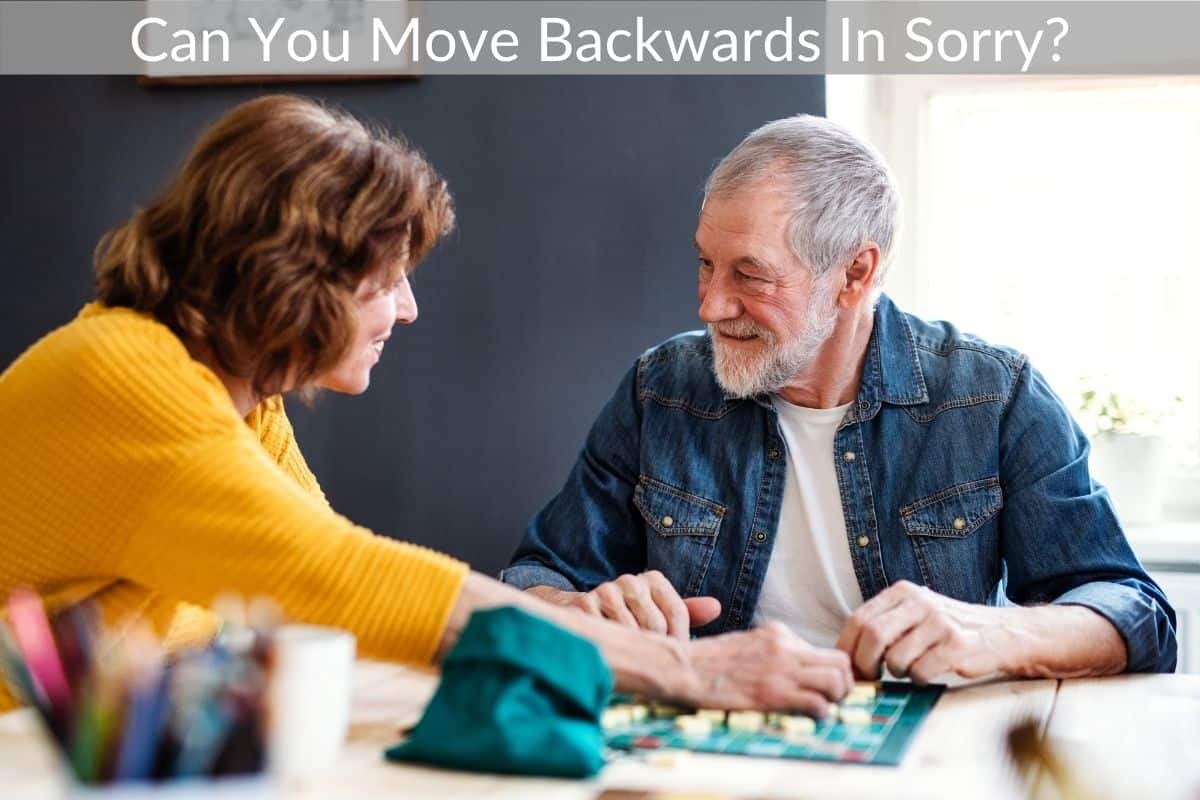 Have you ever almost won a board game and then lost? There’s probably no bigger disappointment than the feeling you get when you lose a game you almost had under control.

Think about chutes and ladders, for example. One wrong move can bring you right back to the start, which is the case with the Sorry game too. While the deal is to keep moving forward, here’s the tricky question, “can you move backwards in Sorry?”

Moving backwards in a game might seem like a bad thing… however that isn’t always the case. If you are on start and you move backwards 4 spaces you can now go immediately into your home spaces rather than needing to go around the board!

I will cover more about this fun little strategy in the next section.

Is Moving Backwards In A Sorry Game Bad?

While moving backward generally entails you moving only slightly farther away from your home or safety zone, it isn’t necessarily a bad thing, and here’s why. If you can successfully move a pawn backward by at least two spaces beyond your personal start space. you can then move into your safety zone on a subsequent turn without having to move throughout the board.

In this way, your pawn gets to be home much quicker than the rest. That’s why using a ten to move backwards can be so powerful as if you are lucky enough to draw another ten or a four, you can then move up into your safe zone on the next turn.

Drawing a 4 when your pieces are spread out across the board will hurt your progress but if you have a piece near the start then it can substantially improve your chances of winning the game.

Can You Move Backwards In A Sorry Game And Still Win?

Moving forward or backward is not a decision you can make on your own. For the entirety of the game, it’s the cards you draw that decide the fate of your pawns.

Winning a Sorry game is all about being the first player who gets all their pawns into their home circle. However, all your game pieces or pawns have to enter the home circle by exact count. So if you have all your pieces in the safety area but draw a four… then you have to move your piece out of the safe area.

Which Cards Can Move You Backwards In Sorry?

The 4 and 10 cards are the only ones responsible for making you move your pawn backwards. As I stated earlier, it is possible to get to your home zone by moving backwards if your pawn can move at least two spaces backwards from the start zone.

This saves you from the hassle of moving throughout the board; however, if you cannot move at any time, your turn ends.

Even though going backward is at times beneficial, going forward is the only definite way to make progress. However, there are cases where even moving forward will not be enough since there is always a chance of being knocked out by your opponent.

Here are the cards that help you move forward:

One – Move forward by one space

Seven – Either split the move between two of your pawns or move forward by seven spaces.

Ten – Ten typically presents you with two ways. Either move a pawn forward by ten spaces or one pawn backward by one space. In this case, moving backward can work in your favor if it’s about knocking out the opponent pawn.

Eleven – Either move forward by eleven spaces or replace your pawn with an opponent’s pawn if it’s in the same playing area.

Why Are There More Forward And Less Backward Sorry Cards?

There are more cards to move you forward and fewer to move you backward because reaching the safety zone is much more likely by following the forward cards.

Again, moving forward can also be tricky, especially if your opponent lands on your occupied spaces where they can then send your piece back to start.

If there were too many backwards cards it would make people want to stay near home so they could go backwards all of the time rather than trying to go forward around the board.

How Do Occupied Spaces Work In The Sorry Board Game?

The general rule about occupied spaces is that two pawns cannot be together simultaneously on that given space. Hence, if a card asks you to place your pawn in an occupied space, it may come down to two things:

➢ Sometimes it may be an opponent’s pawn, and sometimes it could be yours too. If it is an opponent’s, you can send their pawn back to start by placing your pawn in that space

➢ However, if it’s yours, then you won’t be able to replace the pawn. This means you either forfeit your turn or play the other pawn. You cannot send your own pawn back to start.

Is Sorry Really A Game Of Luck?

The Sorry game is often considered a game of luck because, after all, it’s a bunch of cards deciding your fate instead of your own moves. However, the game is not entirely about luck, at least not according to my own understanding.

If anything, it’s a blend of luck, reasoning, and diplomacy.

While luck plays into the game a little bit, it only lasts for the first few attempts of drawing your cards. The rest of the game is all about making the right decisions. For example, have you ever noticed that there are no 6s or 9s in the cards? This could be useful information when planning your strategy to move the pawns.

This means that keeping your pieces six or nine spots before home is not a smart idea, but keeping them the same spots away from trouble can reduce your risk of getting in trouble.

In the same way, many other insights can play out in your favor only if you pay enough attention instead of drawing your cards.

What’s The Best Way To Win In Sorry?

Again, winning in Sorry is all about drawing the right cards. It’s important to stick to moving forward rather than backward as the chances of you ending up in the safety zone are less likely if you do the latter.

Take it from someone who has played the game enough to tell you that going ahead by bigger numbers is always a great way to reach your home or safety zone faster.

So, can you move backwards in Sorry? Yes. Is it always a good idea? No. Depending on your strategy to move forward, backward, use the spaces correctly and attack the pawns, you can eventually determine your own destiny in the game.