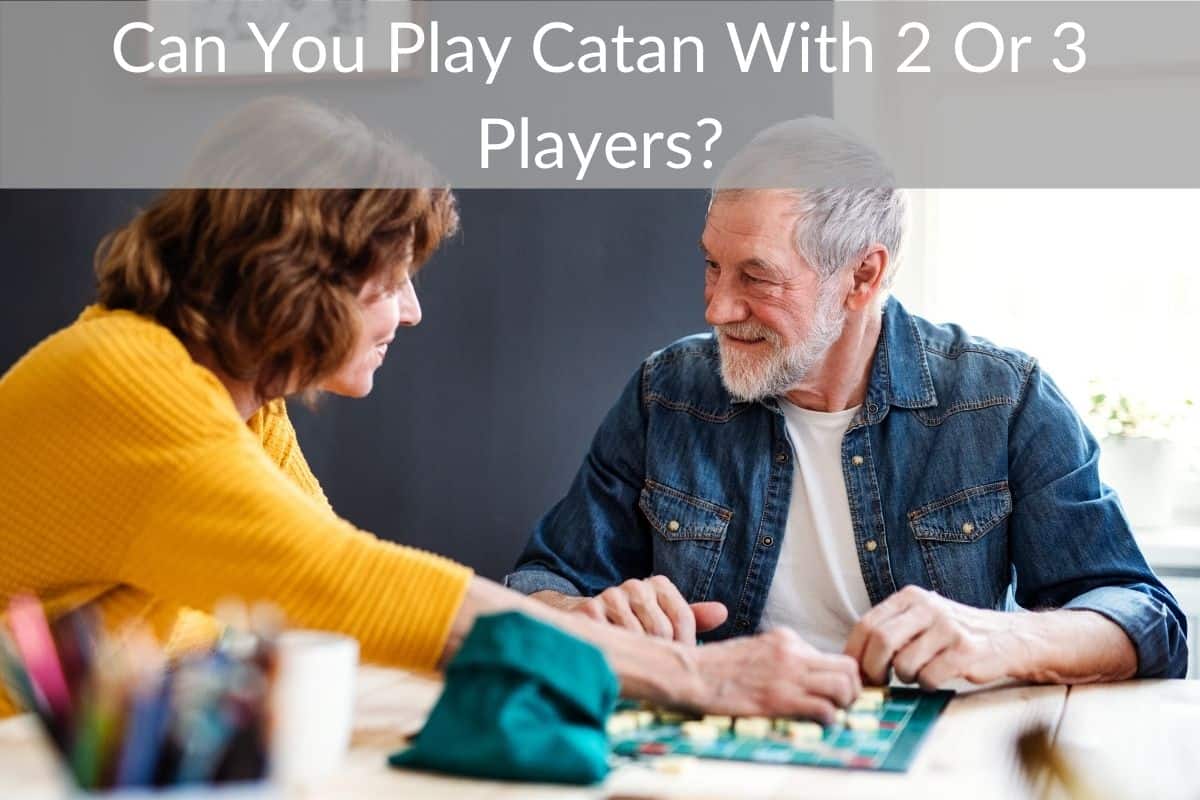 Catan is a game of trading and expansion. It has sold more than 20 million copies since it was released in 1995. Celebrities Kristen Bell and Carly Rae Jepsen are fans of the board game.

The game itself isn’t too complex and is relatively easy to play. You trade, build, roll the dice, and move along the board collecting points to win the game. Catan usually takes about an hour to play and you use some strategy but nothing crazy.

Normally, Catan is played with 3 to 4 players. But can you play with just 2 or 3?

The board game Catan can be played with 2 or 3 players. If there are only two of you playing the game, it is totally fine although you may run into a few hiccups along the way.

If 3 people are playing Catan, you can play normally because the game is for 3 to 4 players. The play of the game may be affected if you are only playing with 2 people.

In the early stages of the game one player could start doing really well and run away with it. There is a variation of Catan that can be played with only 2 people. Some of the rules are changed a bit to accommodate for the small group playing the game.

Many people say that for a two player game of Catan, the play was unsatisfying and is better if you play with the required 3 or 4 players. There is a Catan card game that can be played with two players only. If you only have two people to play Catan you can always whip this game out and play it.

Even with all this criticism there are still some that say playing Catan with only two players may get a little confusing and probably won’t work as well but it can still be fun to play.

To see the most popular Catan sets just click here.

Can Catan Be Played With 3 People?

So, you can play Catan with two players. It just won’t be the same kind of playing experience as it is with more. But can Catan be played with 3 people?

Catan is a game that is designed for 3 to 4 players so yes, it can be played with 3 people.

Three to four players is ideal for a game of Catan, however there are certain rules you have to follow to play with only 2 people. Catan for two players can still be fun to play. Playing Catan with 3 or four people makes for the best times playing the game.

If you are playing the settlers board game with 3 people, sometimes players may end up with too much space.

Yet, it is also said that four can be too crowded. All in all, three to four is the ideal amount of players to play the board game consisting of building and trading.

Follow the rules of Catan and play as you normally would if you are only playing with three people. The game is made for this amount of players.

Can You Play Catan With Just 2 Players?

i already mentioned that Catan can be played with just two people but now you may be asking how? And how can the game be set up for only two players?

You can play Catan with only two players. It may be a little difficult but will still be fun.

When setting up Catan for two players, follow these simple steps.

First, remove one of each of the Fields, Forest, Pasture and Mountain hex tiles. Then remove the Desert hex tile.

Next, place the number markers on the board in alphabetical order, starting as shown in the diagram. B and H go on the same tile as shown and you should discard the P, Q and R markers.

The robber stays off the board until a “7” is rolled with the dice. Remove 2 of the roads, 1 settlement and 1 city from each player’s supply to accommodate for the lower number of players.

Finally, you will need to remove 3 Soldier, 2 Victory Point, 1 Road and 1 Monopoly cards from the Development deck. Now you are ready to play.

The rules are played normally, with 10 victory points needed to win the game. Players can only trade with the bank and not with each other in this two player game of Catan.

The Catan 2-player set-up diagram will help with placement of the tiles and to understand more of how the game is played visit the official Catan website.

How Do You Set Up A 3 Person Catan Board?

A game of competition and strategy, Catan is great for all ages. You can trade and move your way to victory across the gameboard. Is there a certain way you set up a 3 person Catan board?

There are steps you can take to set up a Catan game with only three players. However, the regular rules and setup should work fine since the game was made for 3 to 4 players.

Playing Catan with 3 players is easy and fun. To set up the Catan game board, first remove one sheep and one brick hex tile from the game and replace them with two more desert tiles.Then remove the 2 and 12 discs from the game, because these won’t be needed.

You will also need 15 tokens to use as gold. Next you will want to use the Harbour Master entitlement card that counts as 2vp’s.

This card is the player with the most settlements/cities on port spaces receives the Harbor Master card. You will have this card as well as the standard ‘longest road’ and ‘largest army’ entitlement cards.

Finally, following the instructions in the main rule book, set the game up as you normally would for three players by placing the 15 gold tokens in a pile in the middle of the game tables so that all players can easily reach them.

The game of Catan featuring settlers, trading and exposing land, and is fun and easy to play. The game says it requires 3 or 4 players to play, however, if you only have two people to play the game it can still be done but with a few tweaks in the rules.

The gameplay may not go as smoothly as it would with more players but can still be fun. A three player game is played how it normally will be, although you may need to set it up a little differently.

Have fun enjoying your 2 or 3 player Catan game.