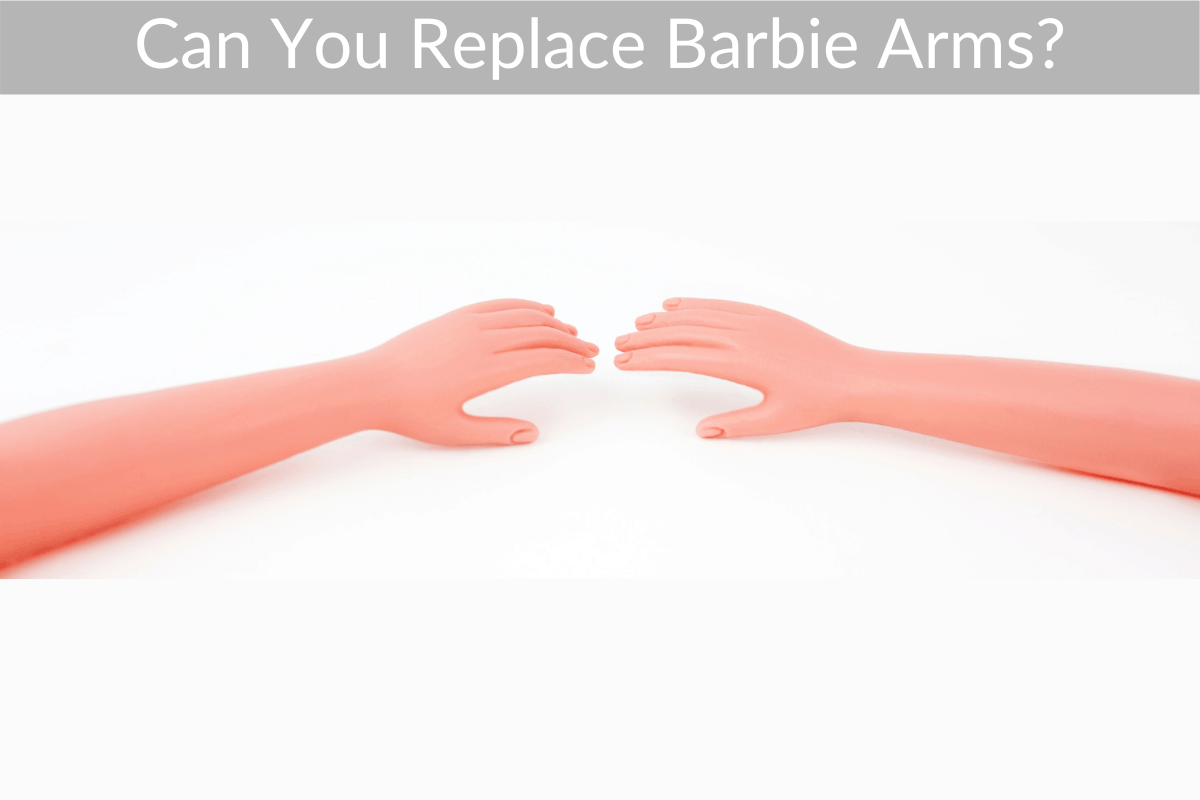 Barbies are a wonderful toy that most young girls had as children. Perhaps you have a child who you bought the toy for or are a collector of Barbies and have had the misfortune of having the arm of one of your beloved dolls come off.

If this is you then you are likely wondering if there is any way to fix your Barbie’s arm or replace it.

Thankfully, replacement or repairing of a Barbie arm is not too difficult, and can be done in the comfort of your own home with minimal tools and materials. However, just because it isn’t “hard” doesn’t mean it won’t be time consuming because it sometimes can be.

Many people will simply do a head swap out with a new body rather than fooling with replacing the arms. Assuming you don’t want to go that route and instead prefer to replace the arms then keep reading.

The most common method that people use to replace Barbie arms is the boiling water method. What you will want to do is get a bowl of water and bring it to a rolling boil using your stove or microwave. You can then dip the Barbie’s shoulder/arm into the water until the plastic has softened enough where the arm will come out of the socket easily.

Then you will simply take the replacement arm, put it in the boiling water as well and then push it back into the socket.

If too much time has elapsed while getting the arm out then you may have to reheat the water to get the plastic to become mold able enough on the replacement arm to where it will go back in.

It is also important to note that this method typically won’t work on older Barbies since the way the arms were connected to the torso was different than newer Barbies.

If you decide you want to just buy a new Barbie rather than replacing the arms then you can find those here.

Is It Possible To Replace Barbie Arms?

Barbie dolls are constructed with each plastic arm connected by a joint on either side of the body. These arms, while somewhat flexible and articulated, do not have shoulder joints and cannot be bent upwards.

Many children are not aware of this, and even those who do know that the doll cannot be handled a certain way may run into issues where the arm of the doll ends up breaking off or becoming damaged.

Thankfully, it is entirely possible to replace a Barbie’s arms (although it can be time consuming). You can do this a number of different ways, though for purists the method that is used may be a bit different than those who simply want a functioning toy.

Simple repairs such as gluing the arm back into place may not bring forth the most attractive outcome, but it will at least give you a whole Barbie once more. If your child seems to constantly be breaking their Barbie’s arms then glue might actually be the best bet as replacing the arms the “right” way over and over again will likely get old fast.

Below, I will cover some other techniques for replacing a Barbie’s arm assuming you don’t want to glue it or use the hot water technique mentioned above.

If the arm of your Barbie doll has been completely broken and unable to be reused for replacement, then you will most likely need to seek out a supplier that can give you a new doll arm.

Mattel, the makers of Barbie, actually have their own parts store where you can try to find specific parts for their toys. Here, you can attempt to search for replacement arms for your Barbie.

Should there be none in stock or none available you can contact Mattel’s customer service directly with your concern. Make sure to state that you are contacting them about a replacement part for your Barbie and then send in your support request.

Alternatively, you can attempt to find individuals who offer services where they either supply you with replacement parts or will repair the doll for you.

And if worse comes to worst you can always remove the arm of a similar Barbie doll and use that to replace the arm of the broken one. For vintage or discontinued Barbies this most likely is not an option, and you will have to explore other avenues for replacing your Barbie’s arm.

Replacing the Arm of Your Barbie Doll

While it is easy to simply glue the arm of your Barbie back into place you will lose any articulation that the doll previously had if you choose to do this. Below is an additional method which allows for the same level of articulation as a brand-new Barbie doll, with just a bit of effort.

Once you have a replacement arm prepared you can move on to putting the arm into your Barbie doll. For this method of replacement, you will need a mini grinder with accessory kit, a 4mm screw, and some pliers.

If the arm of your Barbie has only partially been broken and did not break at the shoulder joint as most Barbie’s do, you will need to remove the old arm before continuing, as this method replaces the entire arm of the Barbie doll.

Begin by drilling into the arm hole in the torso. This will make it much easier for you to remove the broken pieces of the arm that have been left within the body. Make sure to be very careful when performing this step, as mishandling of the grinder can cause injury or damage to the Barbie.

Once you have completely removed any leftover pieces within the torso, take your 4mm screw and slide it into the hole where the arm was previously attached. If it fits then you can move onto the next step.

Now you will need to use your grinder again. Use the cutting blade attachment for the grinder and carefully cut away the broken piece from the shoulder of the arm. In most cases, there will still be the piece that locks the arm into the torso still connected to the arm itself.

If this is not the case, then simply smooth out the inside of the shoulder so that the surface is as flat as possible. Make sure you do not grind away too much plastic, otherwise there will be a gap between the arm and torso once you replace the arm.

Next, take a 4mm drill bit and mark where the new hole will go. This will be attached to the head of the screw. After this you should carefully drill into the shoulder, stopping frequently to check that the hole is sized correctly and that you do not drill straight through the arm itself.

Take a grinding blade and round off the head of the screw once you have finished the previous step. The head of the 4mm screw is what will be attached to your Barbie arm itself.

Insert the screwhead right into the hole that you drilled out previously. You want the hole in the shoulder to be slightly smaller than the screwhead so that it fits tightly together.

Now you will need to measure the length of the screw relative to the body of the Barbie doll, cutting away the excess length of the screw with your grinding blade. A recommended length would be 25mm, as this will fit perfectly within the torso of most Barbies.

Simply screw the arm into place and you will get a nearly brand-new Barbie doll, complete with the same articulation and mobility that any other doll would have.

Replacing your Barbie doll’s arms is something that many people have wondered about through the years, and you are now equipped with the knowledge on how to replace a Barbie’s arm all by yourself!

Take this method and use it to your benefit, as you will be able to enjoy any Barbie doll as if it were as good as new in no time.