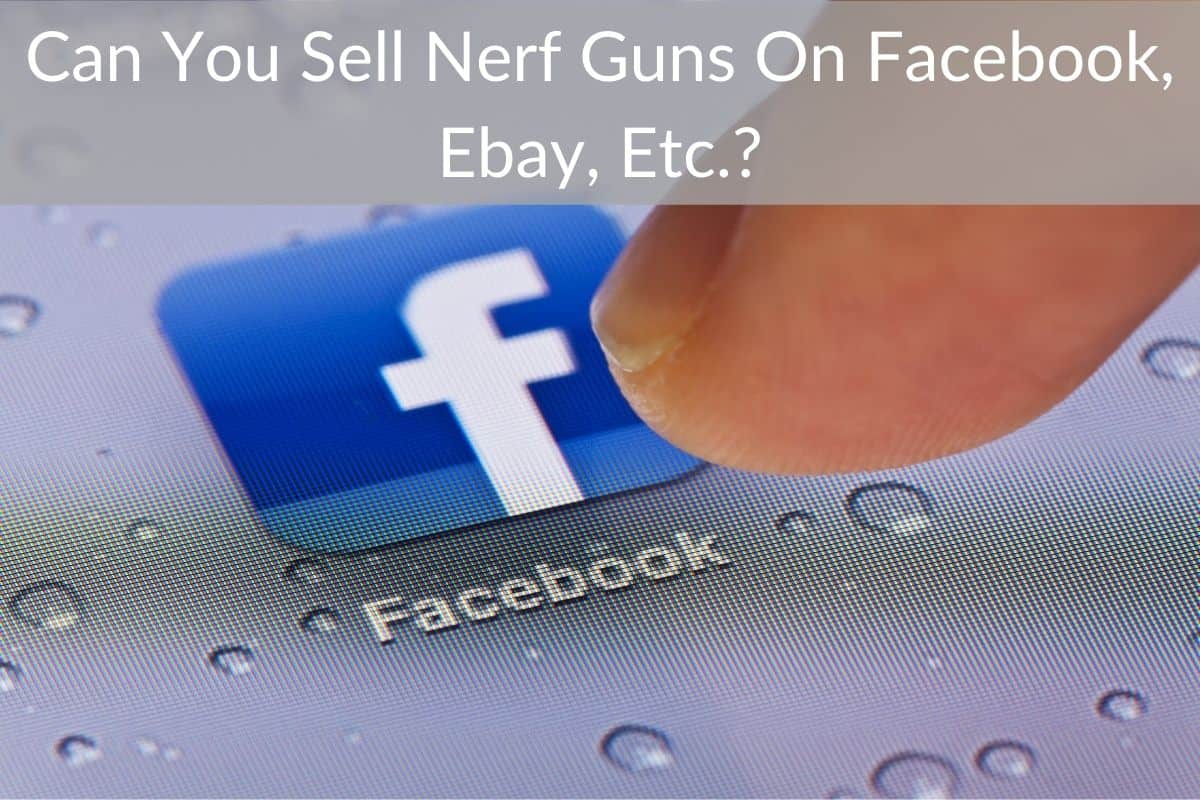 You have to admit, Nerf guns are pretty cool. From the Nerf Ultra blaster to the Super Soaker the fun never ends! But when you no longer want these dart toys and they seem to just be taking up space in a closet somewhere, you might consider selling them online.

If you have wondered if you are able to sell your old Nerf guns on Ebay or Facebook Marketplace, the good news is you can!

You can sell Nerf guns on Reddit, Facebook Marketplace, Facebook groups, Ebay, Offerup, Craigslist, and Amazon. Sometimes Facebook will remove for sale posts that have the word “gun” in them so if you have that issue just only use the word “Nerf” instead.

Nerf guns are fun for any age and they offer hours of playtime both indoors and outdoors. There is also a large variety of Nerf blasters to choose from. Most toy stores will sell Nerf guns but some of the more rare dart shooters will only be found online.

Selling your Nerf gun online doesn’t just put money in your pocket but gives someone else a chance to enjoy playing with the toy, too. It’s a great way to recycle the item instead of throwing it away.

It also may be just what the other person is looking for. Some are extremely passionate about their Nerf guns!

To see the most popular Nerf guns on the market today just click here.

How To Sell Nerf Guns On Ebay, Facebook, Etc.

When you are ready to part with your Nerf toy, there are many sites where you can post them for sale. It’s an easy way to sell them and make money and only takes a couple of minutes to do.

Posting a Nerf gun for sale online is easy. Just follow what the website says about selling your item, take a couple of pictures and voila-done! You will have to include information in your post about the condition so selling locally through Facebook Marketplace is a little easier.

For the easiest sell you will simply have to login tk your Facebook account, go to the Marketplace section and create a listing. Then you can sell it to people local to you or even offer shipping.

The next easiest place to sell would be Craigslist. An account is super easy to set up and selling is only local so no shipping is required. However there can be a lot of scammers on Craigslist so watch out for anyone who refuses to meet locally or tries to get you to ship it to them.

After those two local options the next easiest place to sell is Ebay and then Amazon. Both of these work relatively similarly however Amazon has specific rules about who can sell what items at different times of the year so be sure and check the rules for toys to see if you can currently sell your Nerf guns on there.

For instance, to sell something on Amazon go here. . Just sign up, post your item for sale and make money off of it!

Most of the time online sites will already have special groups for selling Nerf guns. Reddit has one called Nerf Exchange. Facebook has Nerf Marketplace and so on.

You can also find some unique blasters while selling your old unused ones.

When selling your Nerf gun online it’s important to remember that the sale of firearms and guns is not allowed on these sites. So when you post your blaster for sale, include that it is a toy because using the word “gun” may cause the listing to be taken down.

Unfortunately all of the scanning is done by robots so they have no way of telling the difference between a real one and a Nerf gun.

You can post it for sale as a blaster instead or simply just use the word “Nerf”.

How Much Do Nerf Guns Cost And Are They Worth Anything?

Rare and original Nerf guns get a lot of attention and can sell for high amounts. The most expensive Nerf gun was the N-Strike Longstrike CS-6 and it cost an average of $600. Another, the Nerf Max Force Manta was $425.

The website Luxatic states, “There are basic Nerf guns and there are heavily customized Nerf blasters, with the latter becoming more and more common these days, which makes them even more valuable as collectibles because of their uniqueness. The functionality and the play possibilities they open are two other factors that increase their price.”

For another list of the most expensive nerf guns you can visit Fatherly.

Nerf guns prices range anywhere from $20-$200 all depending on the type, condition, and if it’s been used. They are still worth something if they are older, original, and untampered with because this could mean that their value has increased.

So Nerf blasters are definitely written more if they:

You can sell them for about half the original price if used, but like I said before if they are rare and in excellent condition that selling price can jump up to a lot more.

On the site, Happy Gifts For Kids they go more into depth with how a collectible nerf gun is worth more money saying that

“The longevity and staying power of the brand mean that some old Nerf guns have become collectibles and that the most expensive Nerf guns are now worth a lot of money. And as far as their value is concerned, the newer models might be worth more, but older Nerf guns could still cost more for their rarity and demand.’

Is It Legal To Sell Modified Nerf Guns?

Modification is tampering or changing the blasters or darts in order to get greater range or rate of fire from your Nerf gun. Cosmetic changes are also a part of modifying.

This technique is explained further here.

It is absolutely legal to sell modified Nerf guns. It is not illegal unless you change them to use live firearm ammunition or explosives.

Painting over the identifying red/orange tip of the barrel is also a no,no because that colored part is recognizable as a toy but it isn’t considered to be illegal… just not very smart.

So if you keep the toy aspect without making it dangerous you are fine.

According to Chicago News, some people were adding dangerous items such as needles to their foam Nerf darts among other harmful mods on their blaster and this is a dangerous thing to do.

You may hurt someone and/or yourself.

Although Nerf has worked with those who modify their blasters they do not condone modification of their guns as it can be dangerous. In that same news article (linked above) it was said that a spokesperson for Hasbro stated: “Safety is of utmost concern to the company. Consumers should only use the foam darts designed for specific Nerf blasters and never modify the darts or the blasters.”

Be safe with your blasters!

Anyone can enjoy a good time with Nerf guns and that is why so many people sell them online. By selling them on online shops such as Facebook and Ebay, you can make extra money off of your unwanted blasters.

You can also give someone the perfect foam dart gun for their Nerf wars. Happy selling!