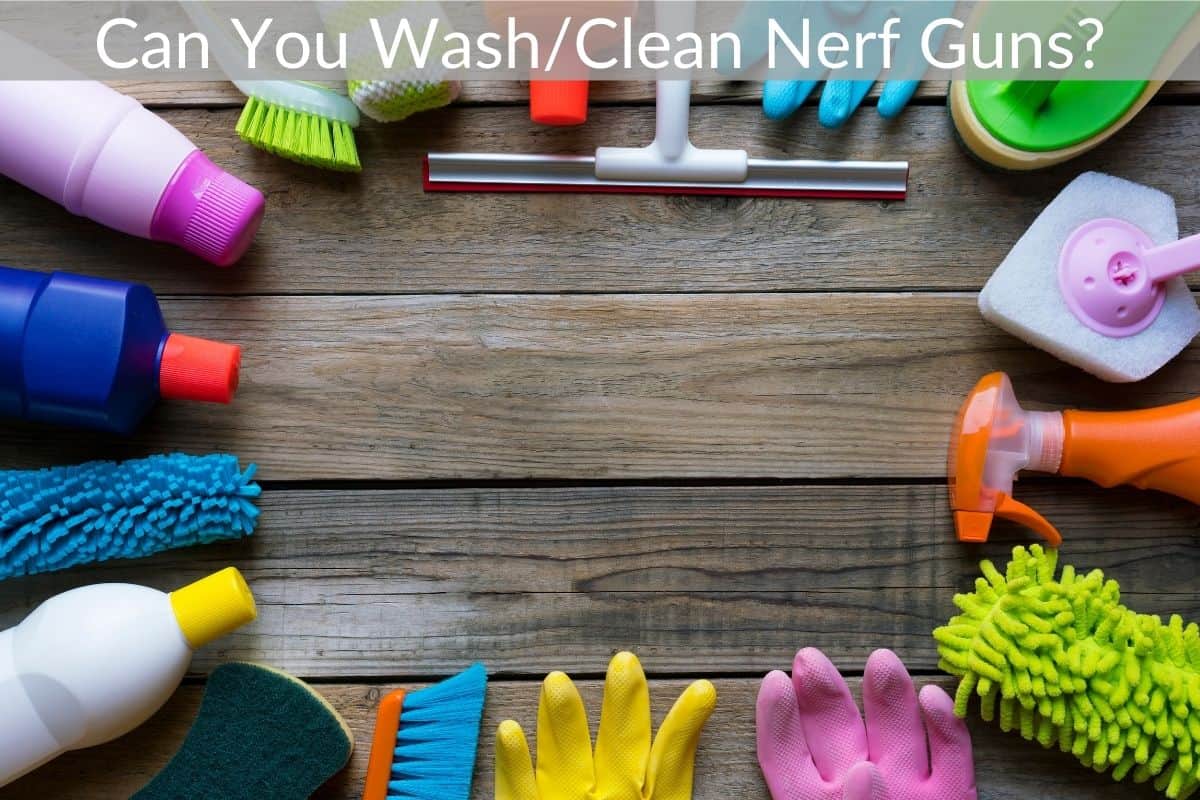 Nothing reminds me of my childhood more than Nerf guns! My oldest daughter wasn’t the biggest fan because her brother would ambush her with them, but my son was obsessed! They would spend hours shooting at each other both inside and outside.

I can’t even begin to tell you how much money I’ve spent on Nerf guns throughout the years…and don’t even get me started on replacing those tiny bullets that always seem to go missing. Even now that my lids are a bit older they are still not ready to get rid of their Nerf guns!

All my kids still get nostalgic from time to time and start a Nerf war that always seems to drag everyone in the house in!

Well I don’t know if you ever have this problem, but my kids get their Nerf guns filthy! If they are inside the only issue is the noise, but most of the time they decide to take the Nerf war outside.

Don’t ask me how, but they always end up getting them caked with mud and grass in every little nook and cranny.

Nerf guns can be cleaned, but not every method works. You should never completely submerge them in water but instead should just use soap and water to wipe them down.

I’ve tried many things over the years to clean their Nerf guns and have found some easy ways of getting the job done. Here are a few tips that have helped me along the way.

While you may be tempted to soak your child’s Nerf guns in diluted bleach water or spray it off with the hose, Nerf guns are not intended to get that wet.

A little water is OK and won’t damage anything, especially if it’s on the outside, but you want to avoid fully submerging your child’s Nerf gun in water.

Here are the top two ways I’ve found to clean your Nerf guns. (With either of these methods you can use a q-tip to get into the smaller areas if needed).

1. The easiest method is also the cheapest. The only thing you need for this is soap (Dawn works the best), water, and an old rag. Just simply wipe down the outside of the Nerf gun with a soapy rag and let it air dry or lay out in the sun.

2. This next method uses rubbing alcohol and is relatively easy also. It’s especially helpful for when sticky things inevitably wind up on your child’s Nerf gun. Just put some rubbing alcohol on a paper towel and give it a good scrub.

Of course you could also use things like baby wipes, disinfectant wipes, etc. to clean them but that is rarely needed and soap and water will do the trick most of the time.

Whether they accidently leave it out in the rain or purposely try to have a Nerf battle in the bathtub or pool, here’s what you need to know.

Nerf guns are not meant to get wet. If they are left wet for too long, the internal metal parts will begin to rust and then the Nerf blaster will stop working right.

It’s important to let your children know, especially the young ones, that they need to save the water for water guns. And if they are anything like my kids are, just assure them that the little foam darts will not indeed shoot under the water either.

If your child accidentally left their Nerf gun outside, bring it in as soon as possible. The longer it’s left out, the higher the chance of the internal springs and screws getting rusty or getting dirt mixed inside which would be a lot harder to clean.

If the Nerf gun has been forgotten for a few days you may have to disassemble it, clean it out, and then let it air dry for a couple hours or even overnight so you can get it entirely cleaned and dried out.

Submerging your Nerf gun should be avoided at all costs!

Why Is My Nerf Gun Not Working?

If your Nerf gun stopped working it could be that it’s something like a jammed dart which is easily fixed, but there could be something else wrong that takes a little more time to fix.

If your Nerf gun isn’t pulling back to load the dart, the catch might be broken.

The catch is an internal piece that catches the plunger when you cock the Nerf gun and then releases it when you pull the trigger. This causes a big rush of air that then propels the dart forward.

The catch is a small piece made of thin plastic, so it is very prone to wearing out after using it for a while. Once it’s broken, it has to be replaced for the Nerf gun to function properly again.

Another problem that could go wrong is with the catch spring which is a small part of the catching mechanism.

It gives the tension necessary for the catch to latch on to the plunger. If this is broken, the catch will not spring back into place after firing the gun.

If the spring is just out of place a little bit, you can easily put it back into position which will fix the problem. However if the spring is too stretched out from use or is broken you’ll have to replace the spring.

How Do You Unclog/Unjam A Nerf Gun?

Another frequent issue my kids have had with their Nerf guns was putting the wrong sized darts into the wrong Nerf gun which would inevitably cause it to clog or jam. This problem can also happen if the Nerf dart isn’t loaded properly.

So how can you fix this common issue?

The first step to fixing a jammed Nerf gun is to remove any accessories like barrels or clips and find where the bullet is lodged.Once you find the dart, there are a few ways to remove it depending on where it is.

If the dart is stuck in the orange clip, it’s really easy. All you need to do is remove the clip and reload the dart with the appropriate sized bullet and then it’s good to go.

If the dart is stuck inside the barrel, you can easily use tweezers to remove it. However if it’s too far back, you might need to disassemble the Nerf gun entirely.

As a last resort you can easily tear apart any Nerf bullet that has gotten itself jammed with no way out. Just get a pair of needle nose pliers and start ripping it apart.

As long as you aren’t tearing up the Nerf gun parts as well this is a simple way to remove a stuck Nerf dart.