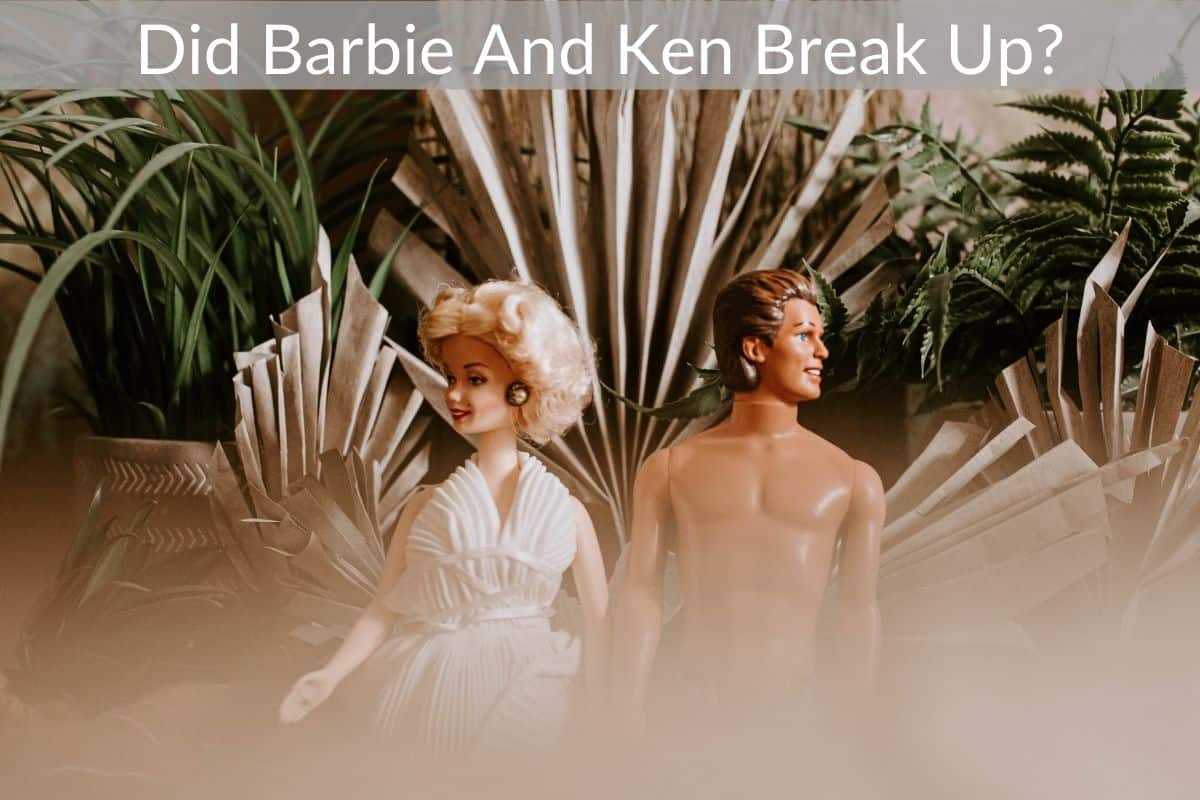 Barbie and Ken are one of the most iconic fictional couples of all time. Their relationship is at least half a century old, yet they can still be seen together in Barbie’s vlogs every week.

However, their relationship isn’t as perfect as the rest of the things in the Barbie universe.

Like all couples, Barbie and Ken have gone through a lot together. They have had their ups and downs despite living in the perfect plastic Barbie universe.

Barbie and Ken once broke up on Valentine’s Day in 2004. The breakup was made official on the same day through an announcement from the manufacturers of Barbie and Ken, Mattel Inc.

Although Barbie and Ken broke up in 2004 the breakup didn’t last very long and they found themselves back together just a few years later.

To see the most popular Barbie accessories just click here.

Why Did Barbie And Ken Break Up?

The details regarding Barbie and Ken’s breakup are unclear. In 2004, the couple had been together for about 45 years. However, some sources claim that Ken wasn’t as committed to Barbie as she thought he would be after their decades’ long relationship.

Barbie was ready to tie the knot that year and was trying on quite a few wedding gowns. On the other hand, Ken was overwhelmed.

As a member of the plastic universe, aka the Barbie universe, he didn’t expect things to change. He didn’t intend on breaking up with Barbie, but he wasn’t ready for a change in their relationship status either.

The difference between the individual needs of the couple led them to rethink and reevaluate their relationship. Barbie and Ken mutually decided it was time to spend some time away from each other to better understand what they wanted for themselves and their relationships.

The breakup taught Ken and all of Barbie’s fans a valuable lesson. It taught everyone that though things seem to stay the same in the Barbie universe, they can change.

Did Barbie And Ken Date Other People After Their Break Up?

Soon after their break up, Barbie was spotted with a makeover and hanging out with an Australian doll, DJ Blaine, in California. She also put her focus and her energy into running for presidential elections that year.

Barbie’s post-breakup actions proved to her fans all over the world that even if she’s just a plastic doll, she is indeed a girl. She tried her best to move on and find happiness outside of her relationships.

Ken, however, regretted his failure to commit to Barbie. He made public confessions of his love for Barbie on his Twitter account. His most famous tweets include him declaring, ‘Barbie, you are the only doll for me,’ and ‘Barbie, we may be plastic, but our love is real.’

He stayed true to his words. Ken did not date anyone but worked on improving himself for his only lady love.

Two years later, he got a complete makeover. The new and improved Ken did not fear commitment, was an even sweeter talker than before, had dyed his blonde hair black, and was more physically toned than before.

Another few years later, in 2010, Ken found himself starring in the famous movie franchise, Toy Story 3. He appeared in the film in a supporting role as himself.

How Did Barbie And Ken Get Back Together?

Barbie and Ken got back together in a very similar manner than they first fell in love.

Their love story had started at a commercial shoot.

Barbie had recently made a switch from being a fashion model to a fashion designer at the time. Ken was a designer too. He designed jewelry and accessories.

Both Barbie and Ken were present at the commercial shoot as styling collaborators and had fallen in love with each other at first sight.

The second time they fell in love, more like they realized their love for each other, happened on the set of Toy Story 3. Ken had taken up the role offered to him in the film, but he did not know that Barbie was offered a role too.

However, Barbie’s presence on the set of Toy Story 3 was not a surprise as she had already appeared in the Toy Story franchise before Ken did, making a cameo in Toy Story 2 as Tour Guide Barbie.

In the film, Ken asked Barbie to move in and live with him in his dream house. He also adds that he might be sounding crazy given that they had just met each other. Before he completes his sentence of what it feels like to meet Barbie, Barbie mentions that it feels like they’re made for each other.

The scriptwriters of Toy Story 3 should be given a little bit of credit since they reignited the love between the iconic couple. Their dialogues hit the plastic hearts of both dolls and melted them, making them realize that they were indeed made for each other.

The film’s shoot ended, and as expected by the fans, Mattel Inc. shortly released the statements of Barbie and Ken getting back together. The couple announced they’re together again after seven years of breakup on Valentine’s Day in 2011.

Mattel Inc. released new sets of Barbie and Ken dressed as bride and groom in August of the same year.

Barbie started vlogging shortly after, and Ken often makes an appearance in her vlogs. When Mattel Inc. decided to change Barbie’s body to enhance the brand’s inclusivity, Ken released a statement about always loving and supporting Barbie.

As per the last report on their relationship, the couple has been together and happy.

However, some acclaimed news sources other than Mattel Inc. claim that Barbie and Ken never really split up. According to these sources, Barbie and Ken’s breakup was nothing more than a PR stunt.

Barbie and Ken were made for each other, after all.