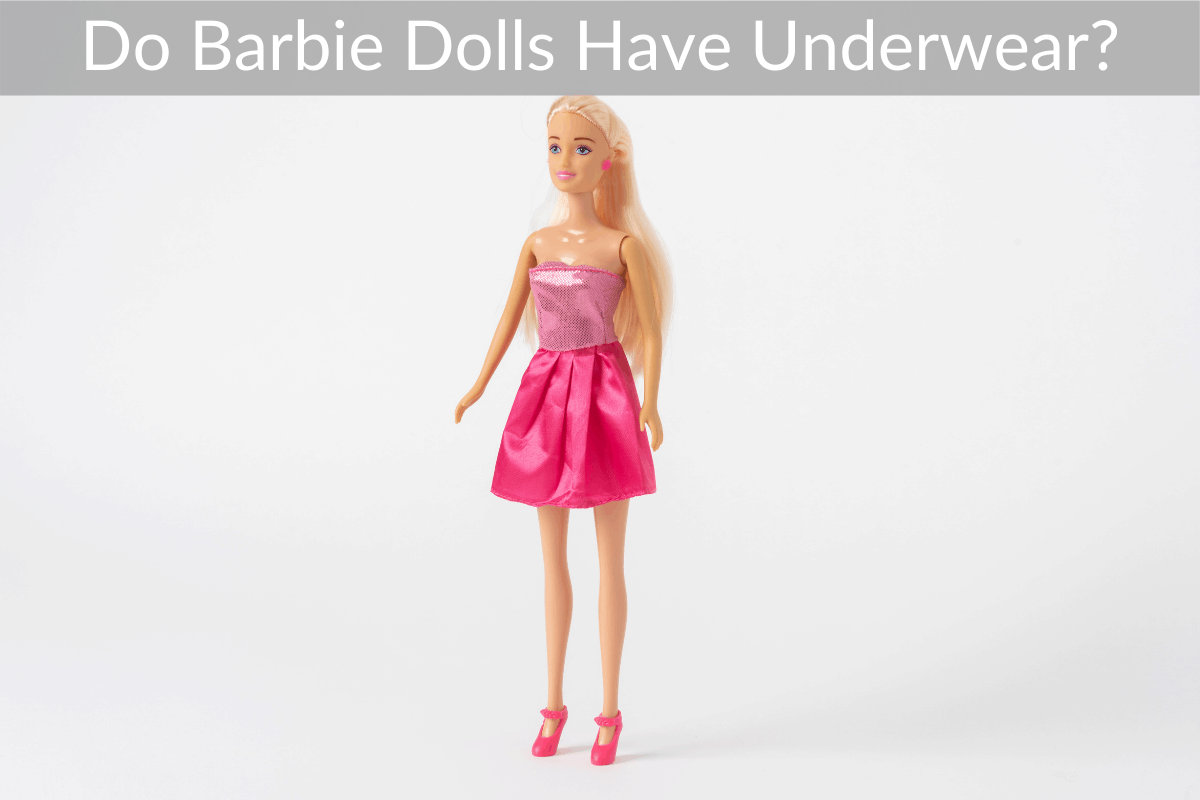 Many of us think that without all their fancy, designer clothes and accessories, Barbies are completely naked underneath (without anything else but their bare plastic flesh to see), but if you’ve tried removing the clothes of a Barbie doll and taking a closer look, you’ll quickly realize that modern day Barbies actually do wear underwear.

A Barbie’s private portions, particularly that from the waist to thighs, have a different texture that is designed to resemble underwear so even when a Barbie is being dressed/undressed they still have underwear on all of the time.

A Barbie’s underwear is a similar color to their skin tone, which is probably why you haven’t noticed it before.

This built-in “underwear”, however, wasn’t present in the Barbie dolls prior to 1997 so if you have older ones it might not have this feature. To help protect the innocence of children, the manufacturers decided to add it after that year.

If you want to purchase some undergarments for your Barbie dolls you can find many different options by clicking here.

When Did Barbie Dolls Get Underwear

The company behind Barbie dolls, Mattel Toy Co., added a textured pattern to the private areas of the Barbie doll in 1997 making them always have underwear on.

This was done to make the dolls more kid-friendly, as the purpose of the toy is to be played with by smaller children and Mattel wanted to be a bit more sensitive than they had been in the past.

If you look at your Barbie doll closely, you’ll notice that the area between the waist and thighs have a slightly different appearance compared to other parts of the body (assuming your Barbie’s are newer than 1997).

This is meant to resemble underwear and is present in almost all Barbie models apart from those older ones.

Although all Barbie dolls up to this day have this texturized bottom, Mattel Toy Co. decided to step it up a notch when they launched Teacher Barbie.

Teacher Barbie was meant to be a role model for kids so she wore a flared skirt ehich made the underwear texture visible and more noticeable.

As a fix, they created cloth underwear for the Teacher Barbie collection. Since then, they have continued to produce panties and undergarments for Barbie dolls (although they are often sold separately.

In toy stores around the world, people will be able to find clothes for their Barbie dolls, including underwear if they so choose.

Many crafters have also made it a habit to sew their own, either to use for their Barbie collections or to sell.

The ability of people to switch out their Barbie clothes and underwear, however, has been made more difficult because of the new generation of Barbies. Recently released collections now come in different heights and body structures which make it  more difficult for them to share clothes.

Purchasing a new generation Barbie doll would now mean that you only get the right size of clothes that come with Barbies, as there are no clothes with different size variations available on toy store shelves yet.

But you can always sew your own Barbie clothes with cloth, silk, and other fabrics. Some even use old clothes of theirs and repurpose the fabric to create clothes for their beloved dolls.

DIY Barbie Doll Underwear: How to Make Your Own Bottoms

Many Barbie collectors and enthusiasts would say that the best thing about playing with Barbie dolls is making the clothes for them.

True enough, this has become quite a hobby for people, as well as great practice for kids who want to be fashion designers or tailors in the future.

It has also helped breed creativity among children! If you want to make your own Barbie doll underwear, here are some DIY steps on how to do it.

First, you need to choose your fabric. The best type you can use is an elastic stretchable one so that the underwear you make will be able to fit different Barbie body types.

A thin, stretchable fabric is also ideal if you’re making underwear so that it doesn’t affect the fit of the tops and bottoms that you put on your Barbie over the underwear.

Step 2: Cut and glue your fabric.

Cut your fabric 11 centimeters long and 6 centimeters wide. Fold it in half lengthwise and then half again crosswise.

Make a small cut on the edge that translates to the center when opened. On the opposite side of the cut you made, make a vertical cut that divides the fabric into two elongated triangles.

Open up the fabric. It should look somewhat like a diamond with a round hole in the middle. Now, from that hole, make little cuts on each corner from the inside.

The cuts should make small flaps. Fold the flaps in and use glue to stick them in place. This is will make the cut cleaner.

Now take the shorter sides of the fabric that surround the hole. Fold them in and glue them in place without covering the hole.

Go down and make small folds on all sides of the fabric, sticking them in place with glue as you go along. Now, fold the fabric inside out and glue the thinnest edges together.

Step 3: Turn it inside out.

Let the glue dry. Then turn the fabric inside out. Put them on your Barbie and there you have it. You’ve created bottoms for your Barbie doll.

DIY Barbie Doll Underwear: How to Make Your Own Bra Top

If you want to create a bra top for your Barbie as well, here are the steps:

Step 1: Cut out and glue your fabric.

Open up the fabric and cut it in the middle, starting with the thinnest edge. Cut it only about half of the way. The fabric should look like one side of a pair of pants.

Fold the edges in slightly and then glue them in place just to make the cuts looks neater.

Step 2: Stick a strip of elastic at the back.

Take a strip of elastic band and place it in the middle of the wide-sided part of the fabric. Fold the remaining cloth up to cover the elastic and glue it in place.

Fold the two legs down and glue them to the elastic. Leave about a centimeter of space on the edges.

If you don’t have elastic, you can always use the same fabric as the rest of the top.

Stick Velcro on the centimeter-long spaces you left. Put them on your Barbie and stick the Velcro pieces together to keep the top in place.

And there you have it!

Contrary to popular belief, Barbies do wear underwear as this was changed in 1997. The underwear on current Barbies are textured areas from the waist to the thighs that you will find on your Barbie doll.

However, there are now Barbies that come with cloth panties as well. You can also buy underwear pieces in toy stores or you can make your own by simply following the instructions above.