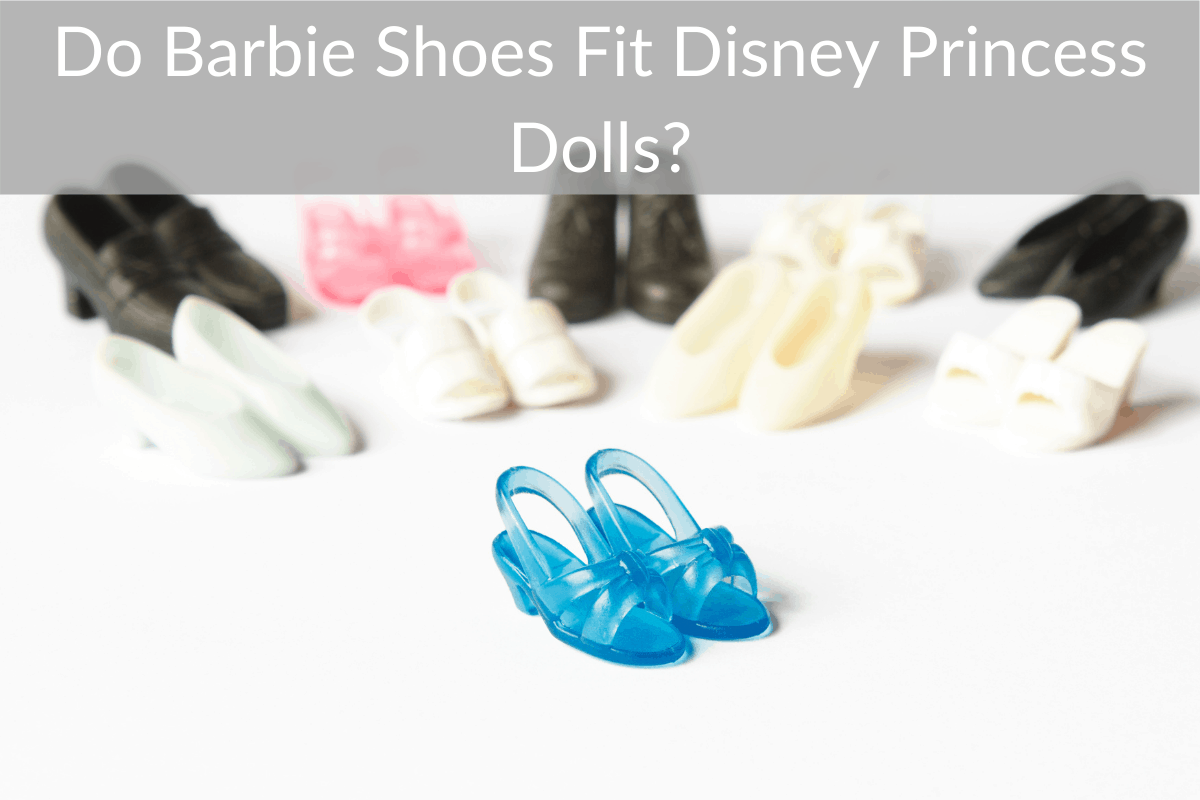 The popularity of Barbie dolls makes it hard to compete against them however, a lot of companies are still creating dolls similar to Barbies.

One company that has found good success despite Barbie’s dominance is Hasbro with their Disney Princess dolls.

Owing to the hype of Disney princesses, these dolls blew up in popularity and even Barbie collectors started buying them.

Due to the similarities between the two, many people have wondered if Disney Princess dolls fit Barbie collections and vice versa or not.

Will Barbie’s shoes work on these Disney Princess dolls that are made by Hasbro or are the sizes too different?

It’s honestly unfortunate that the Barbies and Disney Princess dolls shoes, clothes, etc. aren’t entirely interchangeable but at least some of the shoes and clothes can be used with the other dolls.

In the rest of this article I will go into more detail about the differences in sizes as well as how you can make your own DIY shoes for both doll brands.

To see some of the most popular Disney Princess Dolls currently available you can click here.

However, they, later on, sold the rights to Hasbro. This is actually a relief, considering that Disney producers did not want the princess dolls to look too similar to their Barbie counterparts.

Hasbro did a good job in recreating the looks of Disney princesses and making them virtually come to life to those who are playing with them.

They did not use the same molds as were used for Barbies, so the Disney princesses have unique facial features, body structures, and heights as well.

Due to the difference in mold structure, Disney princess dolls have bigger and wider feet compared to most Barbie models.

But some shoes can still be interchanged. Bigger sized shoes for bigger-sized Barbie dolls will easily fit the Disney Princess dolls.

For those who don’t mind that the shoes are not a perfect fit, interchanging their shoes can work. Although there will be instances when the heels of the Disney dolls will stick out.

Disney Princess dolls are also malleable, which means that their feet are not entirely a hard solid and can be slightly bent to fit smaller shoe sizes. But this comes with risking damage to the doll so it’s not something that I would recommend.

It’s worth noting that there are cloth-made shoes that are very flexible and can fit any doll similar to Barbie. These are probably the best option and will be able to fit Disney Princess dolls as well.

Others also opt to do a little DIY project to create shoes that can fit both dolls which I will discuss how you can do in the next section.

Because of the size differences between these two dolls, it can be hard to find shoes that are a perfect fit for both.

Toy store shelves don’t usually carry universal shoes for different types of dolls as it’s always either they are designed for Barbies or for Disney Princess dolls.

But this is a great opportunity for crafty doll lovers to shine. There are people who create one-size-fits-all shoes that can fit both dolls!

So if you want to find one, look for local DIY crafters or on places like Etsy.

Or you can even make your own!

Find your cloth and trace a pattern

Shoes made of cloth are guaranteed to fit any Barbie or Disney Princess doll. These are more flexible and adjustable compared to the harder plastic ones.

A good cloth to use is felt or foam. You can also work with other materials such as leather.

The first thing that you will need to do is find the color/pattern of cloth that you want for your doll.

Next, you will want to get the doll with the biggest feet.

If you’re comparing between your Barbie and Disney Princess doll, the latter will more likely have wider and bigger feet.

Put the foot on top of the cloth and trace around it, making sure to put a little allowance on the sides to make it easy to put the doll’s foot inside of it.

Cut along the lines of the pattern that you drew. Make three more of these with an identical shape and size. Now, you have the base of your shoes.

Cut a ribbon and attach a rubber sole

Now to make the strap of your sandals, take a thin ribbon that’s about 1 to 2 centimeters in width. Cut 2 pieces of 3 to 4-centimeter long strips.

Next. you will need to get a small diameter rubber band. The best ones are hair bands in your preferred color. Wrap the rubber band around the center of the ribbon and insert one side into the other to attach them.

You’ll need to do this twice to create two different pieces.

Connect them to the sole

Take the base that you cut out earlier and align the strap with the sole. The rubber band is where you will insert the foot of your Barbie/Princess doll, so it should be at the bottom.

Position the strap about ¼ inch below the sole. Then take a glue gun and neatly glue the two sides of the ribbon on the back of the sole.

Attach another ribbon for the heel

Cut out two new pieces of ribbon. You can use the same color as you did previously or opt for a new color to spice up your design. The ribbons should be a centimeter shorter than the previous ones.

Insert the strip into the rubber band and create a loop. Holding the two ends, bring it to the back of the sole and attach it in place with your glue gun.

Glue on the bottom of your sole

To make the shoes look nice and neat, glue another piece of the pattern to the bottom of your shoes. This should cover the ribbons that you glued underneath.

If you want to add a little bit more design, you can glue a gem or bead on the front and center of your shoes.

And you’re all set! Now you just need to repeat the process to create the other shoe.

Barbies and Disney Princess dolls share a lot of similarities — but also have quite a handful of differences in terms of structure and sizes.

Disney Princess dolls have slightly bigger feet, so standard or small-sized Barbie shoes may not be able to fit them whereas larger Barbie shoes will.

Nevertheless, you can always undertake a DIY project as mentioned above to create shoes that are the perfect size for both your Barbie and Disney Princess doll.