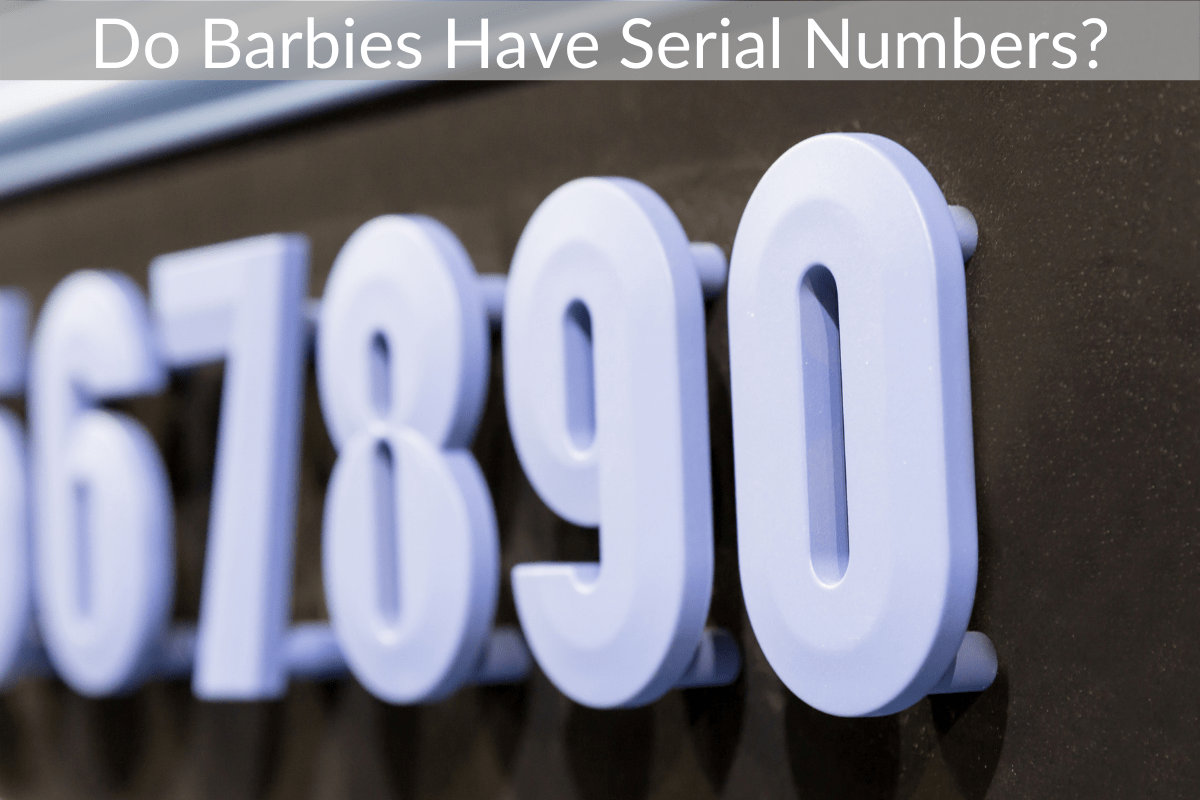 Barbies have been around for quite a long time and there are many collectors and other individuals who may be more than a bit interested in identifying exactly what type of Barbie they own.

Perhaps you are one of these people.

One of the first things that these people check for is a serial number on their Barbie since this is what many other items and toys tend to have marked upon their surface in one form or another.

Since most toys/collectibles have serial numbers then many people wonder if Barbies do as well.

Unfortunately, Barbie dolls do not have serial numbers on their bodies at all. However, each specific Barbie will often have its own distinguishing features that collectors will use to know exactly which model they have.

Although Barbies do not have serial numbers, they do showcase other markings and forms of identification which are quite interesting although this is more difficult for beginning collectors than serial numbers would be.

Throughout this article, I will be covering these various types of identification to help assist you in identifying your own Barbie doll or help you figure out which model you are currently looking at.

To see the most popular Barbies that are on the market just click here.

Do Barbies Have Serial Numbers?

Barbies do not have their own specific serial numbers. There is no solid reason given for why this is so, but one may assume it is because of the millions of Barbie dolls that are manufactured and sold every single year and the additional cost to add serial numbers onto the molds just isn’t worthwhile for Mattel.

Even though Barbie dolls do not have their own serial numbers they do have multiple other distinguishing features and markings which collectors will use to identify what the specific Barbie doll may be, when it was made, and other important information.

It may seem like a confusing and difficult thing to deal with, but thankfully using these other markings present on the Barbie makes it relatively simple and easy to figure out what your doll is, when it was made, as well as even where it was made.

For whatever reason you may wish to identify your Barbie doll, you do not need to give up hope. Even without a serial number you can take a look at these distinguishing features and use them to your advantage to help you identifying your Barbie.

Identifying the Barbie doll that you have and are trying to learn more about it can be a pretty big task, and this is made quite a bit harder due to the fact that there is no serial number anywhere on the Barbie dolls. Instead, there are features and markings that you can try to find which can give you a better idea of when it was made and where your doll came from.

Following are some of the things that you can look at in order to identify your Barbie doll.

The various markings found on your Barbie doll make it relatively easy to identify. You can find markings on the feet or right buttocks of the doll, and these are generally quite easy to see. There are also markings on the back of the head of the doll, though these may be a bit more difficult to spot due to the hair of the doll.

You may be able to spot some markings on the stomach of your Barbie doll, though these tend to oftentimes be the mold number of the doll rather than the year in which it was manufactured.

You can also identify your Barbie due to how tall they are. Depending on the year in which your doll was manufactured, the doll may have a differing height from previous or following years. For example, the Ken doll from 1962 is just a tad taller than the one from the following year’s doll.

You may also check the knob of the neck of your doll. While it is a bit of a more arduous process getting the head of your Barbie off without damaging it, you may be able to tell the year in which your Barbie doll was released based on the structure and shape of the neck knob.

The hands of Barbie dolls have an interesting past, and they are also great for identifying your doll. The earliest Barbies had hand molds that sported divided fingers. This makes them very unique and distinguishable from later models.

Around the year 1963, Mattel changed the way Barbie doll hands were molded. They no longer had individually separated fingers, though they still did sport a few fingers set apart from the rest of the hand. These became known as “Francie” hands.

Dolls that were manufactured in Mexico have very unique and distinctive hand molds which are very long and slender and feature fingers that are not divided at all. These are referred to as “Mexico” hands.

The eyes of your Barbie can also help in identifying it. Depending on the way the pupils of the doll are painted on and the color of the eyes themselves and the eyeliner are all great identifiers you can check for.

As previously mentioned, Barbie dolls tend to have markings on their feet that help to identify them. Aside from this, you can check for holes in the feet of your doll. The very earliest Barbie dolls had these holes as they were made to fit onto a stand.

Some other dolls have the “Made in Japan” marking on their feet, giving you a very clear indication of where your doll was manufactured.

The skin tone of your doll serves as a great identifier. Skipper, for example, has not seen many changes through the years ever since she was released back in 1964. However, in her 1970 reissue, the doll had a notably pinker skin tone than previous models.

Some dolls, such as the Japanese version of the American Girl (side part) have a different skin tone than their American version counterparts. This not only is a good way to identify your doll, but some skin tones are more valuable than others.

The color or style of hair of your Barbie doll can also be quite helpful in identifying it. Not only that, but different types of hair on your Barbie can end up increasing its overall value.

Color magic hair, the rare platinum or light brown, or other various rare hair colors can assist in identifying your doll. The style of hair is also a great indicator of when your doll was produced.

The earliest Barbie dolls were crafted in Japan. These lasted up until 1972. After this, dolls were made in either Hong Kong or Taiwan, and some were made in Korea. Dolls between 1968 and 1990 also had the chance of being manufactured in Mexico.

Reproduction dolls made before the 2000s tended to be manufactured in China, the Philippines, Indonesia, or Malaysia.

Even if Barbie dolls do not have their own serial numbers you can use this helpful information (mentioned above) to identify when and where your doll was made.

Figuring out the information about your Barbie doll is great if you are a collector, but it can also help to identify whether or not your doll carries a high value and will help you know whether it’s valuable as a collectible or only valuable as a keepsake.