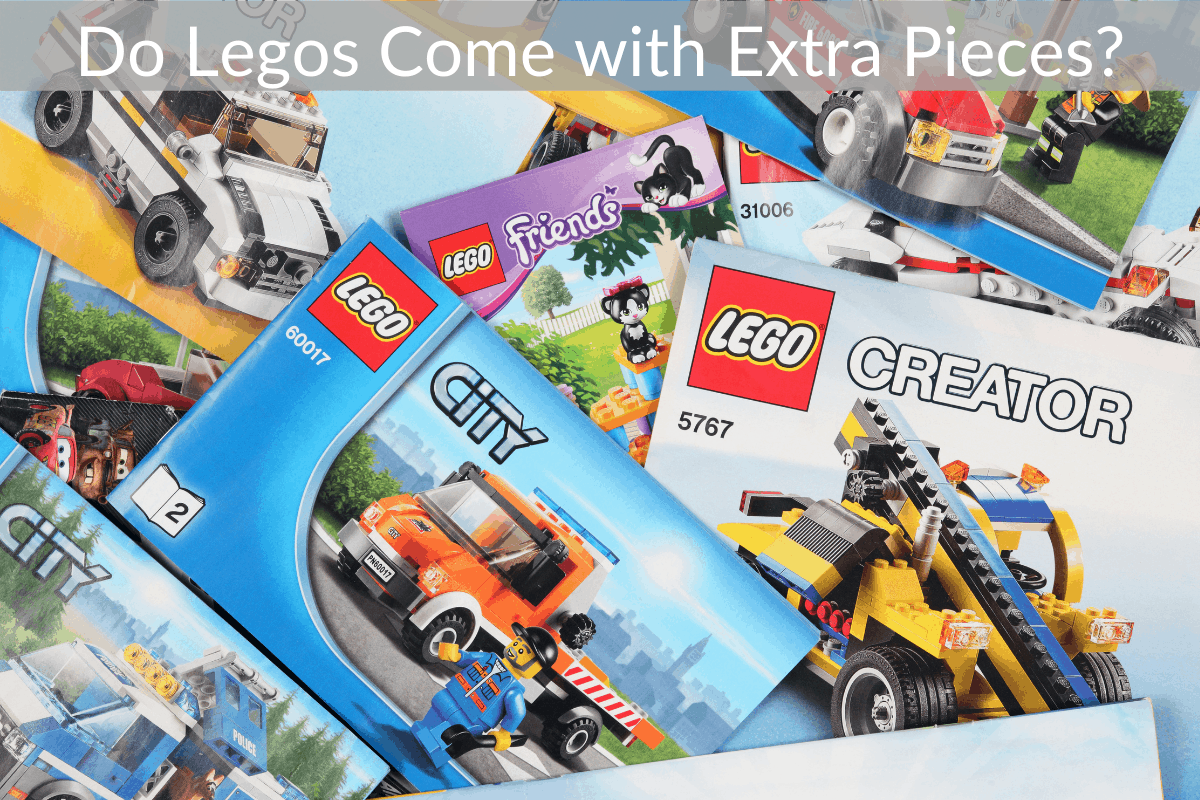 Legos are a great toy for making creative structures and virtually any shape. However, every time a Lego lover buys a set, they will sometimes notice a few extra pieces once the set is complete.

Does that mean that they missed where those pieces go? Are they extras?

Lego sets will often have extra pieces in them since Lego uses weight to determine if all the right pieces have been added. Since the smallest pieces have a weight that is virtually nothing, Lego will often put a few extra of those in the package.

They do this because they would rather their customers have a couple of extra small pieces (that cost them less than a penny) than to have the set be short and have to send out some additional pieces (at a significantly higher cost).

In this article, I will explain all about these mysterious extra pieces, the different reasons behind them (besides the ones mentioned above), and how to make the best use of them.

To see some of the most popular Lego sets just click here.

So without further ado let’s dive into it.

Lego claims that when it comes to packing the smallest pieces, they are not 100% confident in how many are in a specific bag and getting it accurate all of the time.

Most Lego components are loaded into little plastic baggies, and this is done automatically by the weight of the Lego pieces. However, the smallest pieces are complicated to weigh and require more precision and accuracy than most scales can offer.z

It is always easy to discern if a rather big piece is missing but with small ones, it is incredibly difficult to tell. Therefore, Lego has proposed a solution to this dilemma.

The company’s remedy is that for the majority of elements that are lighter than a specific threshold, they will add one extra piece of that category per small baggie. In most cases, many tiny extra bricks are added. This leaves you with some additional pieces when you buy a set.

Putting in extra pieces of the various small Legos means that the set is still complete even if one of those tiny pieces went missing, or if it was crushed, while the bag was being sealed.

This lessens the need for buyers to get in touch with Lego regarding any missing pieces as they can still finish the model even if a little piece was lost or damaged (since there were extras).

Other Reasons for Extra Lego Pieces

Aside from the weight aspect, there are other reasons for the inclusion of extra pieces in most sets. Lego sometimes adds extra accessories like antennas in the set as such delicate pieces are prone to breakage and are easy to lose. They often do this with different projectile elements, too.

Manufacturing is yet another reason for including extra pieces.

Specific kinds of train wheels are manufactured jointly. For many steam trains, Lego utilizes wheels that are produced in groups of three from a similar mold.

Nonetheless, not all trains employ these molds. Limited editions like the holiday train set only has two flanged driver wheels and skipped on using the blind wheels yet the set still included an extra blind driver wheel.

This is because Lego failed to utilize the flanged wheel in the train set without incorporating the blind one.

Many sets come with extra black pegs, as they are extremely lightweight. The layout of the black peg has become even thinner over the years and thereby lighter.

In many Technic sets, particularly those split up into numbered stages, there will often be an additional piece of every small type in the small pieces bag in all of the large stage bags.

Lastly, Lego also adds extra pieces as a treat for their customers to make their experience even more elaborate and fun and to keep from disappointing them.

There are some sets where no extra pieces are included in the set at all. This is the case with the Lego Juniors and Duplos sets. Their design and configuration have larger pieces that allow for proper weighing so the company does not add extra pieces in these sets.

Fun Ways To Use The Extra Lego Pieces

When people find extra pieces in their Lego set, many cannot figure how to utilize them and either decide to throw them away or find some storage space for them.

However, there are many ways you can use those extra pieces and make amazing things as well.

Below are just a few things that you can try to make with the extra Lego pieces from your sets.

It is always fun to try some creative home decor ideas. A great way to utilize the tiny extra pieces is to make a photo frame.

Grab a glue gun and your extra Lego bricks.

You can paste them on either a frame or cardboard if you wish to make your frame from scratch. Lego bricks have a basic plastic back that enables the photo to slide into the “frame” quite easily as well.

A rather fascinating way to use your extra Lego pieces is by creating a Lego lamp. If you have an old lamp with a broken shade or you do not like its design, you can use it as a base for a Lego lamp.

Take the extra pieces and build a covering around the base and then use one electricity source for the bulb and voila!

You now have a beautiful and functioning Lego lamp.

You can always build a stand for your smartphone by taking the pieces and firmly gluing them together in a rectangular form according to your phone’s size.

Be sure and leave a hollow space in the middle for putting your phone in. Moreover, you can browse stand design ideas, as there are different styles on Pinterest/ the internet that people have created.

You can make a unique and eye-catching keychain by just threading it through some Lego pieces that have holes or you can drill a little hole into a Lego piece, whatever you think works better.

You can even pair it up with a basic Lego board using bricks and mount it on your wall to work as a key holder. This way you will never lose your keys and have some fancy decoration pieces, too.

A well known trait of Legos is that you can join them and build things in any way you want. Another creative idea is to build a colorful and vibrant desk organizer.

You can make as many sections as you like and this construction will not break or knockdown like flimsy plastic ones.

For extra pieces, Lego also suggests donating them to your local charity so even if you do not want the extra pieces, someone else can share the joy of playing with Legos.

Normally it’s better to save all the extra pieces for a while until you get a decent amount before donating them as most places won’t know what to do with a single Lego piece that was extra.

In the world of Legos, getting extra pieces with your set has logical reasoning behind it while also making Legos extra fun.

I hope this article helped you in understanding the mechanics behind the extra pieces and you can always try making the things suggested or donating them if you don’t want to use them at all.