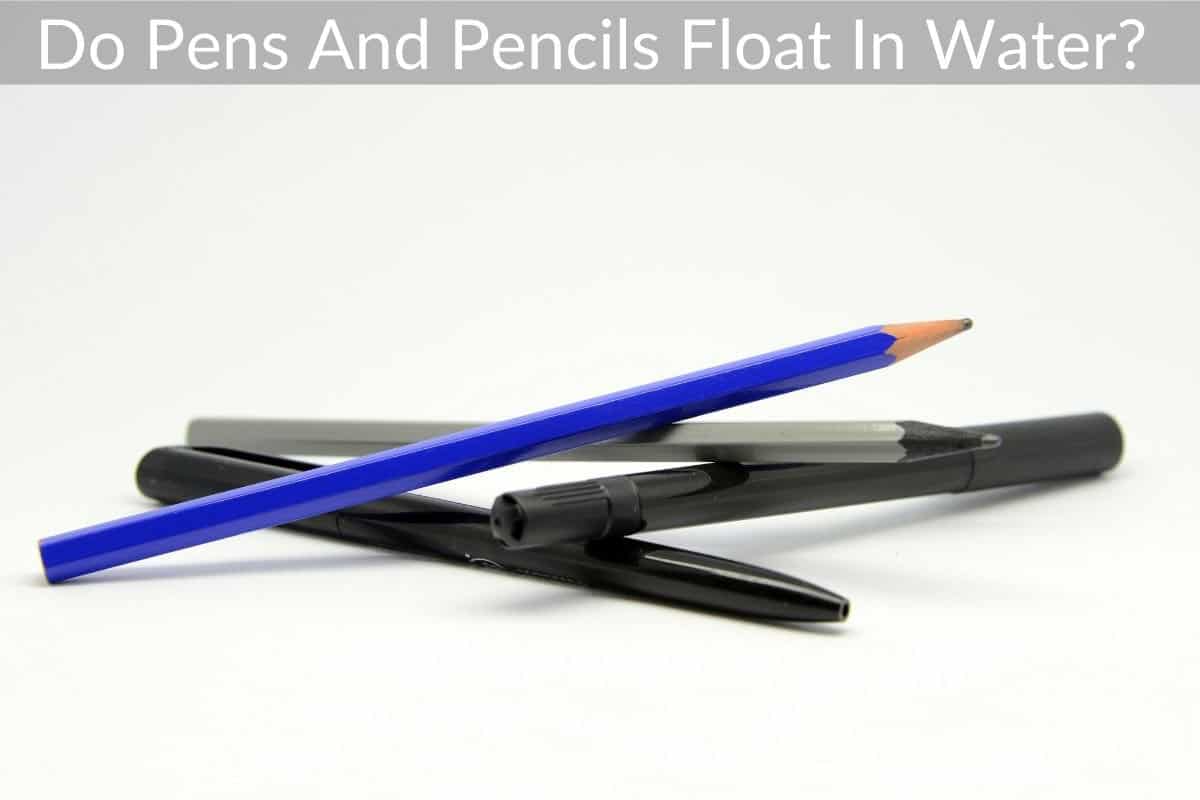 Are you searching for a fun experiment for your kids to try at home? A fun science experiment where you will have everything that you need already on hand would be to see if pens or pencils float on water.

Then you could always ask your kids to explain why they think they do or don’t. All you need for this experiment is a sink or bowl of water, pens, and pencils.

You could even try other objects like crayons and markers to see if they will sink or float.

Most pens will sink in water, while most pencils will float. Pencils float because they are made of wood which is naturally buoyant while pens are often too heavy/dense so they sink.

If you are doing an experiment with your kids or were simply curious about pens and pencils sinking then you should keep reading. I will go into more detail about pencil, crayons and other objects floating in the rest of this article.

To see the most popular pencils and pens just click here.

Why Do Pencils Float In Water?

You have completed your experiment with your kids and now they want you to explain to them why the pencils floated in the water. The answer is pretty simple.

A pencil floats on the water because it is lighter than the amount of water that it displaced. If an item is light enough for its size then it will float.

Density plays a large part in whether or not an object will float in water. The tighter the molecules are packed into an object the denser it will be. If an object does not have a lot of tightly packed molecules, then it will probably float as the molecules in water will be densely packed together.

A hollow object will float because it is lighter than the water. The same thing is true with your pencil.

That pencil is lighter than the water that you are placing it into so it will float. A pen tends to be heavier which is why it will sink.

Do Crayons Float In Water?

Now that you have tried to float a pen and a pencil you might want to try other objects to see what they will do when placed into a bowl of water. Crayons are easily available in a household with children, and oftentimes in houses that don’t have any kids living there, so why not see if it will float or sink.

Crayons can be a little trickier to decide on. They will appear to float at first but if you give them a little nudge just below the surface of the water some of them will sink.

Crayons are made of wax which typically floats in water, which is how they are able to make floating candles. Wax is made up of hydrogen and carbon while water is composed of hydrogen and oxygen.

The atoms in oxygen are heavier than the atoms in carbon which means that water is denser than wax and that is why wax will float in water. If wax floats in water why will some crayons sink?

Crayons are more than just wax. They also contain pigment in order to give them the color that they need for you to create with them. Some pigments are heavier than water so they will sink.

The more pigmentation a crayon has the denser it is, causing it to sink.

What Objects Will Float?

Studying density will lead you to wonder what objects can you float on water? The objects that do float will have a lighter density than objects that will sink. You can have a large item but the weight of that item is spread out so it will float.

Think about when you do a backstroke at the local swimming pool during those scorching summer days, in order to make yourself float you spread your arms and legs out. But if you pull all of your limbs closer to your body you will sink.

What changed to make you sink, you weigh the same amount in both scenarios? In the first scenario where you are floating your weight is dispersed throughout your extended limbs, in the second all of your weight is concentrated together.

Any object that has a lighter density of the water you are placing it on will float. Pencils will float in water, as well as wax. Paperclips will even float in their original shape.

If you take a paperclip and twist it into a different, more compact shape it might not float. Remember that the shape of an object also decides if that object will sink or float.

Even though the aluminum foil is all the same material and you added nothing to it, it will give you different results because of the shape the foil was placed in. The more compact you made the foil, the denser it became.

So, while it still weighed the same amount, the weight of that aluminum foil was dispersed differently.

This is a fun experiment that you can try at home with your kids, or even just by yourself if you’re curious to see what will and won’t float. Gather up different types of objects and head to the kitchen sink for a little science fun.