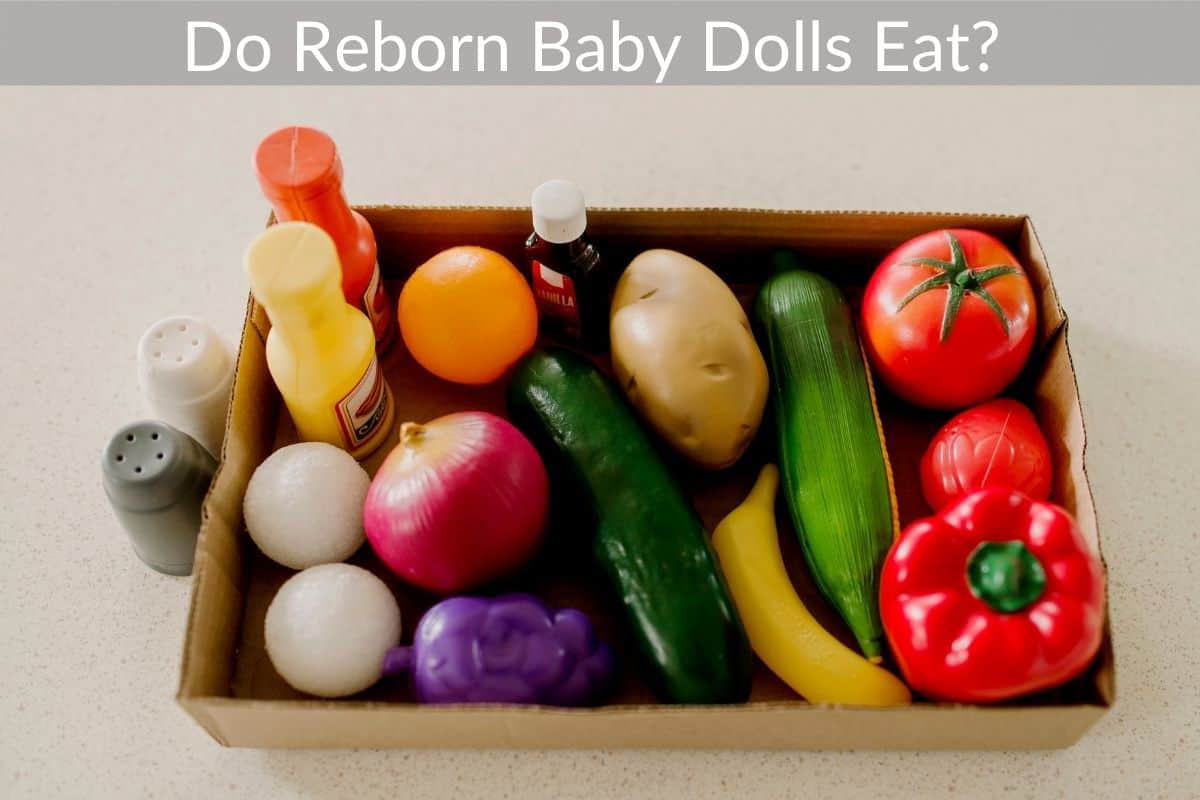 A reborn baby doll is a doll that has the appearance of a real baby. Reborn babies are handcrafted by artists, although some companies make them as well.

These dolls are made to look and feel like a newborn baby and they can range in price from 50 dollars up to well over two thousand!

While many collectors love these dolls, they have also been used for therapeutic purposes. A woman who was fighting cancer obtained a Reborn baby and said that it helped her to deal with the emotional stress that she was going through.

Reborn dolls have even been used in nursing homes so to some people they are more than just a toy.

In the video the little girl, who appeared to be around six years old explained that her babies are still hungry even after they finish their bottles so they were going to get solid food for the first time.

The mom and little girl then went into the kitchen and made a meal for their babies.

They chopped up carrots and pumpkin then tossed that into a pot and boiled it. Once it was all cooked, they drained it and pureed it. Turning it into baby food, one that the little girl had really enjoyed when she was a baby.

They got out the bowls and baby spoons, placed bibs on the babies, then proceeded to feed them. In the video you can see that the babies are not actually eating, they use editing to show a full spoon then an empty one.

Can you actually feed Reborn dolls?

Reborn babies are dolls and they can not actually eat food however some of them are designed to where you can give them a bottle or food and they will “drink” or “eat” it.  These dolls are typically really hard to clean as the moisture from the liquids can cause mold so these type of Reborn dolls are pretty rare.

If your Reborn doll isn’t specifically designed to where you can feed them or give them milk then all you will really be doing is making a mess.

Any liquid or food that you actually do get inside of your doll’s mouth will eventually turn to mold. Not to mention you would be ruining a very expensive doll.

To see some of the most popular Reborn dolls on the market just click here.

How Do You Feed A Reborn Baby?

Reborn babies are so lifelike that they have even been mistaken for real babies. You can even get heartbeat mechanisms to put into your Reborn doll.

A police officer once broke the window out of a car when he saw a Reborn doll inside, which he thought was a critically ill newborn that had been left in a hot car alone.

That’s how lifelike these dolls can be!

Many people treat their Reborns as if they were their children. They bathe them, change their diapers, take them on walks, car rides, and feed them.

Since a Reborn baby is a doll, how do you feed one?

To feed a Reborn baby you will need fake food or will need to buy a Reborn doll that is designed to handle food and liquids and expel it from the doll’s body.

When I was little there were dolls in the stores that came with white bottles which turned clear when you held them upside down, giving it the appearance that your doll was drinking the milk.

You can easily make some fake milk for your Reborn doll with some lotion and water.

Simply place some water into your baby bottle and add a few teaspoons of lotion. Place the lid on the bottle and shake until it is mixed together. This will give the appearance of milk. Just be sure to seal the nipple of the baby bottle so that you won’t accidentally get any of your Reborn “baby food” into the doll.

You can also make fake baby food. You’ll need lotion, food coloring, vanilla essence, and chalk dust. You will also need to get a clean plastic container to mix it all in.

Add a few tablespoons of lotion into the container with one or two drops of the food coloring of your choice. After you color your lotion add a little chalk dust to give it some texture.

You can then add a drop of vanilla essence if you want then place your Reborn food into a jar.

What if you don’t want to make food or milk for your Reborn baby?

You can purchase baby bottles of disappearing milk or juice online.

What Is The Point Of A Reborn Doll?

These realistic baby dolls are more than just a toy for a lot of people.

There are many different reasons a person might want to have a Reborn doll and different ways that they might find them useful.

Some people collect Reborn dolls just as they would collect porcelain dolls or Barbie dolls. Other people will use Reborn dolls to cope with the stress or anxiety that they feel by not being able to have children of their own.

Some couples have used them to help with their grieving process when they have experienced miscarriages and some grieving parents have had dolls created to look like the child that they have lost.

Being able to hold a baby that looks like the one that they no longer have helped them to deal with their grief.

These dolls can also be used by women who are pregnant and are experiencing anxiety about caring for a newborn. Expecting parents can get plenty of hands-on time before their child arrives by caring for these dolls.

By using a Reborn doll, they can learn how to bathe their future child. They can practice getting it dressed, rocking it to sleep, feeding it, and so much more. This will help them to feel more confident in their parenting abilities and relieve some of the anxiety that they are feeling during pregnancy.

Reborn babies have also been given to people with Alzheimers, dementia, and depression. These dolls have a therapeutic effect on people with these disorders, giving them something to care for can help them.

In fact, some psychology courses even recommend that dementia and Alzheimer’s patients play with these dolls.

Of course, some people just like to have reborn dolls because it is fun. They can take care of them just as they would a real baby but they don’t have to worry about constantly being there to care for their child.

No need to find a babysitter so you can go out with your friends. They can sleep through the night without worry if the baby would wake them.

They can be nice gifts for a child just to play with or to help them to learn how to handle a baby if that child will soon be getting a little sibling.

Reborn babies are so much more than a collectable toy. These silicone dolls bring joy to all those that own them.