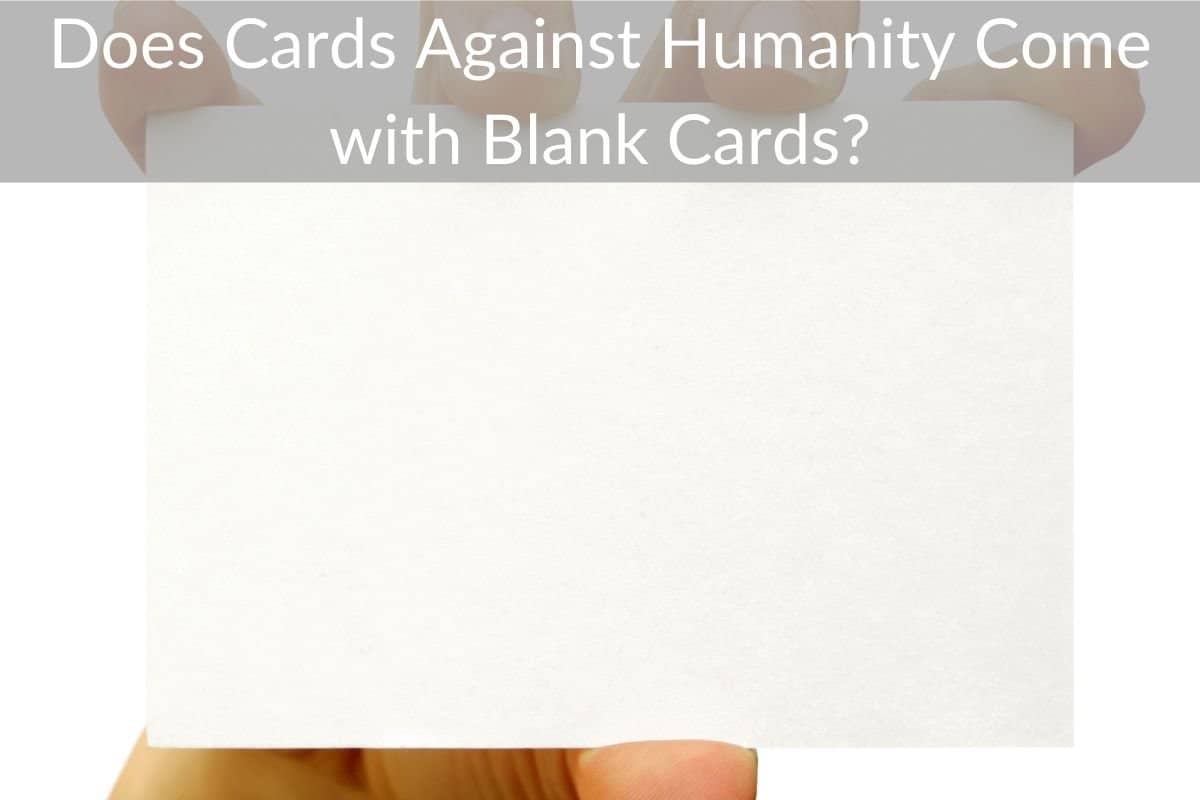 The game that seems to have swept the internet by storm and left hilarious situations in card format is one that many people want to play.

This game works really well in large groups of people who like to have fun and are not uptight about things.

Sometimes groups of friends and family have plenty of inside jokes that would play well with the game Cards Against Humanity, and they may want to incorporate their own jokes into the game but are there blank cards in CAH?

The inside jokes will have to wait until you can purchase one of the expansion packs that includes a way for you to make your own cards. The game does have plenty of cards that will keep the party rolling with a myriad of situations occurring which makes the game playable for many different game nights.

If you constantly play with the same people, you may find that your group gets bored of the same cards if they have good memories or have certain expectations about results so getting this expansion pack is a good idea.

To see the most popular Cards Against Humanity expansion packs just click here.

Is Cards Against Humanity Kid Friendly?

Cards Against Humanity has an age rating of 17 or older for a reason. These cards have profanity and overt sexual themes that many may find embarrassing, crude, or vulgar.

Cards Against Humanity is not kid friendly; however, there is a family version available that can be used when playing with younger people.

The family version of Cards Against Humanity is actually pretty tame and can easily be played with kids as young as 10.

I played the game with several of my friends while in college and we laughed hysterically and loudly the whole time.

The cards lack the profanity, but still maintain some of the sexual themes if played to that expectation. The cards themselves have a lot of bathroom humor and risqué situations as well.

Just be careful when you play the game with children. You may want to filter out some cards or lay some ground rules about what is acceptable or not.

I loved the game, but I also played it with a group of friends that know how to roll with the punches and don’t automatically assume that you are a dirty or vulgar person because you laugh at awkward or somewhat dirty card combinations.

I would definitely feel uncomfortable playing the Cards Against Humanity family version with sensitive or young children.

I like the game, but it really needs to be played with discretion and with down to earth friends.

I don’t think most grandmothers would enjoy playing this game with her junior high grandchildren and you probably shouldn’t play this game with your naïve aunt.

The Cards Against Humanity family version is fun and will create a lot of laughter, but make sure you are in the right company when you play. I do suggest that you play the game after you are already having a good time and don’t necessarily care about winning.

The game is meant to be played for laughter and not points. If you are the kind of player that thinks winning is fun, this may not be the game for you.

If you enjoy laughing with friends and family, this game will make your evening memorable.

Is Cards Against Humanity Similar To Apples To Apples?

Apples to Apples is an extremely popular family game that became a household name for many American homes and game lobbies.

Apples to Apples is fun to play in many situations and rarely if ever makes people feel uncomfortable.

I loved playing that game because it gave me a chance to get to know people a little bit better. I thoroughly enjoyed playing Apples to Apples with my grandpa.

He would choose the most random cards that no one could predict and I never won with the cards I thought I would.

Cards Against Humanity both the original and the family version have some similarities to Apples to Apples. They are both card games that revolve around a judge and a group of people suggesting ideas with face down cards.

The difference is that Apples to Apples is based around adjectives and nouns whereas Cards Against Humanity revolves around situations.

Phrases that need another phrase to complete the antagonistic situations. There are a ton of pictures floating around in cyberspace of the situations people created with Cards Against Humanity, but not nearly as many for Apples to Apples.

Both games are fun and create laughter, but Cards Against Humanity rules the realm in inciting imaginative situations that spark laughter and blushes in almost every round.

The gameplay is close enough that you could easily explain how to play Cards Against Humanity with people who have played Apples to Apples.

Just remember that Cards Against Humanity was designed to get a rise out of people and make situations uncomfortable to much of a mixed group.

The agenda is in the name of the game.

Can You Play Cards Against Humanity Online?

What do you do if you really want to play this hilarious and popular game, but all your best friends live far away? Do you come up with an elaborate video chat system or have them all buy the game and stack the cards?

Because they still have the free download available, they also have ways for people to play online. If you look around, you may find other sites that host the game and make it easier to gather a group together.

Short answer is that you have easy and free options to play this wickedly fun game with a hand-picked group of friends who love laughing at wild and crazy scenarios.

The internet is full of ways to connect to strangers and stay connected with friends. Why not play a fun game with some of your favorite people?

Cards Against Humanity is all about fun and connections at the expense of dignity and embarrassment of every party member involved.