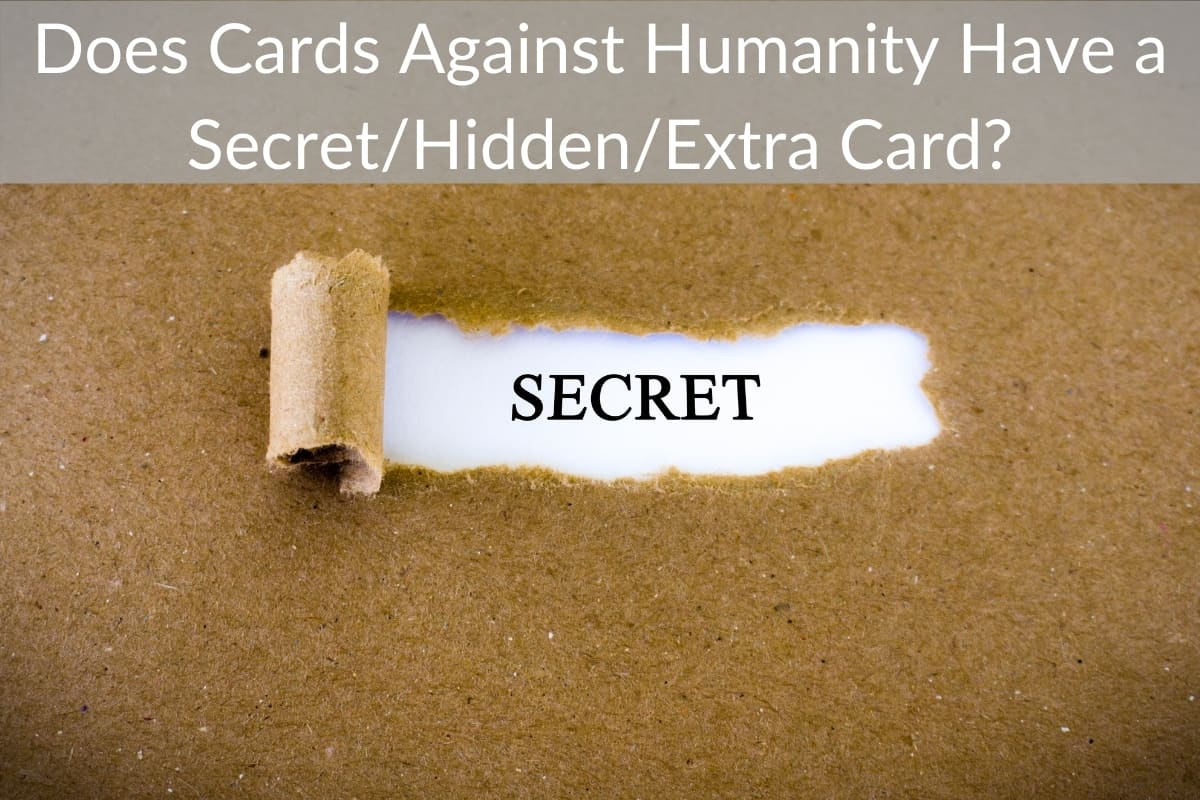 If you are reading this, you may have even ruined the box and are sure that someone started a prank that has gone viral just so people like you destroy their box for Cards Against Humanity.

Well, there is some good news and some bad news.

Since we are all here for the good news, we will start with the bad news.

You know all those boxes that you turned into jack-o-lanterns searching for these mysterious cards? Yes, the ones sitting on the table behind your phone stripped and ripped and cut up.

Those boxes, well they don’t contain the mysterious secret card.

I promise, there is good news. Don’t go away just yet. The secret of the secret card is in the next paragraph, I promise!

The biggest secret of the secret card is that you will only find it in one edition of the game.

Again, if you are here, then you are likely a fan of the game Cards Against Humanity, and you likely have multiple expansions to go along with your main game.

The only  expansion you need to search, though, is “The Bigger, Blacker Box.” Within this box you will find not only one, but two secret cards.

The box expansion edition, “The Bigger, Black Box,” was released in November of 2016. It was, like it’s name implies, a bigger box to hold the multiple expansions that were available at the time.

Now, the two secret cards are a large step to the darker side of this already raunchy party game. If you think the game is a little out there for you, I wouldn’t suggest trying to find these two hidden cards; however, if you are this interested, that is probably not an issue for you.

What Age Is Appropriate For Cards Against Humanity?

The team at Cards Against Humanity has decided to put out a game that you really shouldn’t play with your mother, but if you do it is likely something you will get very embarrassed from while playing.

That being said, the base game of Cards Against Humanity is under no uncertain circumstances written and designed to be played by mature audiences. I urge anyone considering having this game as part of their collection to understand that the cards included will be considered over the line by many.

Cards Against Humanity is rated by the company to be played by those 17 years old and up. The reason for this is the game dives deep into categories that no one under the age of 17 would likely be comfortable with.

I would venture that many over that age feel it is over the line, and I truly urge you to check out some of the cards before purchase if you get embarrassed easily or are not a fun of raunchy humor.

Cards Against Humanity has made it very easy to do your homework on their product.

Their base game is available to download and print for free on their website, and has been for over a decade. The one thing they don’t want you to do is be surprised by your purchase.

That also means you can print and play Cards Against Humanity without actually buying anything from the company. You do have to venture to an online or retail store in order to buy any expansions to their original content, but it is pretty cool that the company has maintained the game on their site that way.

What Is The Difference Between Cards Against Humanity Boxes?

As the popularity of Cards Against Humanity continues to grow, the company continues to produce high quality expansions to their original game. Some of these expansions come in boxes, and others come in packages like baseball cards.

Often these expansions are limited runs that are produced once and are only available until they are gone. Others continue to be produced, and even have been combined to help you maintain your collection a little easier.

The difference between each box is going to be the cards. Every box will be a unique set of cards to expand the original Cards Against Humanity game.

The first six expansions were combined a few years ago and relabeled as the Red box, Blue box, and Green box.

Each box you add to your collection will expand the variety in your games of Cards Against Humanity.

Each expansion will contain both black question cards and white response cards. The number of white to black cards varies, but in general you will see between a 5:1 to a 6:1 ratio.

Some of the expansions are more graphic and offensive than the original game, so if you are looking to take your game even further into the gutter, be on the look-out for these expansions.

Other expansions venture into specific categories. You can find expansions like 90s Nostalgia, Fantasy, Dad, Food, and The Theater. If you want to tailor your box, there are lots of options to do so.

When we look at the landscape of board games through the 2000’s, Cards Against Humanity might have created the largest buzz in the last decade.

From a successful Kickstarter, to a free-downloadable game, to now having dozens of expansions available, Cards Against Humanity has found a way to succeed.

Not only have they found a way to succeed, they have also capitalized on their viral content.

Of course a game as extreme as Cards Against Humanity would think to hide cards in the largest box they offer.