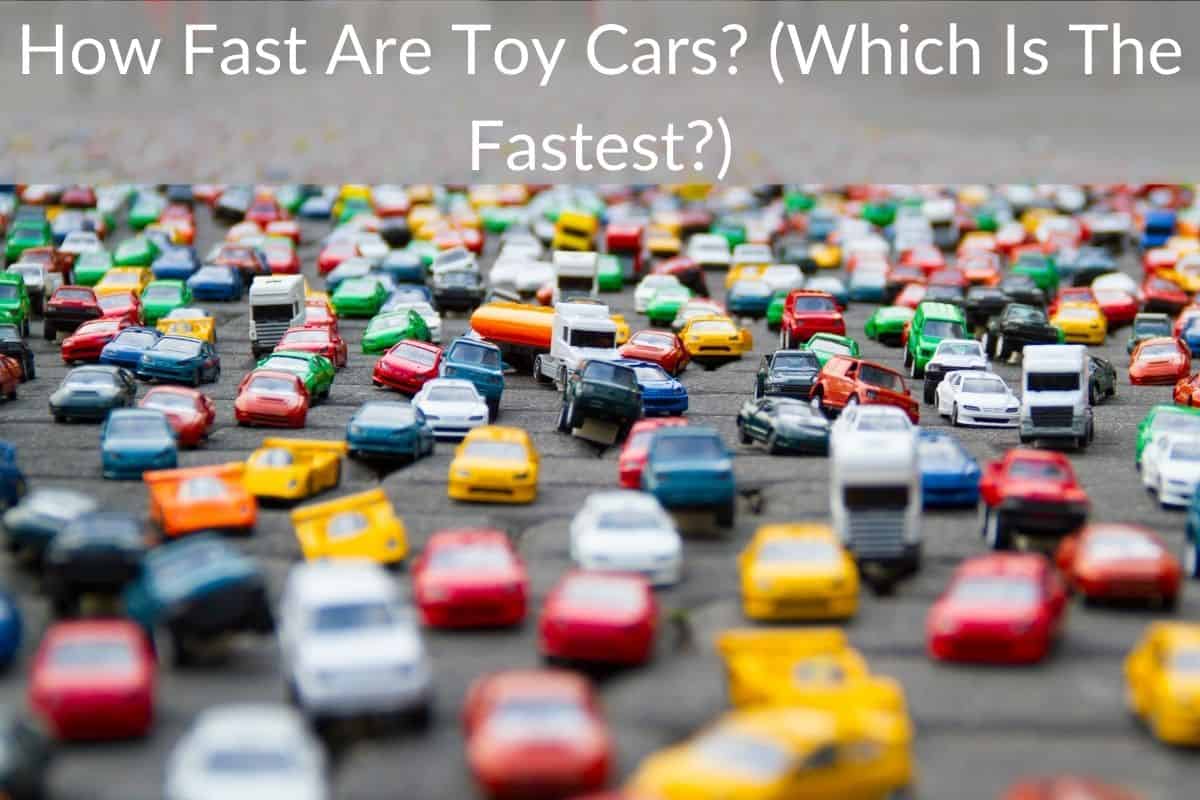 To them it’s all about the speed. Being the proud owner of the fastest car on the road. We don’t normally consider that a lot of toy cars are fast too.

Little boys can’t get enough toy cars. They fill up their toy boxes and sit on display shelves in their rooms. From the time they start playing with toy cars, they dream of driving their own real car someday.

Friction, weight, gravity, and traction all have a say in how fast a toy car will go.By lowering the weight of a toy car you can increase traction and decrease friction making it go faster.

Now if you are an adventurous adult looking for a fast toy car for a race with your buddies you could consider a RC car. A remote-controlled vehicle is one that is operated through a controller and although these toy cars range from $30-$800 or more they can also go 100+mph (for the fastest model)!

Some are fancy and are designed for speed while others are meant for everyday enjoyment while still going 30-50mph!

To see the fastest toy car on the market just click here.

Toy cars are an exciting toy to play with but of course some go fast, while some go slow. What affects the speed of a toy car?

Let’s say a toy car is moving along a smooth, paved driveway. Its wheels roll effortlessly as it continues at a decent rate of speed.

A second toy car is moving across a rocky, gravel driveway. Its wheels hit bumps all along the way while it continues to slow down with every bump it hits.

The third car is placed on the flat surface but high on a ramp. It has a lot of speed going and ends up going faster than the first car.

FInally a fourth toy car is placed high on a ramp but on the rough surface and let go. This car also has a lot of speed on its way down but when it’s wheels come into contact with the gravel it begins to slow down fast.

This is called friction or resistance.

The first toy car on the bumpy ground is slower because it has so many things getting into its way making it lose its momentum. The toy cars on the smooth ground have less friction between the rims and the road and so it has nothing getting in its way to slow it down.

A toy car accelerating down a ramp is going to be the  fastest because of the gravity pushing it down the slope.

Which Toy Car Is The Fastest?

Now, there are ways that you can modify a toy car to help it increase speed. One of these ways is to remove any parts of the car that are not necessary to its operation. This will make the toy car lighter.

You can also just purchase a toy car that is meant to go fast.

The fastest toy car is a remote control (or RC) car. The Traxxas XO-1 is faster than any other production toy car with a top speed of over 100MPH!

The Traxxas XO-1 is an amazing toy vehicle. Its sporty design and can reach a speed of 100mph in 2.3 seconds, this toy car is fast!

This RC, all wheel drive toy car is pretty cool but comes at a steep price as well.

When you are in possession of one of these amazing vehicles you will most definitely be the coolest “big kid” on the block. For more adult worthy toy cars just click here.

Looking just like a real car, kids will feel like the coolest kid on the block when they own one of the fastest toy cars. Several fast toy cars for kids can be found here.

What Is The Most Expensive RC Car?

Some RC cars are more than just a toy. They are expertly designed and a lot of work goes into making them.

The most expensive RC car made to date is the Freefly Tero which costs $5500! This RC car is actually used to film chase scenes in movies so it’s not really a toy!

This four wheel drive toy car is incredible as it holds a camera to capture action scenes that would be risky for a human to be involved in. It can be controlled from afar and is perfect for those crazy car chases.

Since it is so craftily made, you can understand why it is the most expensive.

The XB Hornet Black buggy, the Losi 5Ive-T 2.0, the Kraken Vekta.5, the Traxxas XO-1, and the  AUTOart 1/18 Mad Max2 – The Road Warrior Interceptor are among the most expensive regular RC cars out there.

Their creator went all out in order to make these the speediest racing machines. That is also why they cost so much.

Lets not forget about the good old fashioned diecast cars.

Some of them can get really pricey too, especially one that is made with gold!

So, how fast are toy cars? Well, it all depends on the friction. Is there a way to make the toy car go faster or give it more resistance to make it go slower?

How fast a toy car can go also depends on the kind.

Obviously, a remote-controlled car is going to go a lot faster than a kid’s diecast car because that is what it is meant to do. A fast RC sports car is going to gain you a lot of victories during those weekend backyard races.