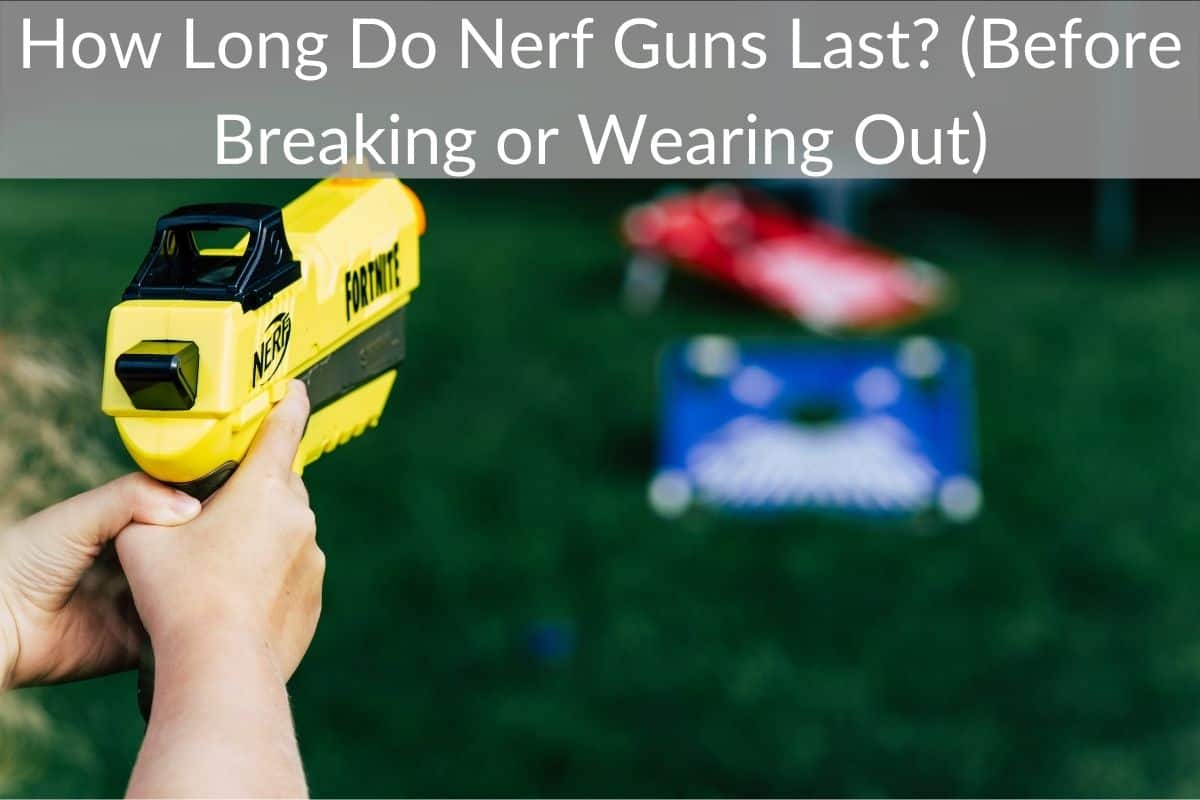 One of the most prominent toys to come out of the turn of the century is the Nerf gun. It doesn’t matter if you’re in your teens or twenties; you probably know about Nerf guns.

Nerf guns use a blaster action to shoot a bullet made from their special Nerf foam into the air in the direction of an opponent. The concept for Nerf guns was first introduced in the 1990s but was popularized in the 21st century after realistic-looking toys were frowned upon by concerned parents.

Nerf guns aren’t always called guns; their given name is a Nerf Blaster. However, aficionados normally refer to them as Nerf guns.

These blasters are great for fun, but if you think of these as an investment, you may want to think again. Nerf guns involve a very rigorous piston mechanism so they may not last as long as you’d like.

In this article, I will look at the duration that Nerf guns last before breaking or wearing out so you have a better idea of how to proceed with the buying of these Nerf guns.

Nerf guns will last for many years of regular use as king as they are properly taken care of. If they are left out in the weather or used improperly (in pools, mud, etc.) then their lifespan will be shortened.

The simple answer to this question is most Nerf guns will last as long as you take proper care of them.

Most Nerf guns will last many years. However, wearing out depends on how often you’re using the gun and the way you have handled a Nerf gun.

Nerf guns are also available in many different models and varieties. So, this has much to do with how long they will last and can perform their functions accordingly.

However, to ensure longevity with these Nerf Guns, you still need to take good care of them.

Why Would You Want Nerf Guns to Last A Long Time?

Nerf guns aren’t necessarily expensive, and they’re also toys. So, why is their longevity important for users?

Well, it’s no secret that many people engage in war games using Nerf guns. There’s an entire community of people who get together and engage in Nerf gun battles.

These battles require that your Nerf gun responds to the enemy’s artillery. It would be very frustrating for anyone to engage in such warfare only to realize that the Nerf gun you brought has a jammed piston, which will no longer work.

Thus, knowing about the longevity of a Nerf gun helps you make the correct decisions accordingly.

Even people who might not engage in serious “warfare” buy Nerf guns to play around with their siblings, and they will want their blasters to last a lot longer than a month.

Additionally, many Nerf gun users are conscientious of the environment, and Nerf guns are made mostly of plastic. Thus, discarding Nerf guns every time they failed to work and buying new ones would contribute a significant amount of damage to the environment, which many users don’t wish to engage in.

In these cases, customers will often decide to fix their Nerf guns, either using a Youtube tutorial to fix up their guns themselves or taking the guns to an expert.

However, this is also risky as if you don’t do the work or repair properly it might break again pretty quickly.

What Should You Look For in Nerf Guns?

As I mentioned before, Nerf produces a wide variety of its blasters and guns. However, how do you know which Nerf gun is the best choice for you?

Nerf guns are fun even when you’re not engaging in a bloodless gunfight with your friends. However, to know what you need, you have to define why you want to get a Nerf gun in the first place.

Here are some things you should look into before you buy yourself a Nerf gun.

You have to understand why you’re buying a Nerf gun in the first place. Your choice of a Nerf gun is dependent on whether you want the blaster only for fun or if you want the gun for Nerf combat.

If you want a Nerf gun for combat, you would want something more reliable and a gun that can shoot multiple bullets in one go for maximum impact.

Certain Nerf guns are easy to move around with, they’re not too bulky, and you can move around quickly with them on your body.

If you want to be a more active player in a game with friends then you’d want a blaster that’s easier to carry so you can whip it out easily and attack your opponents.

There are Nerf guns that have a substantial range of up to 100 feet. The range is suitable for people who want to engage in Nerf wars from a distance.

If you’re the kind of player who lies back and attacks from a distance, you’d want a gun that emulates this kind of behavior.

It’s essential that the Nerf guns you play with last for a long time. Longevity means that you can accumulate different Nerf guns over a period of time and add them to your collection.

If you’re a smaller or petite person, you will likely prefer something you can carry in your hands easily. Weight isn’t much of a problem with Nerf guns, as all of these blasters are made from lightweight plastic. However, many Nerf guns are big and can be bulky for smaller kids, teens, or adults.

Make sure that the Nerf gun that you buy works well for in regards to size of you or the person you are buying for is smaller.

Nerf guns last for as long as you take care of them. Like any other mechanism, these guns wear out after a while but if well taken care of they can last many years.

The more you use these blasters, the likelier they are to wear out. However, you can make some repairs and maintenance to them and make them last a long time.

When picking a Nerf gun, you should keep your individual preferences in mind to ensure that the Nerf gun doesn’t sit on the shelf unused since it doesn’t fit in with your play style.