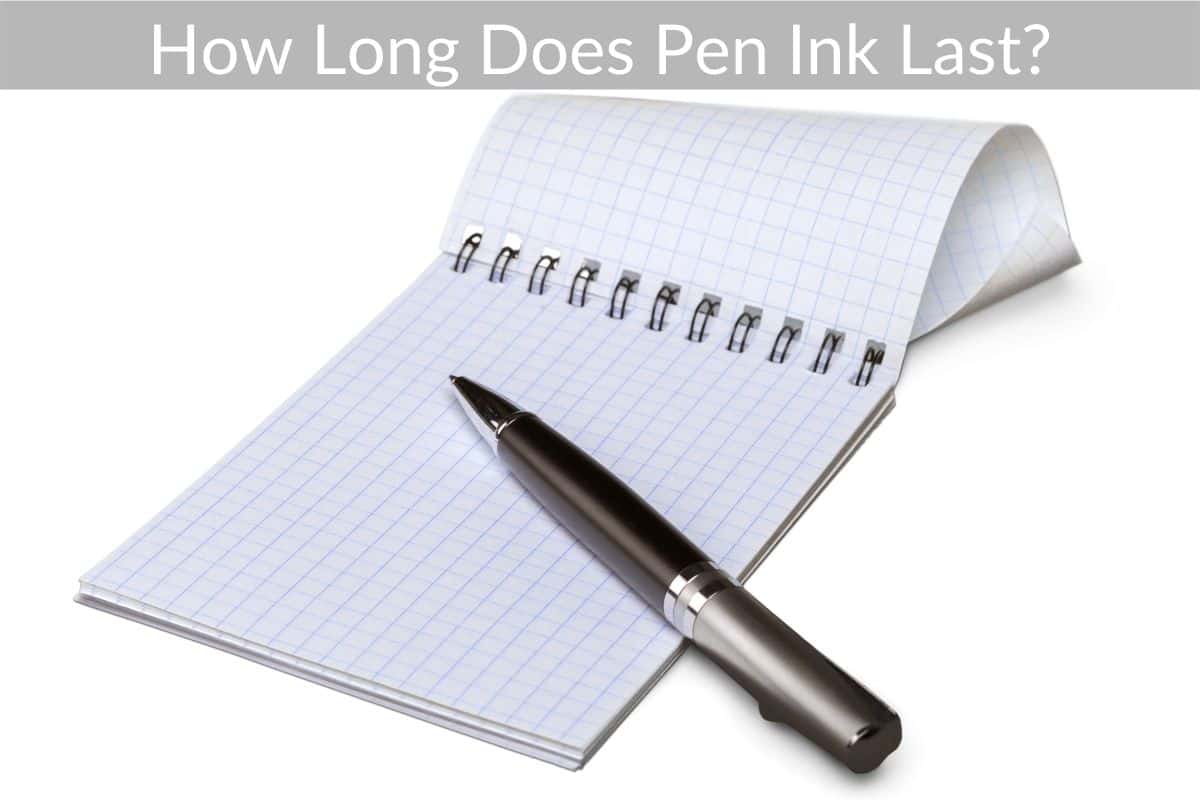 Are you someone that loves to write with a pen instead of a pencil? You don’t know what it is, there is just something about it in the way that it feels or the way that it looks.

One thing about pens though is that you can’t fix your mistake and if you are a perfectionist like I am then you will just stress out and have to start all over again.

That seems like a little bit of a waste of ink.

The ink is just going to stay there forever and remind you of the mistake that you have made. The question for today though, is: will the pen ink last forever, or, how long does pen ink last before it has to be used to write?

The shelf life of unopened pens is anywhere from 10-60 years depending on the brand and how they are stored. Once a pen has been used a few times you will typically have a few years before the ink hardens in the tip and the pen becomes unusable.

Unopened pens have a much longer shelf life than opened ones, but even opened pens can be used for many years after opening, as long as they are not contaminated through unhygienic use or left in the hot sun.

There are many types of pens that will allow you to refill it easily and that ink will normally come in a bottle. This ink should last a lot longer, especially if it is not opened yet.

So if you are one of those that loves to write in pen, whether it be the aesthetic or the feeling, just remember to use up the ink in less than 60 years, or else that ink could be dried out.

You should also keep an eye on your pens to make sure they do not get contaminated or left exposed to the sun and heat as it will wear out faster.

To see the most popular pens (yes some are more popular than others) just click here.

Does Pen Ink Fade Over Time?

Again, if you love to write in pen for your notes in college, an important work meeting, or just in your journal each day, you may wonder if that ink will fade over time.

You don’t want to lose what you have written, especially if it was super important. How long before it fades, and does it ever fade at all?

Unfortunately, pen ink will fade over time however it will last decades as long as it isn’t exposed to the sun. If you want to preserve something for longer than that then store it in a cool dry place away from the sun and it will last even longer.

That is just the reality of it. The pen ink is going to fade as time goes by. It’s just a matter of how long.

Different brands of inks will fade faster than others will. No matter the surface that you are writing on, the ink is going to fade but not until after many many years.

If you are taking notes or you are just simply writing something that you know you will need or want to read sometime down the road, just keep in mind that it will fade after a few decades so you may need to rewrite copies of it.

Pen ink was not made to last forever and it will just disappear after a few decades in the closet, attic, or basement.

You found an old pen while you were cleaning up and you don’t know how long the pen has been there. Is it safe to use it? Has the ink gone bad? Does pen ink actually go bad?

While ink can go bad, it rarely ever does. In theory, you should be able to add some distilled water back into your ink bottle, but rather than risk it, you may just want to throw it out.

Have you gone to use a pen and then the ink just comes out a little slimy. That is probably a sign that the pen is pretty old and the ink has gone bad.

You can risk using it, but I would recommend that you just throw it out.

Should You Shake Ink?

For those that are looking into becoming a pen enthusiast, you may have already bought some bottles of ink. You may not be too sure of how to handle the ink. Are you supposed to shake it before you use it?

The chemical makeup of Noodler’s ink is such that it needs to be shaken if you want it to remain the same color and have the same characteristics.

Although not all brands need to be shaken like Noodler’s Ink does it won’t hurt to shake up all of the ink bottles a bit before using them.

In most cases you will want to be sure the ink isn’t separated so giving it a quick shake will ensure that that hasn’t happened.

Can You Use Old Fountain Pen Ink?

Are you able to use the old ink as well, if you were to come across it?

These old inks contained cleaning agents that were meant to keep pens in good working order.

To make it simple. Yes, you can use old fountain pen ink. Remember, you can use old ink and ink can last for several decades, just be careful because it does have the potential to go bad and ruin what you are writing on if it has the SITB issue (mentioned above).