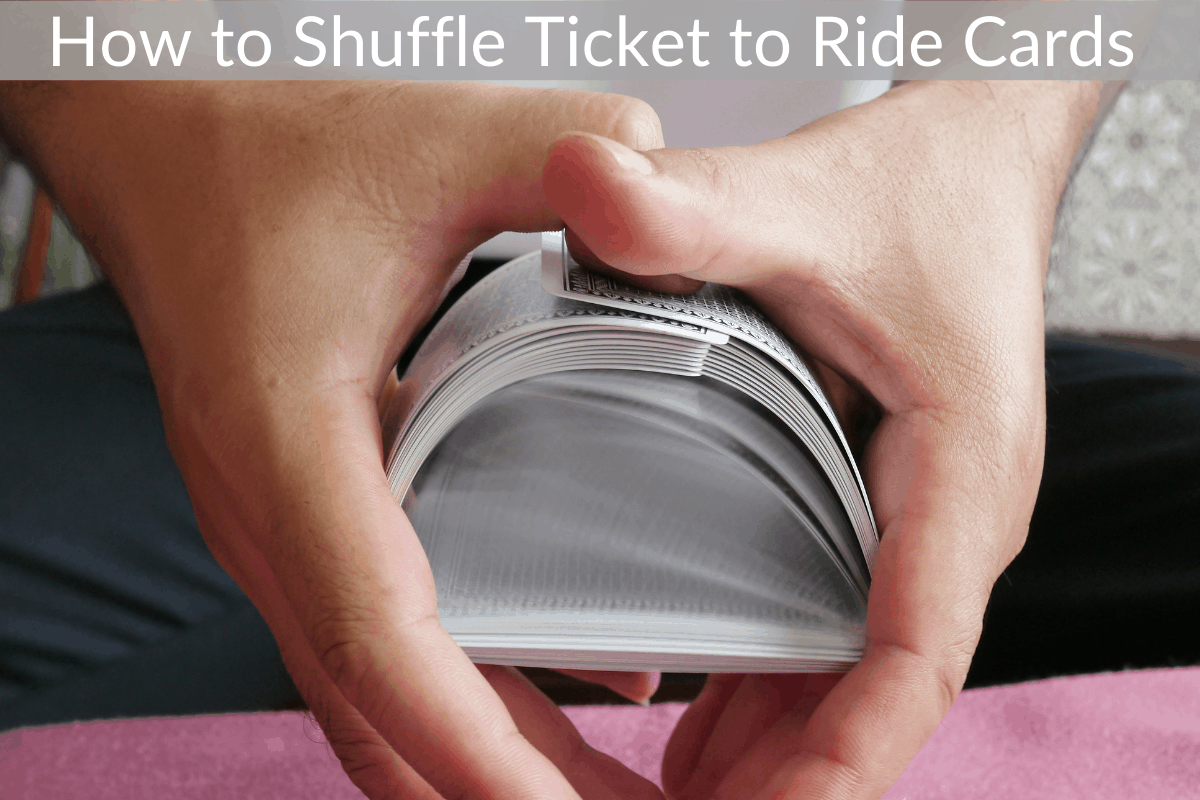 Ticket to Ride is a board game that offers fun and adventure for families and individuals of all ages.

Different players have their own different techniques to win the game and some will even formulate tricks to try and deal with the trouble they usually have in shuffling the cards.

Many players experience the hassle of shuffling the cards and end up getting the same train cards back to back.

This is especially an issue with the original ticket to ride game since the cards are quite small which makes shuffling them incredibly difficult.

To make shuffling the Ticket to Ride Cards easier you will want to create 3 to 4 discard piles and then spread out each completed train set to the different piles while you are playing the game. When it is time to shuffle the cards, place the discarded decks into one group and do 2 to 3 shuffles.

With the small card size this is one of the best ways to ensure that the cards are almost always mixed up well as shuffling them like you would a normal deck of cards is really difficult.

Using this method also helps to shorten the shuffling time as instead of having to get 4-6 cards of the same color mixed up into different parts of the deck that is already done when the cards are played.

Such a method will mix the cards much better than the usual style of shuffling.

To see the most popular Ticket To Ride games that are on the market you can click here.

Besides the trick mentioned above, there are other things that you can try as well to make shuffling the Ticket To Ride cards a bit easier.

Some of the most popular methods are:

Put the cards in sleeves

Some players cannot do a very thorough shuffle because of the Ticket To Ride cards’ small size. To be able to shuffle the cards rigorously you can put them into card sleeves.

Just make sure to choose the ones that are the correct size that match the smaller Ticket To Ride cards.

Aside from ensuring that the cards are mixed and shuffled properly, putting the cards in sleeves can also help them to stay in good condition even after playing the game over and over again.

You can take advantage of all of the opponent’s turns and shuffle the used cards while you aren’t playing.

When you’re taking a break or using your time to think of a move, it’s a great chance for you to get ahead of the game and get the cards already shuffled up.

Later on, when a player plays a 5+ route, put the cards into different sections of the discard pile. That will help there not to be a ton of the same color train cards in one spot.

I mentioned at the beginning that you can make multiple discard piles to help with the shuffling. Another option that you have is to put all of the same train card types into their own pile.

Then when you start to get low on draw cards you simply start taking one from each stack over and over again until all of the discard piles are used.

This will of course give the same pattern throughout the deck so you will then have to shuffle it as normal but this will help keep from having giant clumps of the same color anywhere in the deck.

Different Shuffling Techniques for Ticket To Ride Cards And Other Games

There are multiple different methods for shuffling the Ticket To Ride cards (and all cards honestly). Some of the most popular shuffling techniques are:

Considered as the most precise shuffle in the world, the Faro Shuffle can take a lot of time to master. But all the pain will be worth it when are finally able to master shuffling cards this way.

You should apply the Faro Shuffle technique only if it’s called for. Using it randomly or with little practice could serve you the opposite of a good shuffle.

To do the Faro Shuffle you will need to split the deck equally into halves and then hold each pile on each of your palms. Combine the two sets and at one corner, push them all at once by applying some pressure.

Firmly pressing the cards weaves the set in a solid structure. Avoid jamming the cards harshly altogether as this technique requires your precision and cautiousness and jamming them can bend the cards.

With continuous practice, you’ll learn how to use Faro Shuffle properly and the cards will all just slide smoothly into each other.

Card dealers and magicians are some of the professionals who can usually pull off the mechanisms of the Faro Shuffle.

The remarkable highlight of using this technique is that when you execute 8 perfect Faro Shuffles, the deck will turn out in the same order you began with.

Dedicated players can even learn the art of the one-handed Faro Shuffle. This technique is honestly impractical but it’s a cool way to show off your new shuffling skills.

Asian countries are the top users of the Hindu Shuffle technique.

This method is very similar to another shuffling technique called the Overhand Shuffle. The Hindu Shuffle has mechanics of moving along toward the direction of the long edges instead of parallel to the shorter ones.

This shuffling technique requires getting packets out from the top part of the deck pile by grasping them using your thumb in a long edge and a few of your fingers along the other edge.

One at a time, peel the packets from the top of the deck and make sure that they will fall into your hand — the one you used with your fingers and thumb for grabbing earlier.

Although the Hindu Shuffle is great compared to the Overhand Shuffle, the latter technique is much easier to learn.

Grabbing the packets cleanly can present a presentation of a classy way of shuffling as it’s professional and smooth looking.

For other card gamers and magicians, they referred to the Hindu Shuffle as a vital technique in achieving the ‘force’ in performance or gameplay.

If you’re familiar with gambling, then the Riffle Shuffle might be something that’s not totally new to you.

The Riffle Shuffle technique is mostly used in serious card games, particularly in casinos. Best to be performed on tables, this technique keeps the cards entirely hidden so they cannot be seen at all.

It is quite a bit safer compared to the other shuffling methods as it prevents sneaky moves often done by crooked dealers or players.

The Riffle Shuffle is sometimes referred to as the Dovetail Shuffle as well.

To perform the technique, divide the deck equally into two parts and place a set in one hand. Mirror the actions of your two hands while you are combining the two decks.

Gently riffle up the packet’s side using your thumbs. The cards’ respective corners should overlap while you are doing the shuffle to weave perfectly. Push the cards into the other pile after the riffle.

Neat and very easy, the Riffle Shuffle works in any situation, whether it is just within your hands or you’re performing the shuffling on a table.

With the deck face down on one palm, peel some small packets from the top using your thumb until you got the entire hand.

The Overhand Shuffle is not the most effective technique of shuffling. However, once you learn and master the technique, this could be a practical option for you to perform in normal games such as Ticket To Ride.

How you shuffle the cards plays a vital role in Ticket To Ride. The good news is that there are many different techniques and tricks you can apply today to work into your game smartly.