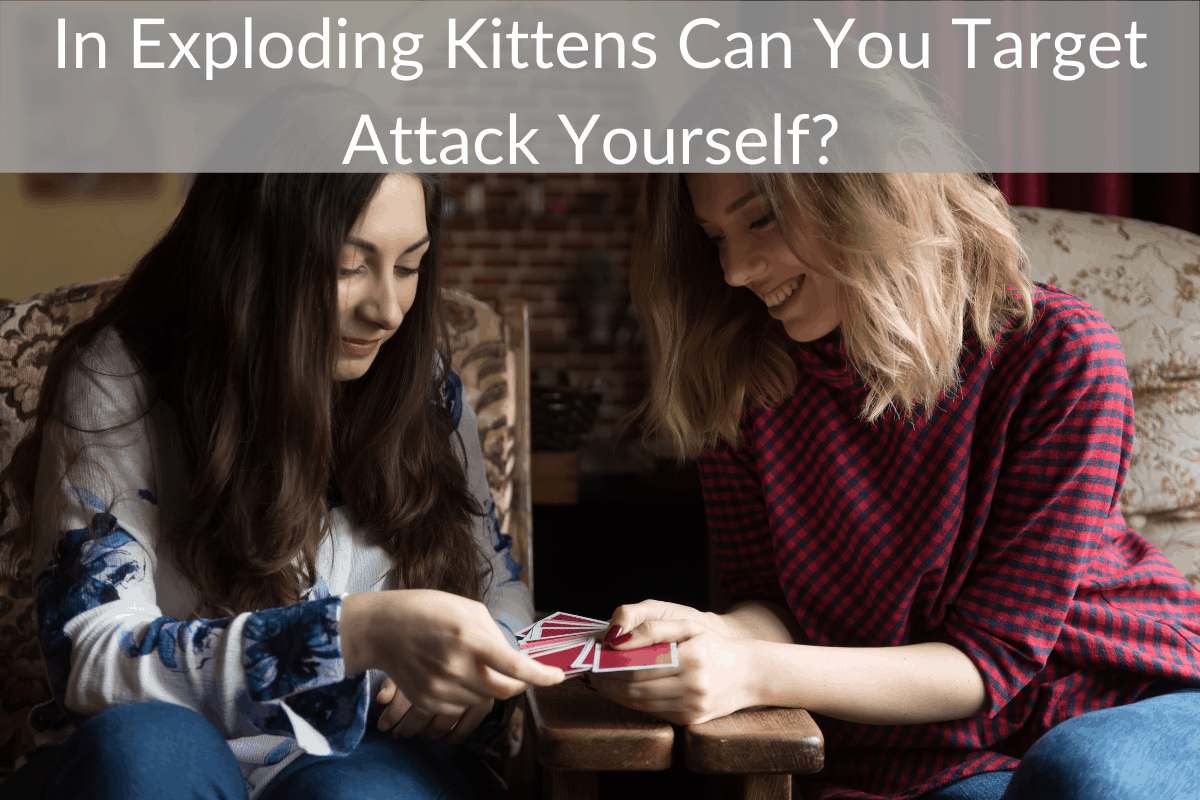 Exploding Kittens is a popular card game that was released in the summer of 2015. Although this card game is no longer “new” there are still many people who have never played it before or are unsure of the exact rules.

Since Exploding Kittens has become so popular they have released additional expansion packs over the years that have different cards in them that alter the game slightly. One such card that was added into the game was the Targeted Attack card.

This card specifically states that it can be used to target your attack at anyone at the table, but does that mean you can also attack yourself with it?

Per the instruction on the card you end your turn and can force the player of your choice to take two turns. Per those instructions it would seem that you could attack yourself if you chose to. However, Exploding Kittens came out in 2017 and said officially you couldn’t do it.

You can see in the tweet below that it isn’t officially allowed but it’s “your house, your rules”.

Officially “no,” but you absolutely should! Sounds like a self slap card to us. Your house; your rules.

Although “officially” you can’t attack yourself if that’s how you want to play it and everyone at the table agreed beforehand then it’s totally fine to do so. Afterall, there are tons of “house rules” that people play games with all of the time so why wouldn’t you do the same with the Exploding Kittens game?

To see the most popular variations of Exploding Kittens currently on the market you can click here.

Why would you want to attack yourself?

If you’re reading this you might be wondering why in the world you would want to attack yourself. Afterall, an attack card is supposed to be a way to punish other players so why would you want to hurt yourself?

Let’s say that you just played a see the future card and saw that the top 2 cards were a Targeted Attack and a Defuse. Obviously getting the Defuse card would be great but if you don’t have an Alter The Future card it would be impossible to get.

If you can play a Targeted Attack card on yourself it would mean you could end your turn and then take two additional turns thereby drawing that coveted Diffuse!

This strategy could also be used at the end of a game to allow you to draw two card back to back instead of one leaving your opponents with only bad cards left to draw.

Either way, being able to use a Targeted Attack card on yourself does bring some extra strategy layers into the game!

Some other cards that were added with the Imploding Kittens expansion are:

If you haven’t purchased any of the Exploding Kitten games yet then starting with the Imploding Kittens version allows for a lot of extra strategy and gameplay because of the extra cards that were added.

Tips and Tricks that will help you Win Exploding Kittens

There are three methods that can be employed for helping you to win the game of Exploding Kittens. Those methods are:

I will discuss each of these methods below.

The core idea behind playing defense is quite simply survival. Ironically this is what a party game like Exploding Kittens is all about. There are a few strategies that can help you stay alive for a longer period of time however.

So are you wondering how to best play defense? Very simply, just try not to play as much as you can. There are a few cards that will help you in defending your life such as Nope, Attack, Shuffle and Skip.

So how do you stock up on these defensive pile? Well, you have to start slow and have patience. Let your opponents use up their Defuse cards. Don’t keep a heavy agenda for the game. This might need you to pass a turn very early on in the game. While playing a defense strategy the use of Skip and Attack cards are very important. As a matter of fact, the Attack cards are another form of Skip.

We say this because even though the Attack card forces your adjacent player to draw twice it also allows you to skip your draw.

Nope cards are also very important and relevant when it comes to protecting yourself. You need to stock up on enough Nope cards to protect your hand from attacks from other players. And when all odds are against you, use the Shuffles card.

You can use the Shuffle card in case your opponent uses a Defuse card and puts the Exploding Kitten back on top of the pile for you to pick up.

Do whatever it takes to protect your Defuse Card/Cards. Keep them safe and as a secret from other players if at all possible.

At the beginning of the game go around stocking up on defensive cards without attacking others. The beginning is normally the safest time to collect cards. Then once an Exploding Kitten card has been drawn it’s time to get defensive and start using all of the cards that you have amassed.

Taking out other players

This is where it gets interesting and exciting especially if you like knocking out others (in a game of course!). Exploding Kittens is not as much about defending as it is about getting other players out of the game.

It is not the defensive part that makes this game fun, so it is the offensive strategy that is much more popular. If you really want to enjoy the game you will have to at some point move out of defense and move into the battlefield to take out all the players one by one.

The two most relevant cards in the offensive strategy are the Attack and the favour cards. The use of these cards forces other players to part with their advantage cards. The 5 sets of 4 cards are also important. Although their use is not direct, if you collect groups of them it helps in the long run.

To play offense in Exploding Kittens you can take cues from popular gambling games. You can bluff in this game if you use the See the Future Card. By seeing the first three cards on the deck you can plan your attacks. It also keeps the other players on the edge.

Another trick that you should try is to save a couple of Attack cards/Skips for the end of the game. This is to make your opponents end up having multiple draws in a row. This increases their risk of ending up with the Exploding Kitten card which in turn increases your likelihood of winning.

You can look at it this way – when you use two Attack cards it means your opponent needs to draw 4 times in a row. That can fatal for your opponent if the number of cards in the deck is less.

Truth be told, although we have mentioned two ways of playing the game, in order to excel at the Exploding Kittens game you need to change your methods to adapt to changing situations. The better you get at playing a mixed strategy the greater your chances are of winning the game.

Ideally you will want to draw as many cards as possible at the beginning and hope that you aren’t the unlucky one to draw the first Exploding Kitten. Once that card is drawn you will want to play extremely defensively using See The Future and Alter The Future cards especially to be sure you don’t end up drawing an Exploding Kitten almost immediately.

Once that danger is passed (assuming it ever is) you can either go back to drawing passively or begin to go on the offensive. If at all possible use your four or five of a kind to get an extra Defuse card along the way.

Once you get to where there are virtually no cards left it’s time to go on the offensive and make other people draw as much as possible to increase their likelihood of drawing an Exploding Kitten.