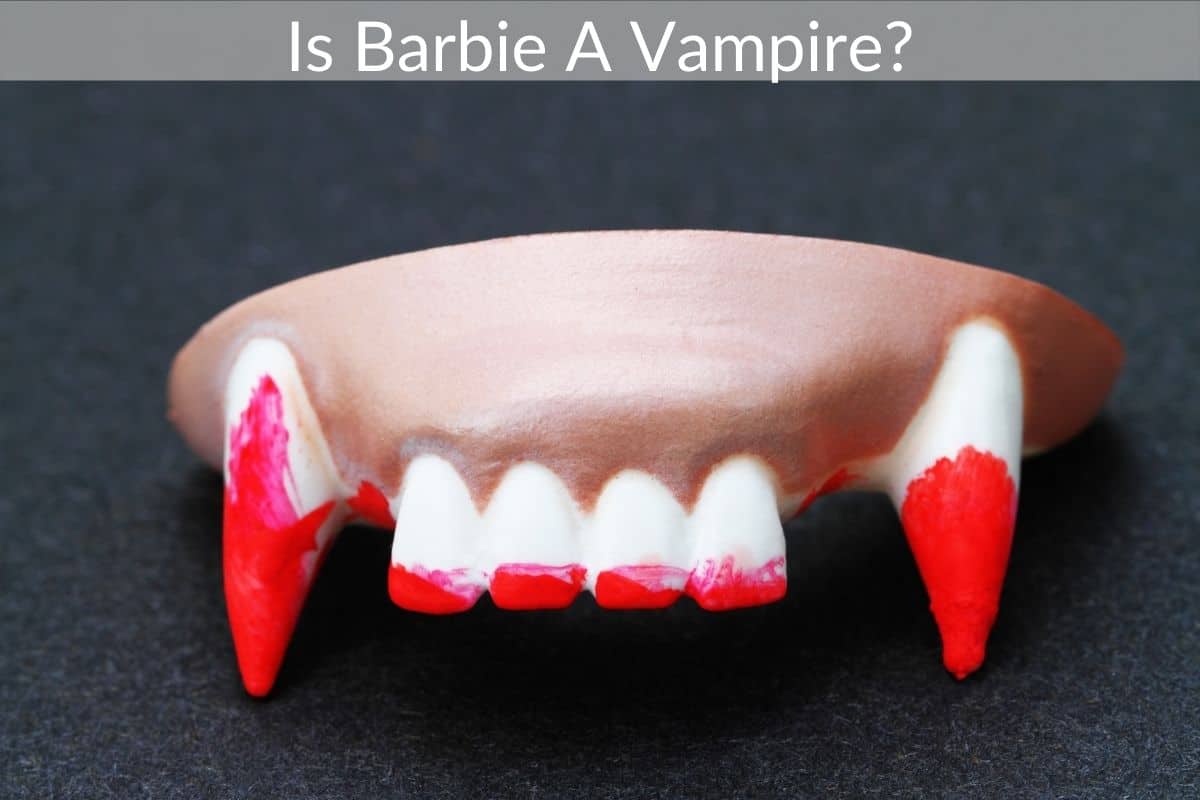 Barbie may be just another doll in the real world but she is a lot of things in the Barbie Universe. She has worked in 200 different careers, owned multiple houses, cars and pets, personified real women, and much more.

However, as much as Barbie is known to have a friendly nature, she also has a dark side. There is an ominous presence in the Barbie Universe in the form of a Vampire Barbie doll.

While Barbie is just a doll and not a vampire, she does exist in the form of Vampire Barbie both in Barbie Universe and in the real world.

So although Barbie might play a vampire in a movie, series, or in one of her releases she isn’t a real vampire.

The Vampire Barbie, better known as Haunted Beauty Vampire Barbie Doll, is a collectible Barbie for adults that was launched in 2013. She has long black hair that is tied in a sleek bun from the back.

The front hair is open and parted in the center. They fall in loose waves on both sides of her face, framing it and reaching her thighs.

Her skin is pale and ghostly. Her eyebrows are shaped in a round shape and are thin and long. She has long eyelashes and blood-thirsty red eyes.

Her lips are also crimson red, slightly parted to show her fangs. Her nails are painted a black color as dark as her hair.

Her outfit compliments her looks. She wears black chiffon and a red charmeuse gown.

The outfit has two statement jewelry pieces attached to it. The first jeweled piece is at the neck. A gold choker necklace attaches to the front of the gown and wraps itself around Vampire Barbie’s neck.

The second jeweled accent is attached over the outfit at the waist. It acts as a cummerbund to gather the waist and accentuate it. The gown reaches the floor, hiding Barbie’s feet under it.

Over her gown, she wears a matching red coat. The coat is made of the fabric shantung. Shantung is a shiny fabric and makes Barbie’s coat look glamorous.

The coat, while well fitted, is gothic-inspired and takes up a lot of space.

The dramatic collar reaches the back of her head and extends beyond her shoulders, framing her entire face and big hair. The coat’s sleeves are balloon-shaped and gather at Barbie’s wrists.

However, the Vampire Barbie was released as a part of the Haunted Beauty Collection.

Mattel Inc. launched Haunted Beauty Collection Dolls over four years from 2012 to 2015 and launched four dolls as part of the collection. Only one doll was launched per year, and all the dolls were released by the end of September or early October, in time for Halloween.

Besides the Haunted Beauty Vampire Barbie Doll, the collection carried the following dolls:

• The 2014 Haunted Beauty Mistress of the Manor Barbie Doll

All the dolls from the collection were priced at $100.

Barbie and the Twilight Saga Collection

However, the Haunted Beauty Collection was not the first time Barbie transformed into a vampire. From 2009 to 2012, Mattel Inc. launched multiple vampire Barbie dolls as characters from the famed book-turned-movie franchise Twilight.

Named The Twilight Saga Collection, the collection contained 16 dolls, out of which 14 were vampire dolls. The dolls were launched after the release of the first installment of the movie franchise and side by side with the later installments.

The vampire dolls in the collection included:

The non-vampire dolls from the collection were the Twilight Bella Doll (2009) and The Twilight Saga: New Moon Jacob (2011).

While it is unheard of for Barbie dolls to hurt anyone, a small detail can make one question Barbie’s niceness. In the Vampire Barbie’s bio, there is a mention of her delicate fangs leaving people enchanted.

Mattel Inc. might have added this detail to either promote Barbie or save themselves from being sued by customers. Either way, we should all remember that everything is possible for Barbie and that she can be anything!