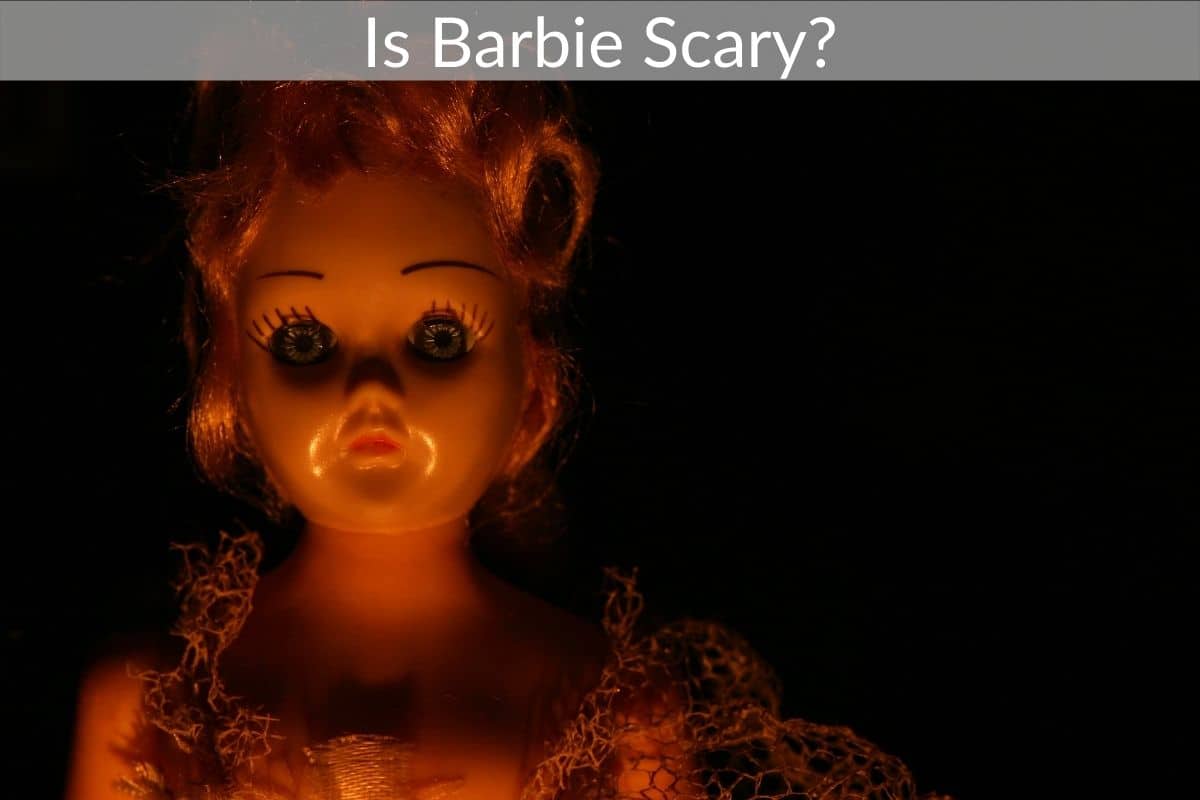 One of the fondest memories I have of my childhood is messing with my sisters while they tried to play with their Barbie dolls. Yes, Barbie dolls – not your run-of-the-mill dolls.

There was always something special about them to my siblings and the way they were marketed to the masses.

However, shockingly, somewhere down the line, the theories about dolls being scary became a thing. If you ask me, Barbie is still a more acceptable idea than the creepy porcelain dolls depicted in movies as some evil entities.

However, if I still have to answer the question “is Barbie scary?” I’m afraid it may not entirely be no.

Barbie dolls aren’t inherently scary and were never created to be perceived as spooky in the first place. However, thanks to pop culture, Barbie dolls did manage to be categorized alongside the bigger porcelain dolls.

Now going to the store and getting a Barbie isn’t scary and you likely won’t have any issues… but there is just something about a decades old Barbie that has been in a basement or attic that just starts to feel… off.

So while Barbies aren’t generally very scary (especially when compared to other dolls) I understand how some people might feel that way.

To see the most popular Barbies just click here.

“Do not play with Barbie dolls at 3 am,” “Urban legends about Barbie,” and “Barbie is watching us” are only some titles that pop up when you look up Barbie videos online. I have to give some credit to pop-culture here for making us have second thoughts about our sanity, especially when it comes to dolls.

It wasn’t very long ago when they were simply an object that kids used to play and go to sleep with.

Today, the idea of having too many dolls in a house is deemed creepy, and rightfully so. After all, movies like “Child’s Play,” “The Curse of Chucky,” and “Annabelle” are only some horror movies made after the idea that dolls can be possessed and can hurt those around them.

Only a few decades ago, a Barbie doll was something little girls would talk to as part of their playtime. However, times changed in a way that Barbie dolls also started talking back.

Soon after the “Hello Barbie” update Mattel introduced the world to, it became apparent that parents weren’t receiving it all too well. Their daughters were now talking to dolls that understood them and responded to their questions.

This had to be creepy, if nothing else.

Who knows what this update meant for the security of those who had these dolls. It’s only natural to suspect that toys of this nature can be a threat to your security, even though Mattel clarified pretty soon it was committed to assuring its customers’ safety, and that it did not break any government standards in the process.

So, more than Barbies being scary, it’s the collective “creepy doll” umbrella they come under that matters.

Unfortunately, there’s more to the idea of dolls being creepy than just pop culture and its depiction of them. Having a fear of dolls comes under a broad category of phobias known as pediophobia.

Hence if you thought that Barbie and Ken were just two characters of a story, you’re wrong. There’s a great chance that you or someone you know has somehow developed a fear of dolls while growing up, and there’s still very little knowledge on what could be the root cause.

In this case, it could simply be watching a horror movie with creepy dolls in it or another incident that may have been linked to dolls. Even something as harmless as narrating a story or an urban legend about them can trigger the fear of dolls in people.

Is The Fear Of Dolls Innate Or Acquired?

According to Kate Wolitzky-Taylor, a Ph.D. and a UCLA faculty member in the psychiatry department, humans aren’t born with the fear of dolls ingrained in them. She also presents an interesting analogy about how clowns were not scary until someone depicted them that way.

The fear of inanimate objects, therefore, is acquired. Moreover, our fear also has the ability to spread and become someone else’s fear. Hence, the more you are scared of dolls, the more you make them look like objects to be scared of, and the more that fear spreads among the masses.

So what is it that made you or someone you know so scared of a Barbie doll? Was it your own fear or someone else’s fear passed down to you?

Doesn’t it become a lot clearer now that we know that pairing something consistently with scary stimuli can lead to feelings of fear around that object?

What Else Does Our Fear Of Dolls Have To Do With?

There’s something really interesting about the fear of dolls that I’ve learned so far. Maybe my fear has more to do with someone else’s fear than my own, but before both you and I can convince ourselves to believe that, here’s another theory, and it may make greater sense than the last one.

Have you ever noticed how lifelike dolls appear sometimes? It’s almost like you have tiny humans placed on a shelf, and if you ask me, that does sound a bit creepy.

The phenomenon is what we call the “uncanny valley.” According to it, the more something looks closer to a human being, the more creepy it appears to us.

After all, we’re not exactly programmed to accept the idea of fake faces, are we?

It’s interesting how the article that started with “is Barbie scary?” has come down to a whole lot of complexities of the human mind and the role of media. Hence, we can conclude that a Barbie doll, just like any other doll, isn’t inherently scary nor is it designed to scare anyone.

However, what does make it creepy is the media depiction and our psyche that also somehow gets impacted in the process. In the end, you’re free to believe whatever you like as long as it keeps your thoughts guarded and your fears and confusions separate from facts.