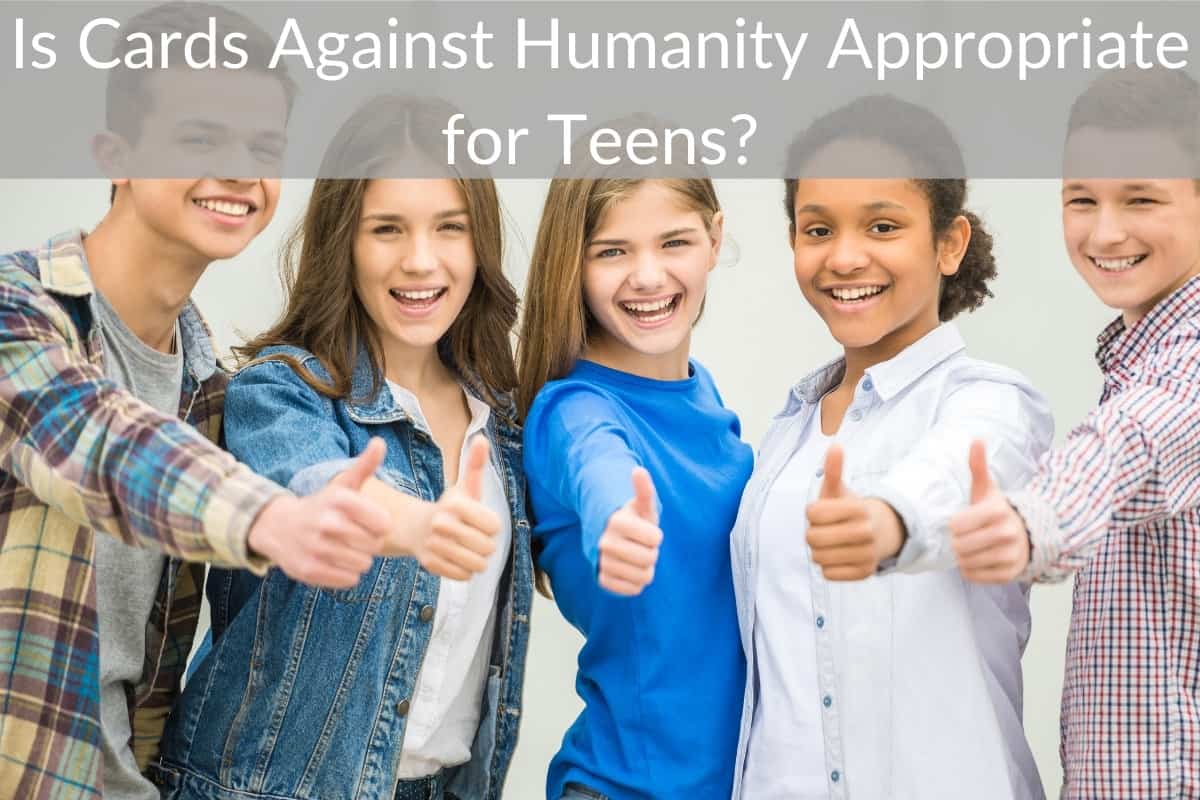 In today’s technology filled society, game companies are really pushing the boundaries to capture the attention of potential customers.

These tactics are becoming very popular among board and cars game creators, and there is none that pushes the limits quite as far as the team at Cards Against Humanity.

The team has been churning out risqué material since they first released their game through the crowd funding platform Kickstarter.

Cards Against Humanity is a play on the commonly used term “crimes against humanity,” and the intent of the game is to get everyone laughing and enjoying themselves.

The Cards Against Humanity designers have a recommended age to play listed as 17 and older, so if you are purely going on their recommendation then any teenager younger than 17 shouldn’t play the game.

However, no two teenagers (or families) are alike so ultimately you have to decide whether your younger teens should play this game or not.

When considering the game Cards Against Humanity for your teens, I would be sure to consider what you would or would not like to expose your child to.

Some topics that any participant playing Cards Against Humanity will be exposed to are very adult in nature, and at the very least you should educate yourself before handing a copy over to your teenager as a birthday gift.

There is some good news for you, Cards Against Humanity has all the cards that come with their core game posted on their website here.

The makers of the game believe that such a crowd pleasing game should be easy to obtain, and anyone can go on their website and download the game so they can print the cards out for free.

This has a side benefit for parents who are unsure if their teens should get or play this game, as they can evaluate the content in the game and decide if it is something they feel is appropriate for their family prior to purchasing the game.

So take some time and head over to the company’s website and look at exactly what cards are in the game.

While you are there, you can also check out all the expansions they have made over the last few years and can buy the physical game (rather than just download it) as well.

How Long Does Cards Against Humanity Last?

Games that allow a large number of players to have a good time, carry on conversations that are not related to the game, have loose and easy to explain rules, and don’t require a ton of attention to play are very successful right now.

When considering playing one of these games, you have to know how long the game is intended to take. Starting a game that is expected to take a few hours might be a bigger commitment that some of your guests are willing to make.

This could really bring down the party if you make the wrong decision.

Cards Against Humanity is expected to take between 30 and 90 minutes to play a game. Although the game designers put this timeframe on their product, you could really end the game early, or extend the play for much longer if you choose to.

If you invest in the expansions that have been released over the years, and set a high enough winning score, you could honestly play the game for multiple hours.

Really with a game like Cards Against Humanity you don’t even have to play to win. You can simply play it for the entertainment value it supplies.

The amount of laughter, embarrassment, and excitement supplied during play will keep you entertained whether your cards are being picked as winners or not.

Can You Play Cards Against Humanity With Just An Expansion Pack?

Cards Against Humanity is a party game that uses a dedicated set of cards to play.

If you are a fan of the game, you are likely to play it whenever the opportunity presents itself. Due to the limited number of cards in the game, you might get to a point where the game begins to feel stale or outdated.

The makers of the game have addressed this issue by bringing fresh content to their fans on a regular basis via releasing expansion sets.

Although it is possible to play a game of Cards Against Humanity with just an expansion set, it is a little drier when compared to the core game. The intent is to combine the expansion with the core game in order to expand the variety of play.

Using the smaller packs as a standalone game would cause you to play through the possibilities much quicker and might actually have the opposite effect from what you are looking for.

In addition to these larger expansions, there are smaller “booster” style expansions that range in size from 20 to 30 cards. These are normally themed packs and can tailor your Cards Against Humanity to better suit your interests or the interests of your guests.

Some of these expansions will even tie into common party themes. Things like 80’s or 90’s nostalgia, Sci-Fi, or Pride might be just the thing you need to take your party to the next level.

Before you take the game to your next party, be sure to check out the various expansions that could freshen up the content for you.

Although Cards Against Humanity was designed with adult entertainment in mind, the truth of the matter is teens are being exposed to the topics contained in the game at a much earlier age than most older people were.

Because of this, you might be okay with the game being played by your teenager.

The nice thing about a game like Cards Against Humanity is you can easily remove the cards you feel push the envelope too far.

Once you do your research, you should have a better feel for the game and if it is okay for your teenager.