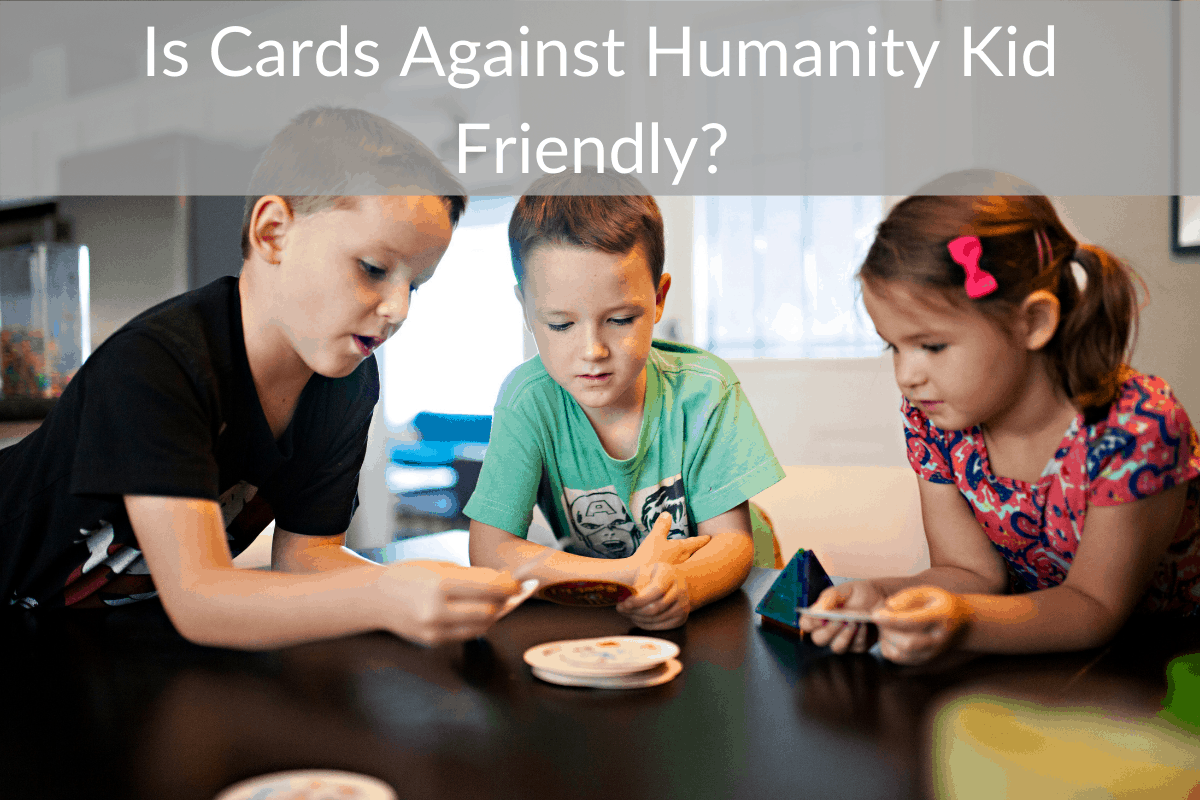 Cards Against Humanity is a card game designed to have players complete a fill-in-the-blank style statement. Its title is derived from the phrase “crimes against humanity”, a play on its intent to be politically incorrect.

There are several expansions that have been released over the years, as well as some additional stand-alone sets that expand the target audience of the original game.

Cards Against Humanity can be purchased as a family-friendly version, an adults-only version, and some more extreme expansions, but is it actually kid friendly?

Cards Against Humanity, in its original game, is not a game intended for kids. The target audience is 18+, and contains a lot of adult topics. Cards Against Humanity has expanded their line-up to supply games that are fun for anyone (including kids) to play with their families and friends but the original version is not kid friendly.

The game also has very intuitive gameplay. The majority of people can pick up the game and start playing without even reading the rule book. So if you are looking for something fun, easy to learn, and even easier to explain to others, this is a game to consider.

Overall, Cards Against Humanity is a great game that anyone in the prescribed audience can enjoy.

To see all of the different Cards Against Humanity expansions and spin-offs currently available you can click here.

Is Cards Against Humanity For Kids?

Initially designed as a print-and-play game, anyone could go to their website and download the cards and print off their own, at no cost other than the paper and ink. The cards contain words and phrases that are typically deemed offensive, risqué, and politically incorrect. In its original state, the game is suggested for players 17 years and older.

After their success on the crowd-funding site, they have had the opportunity to continuously supply their fan base with new content through expansions. Since the game’s initial release, Cards Against Humanity has released over 28 expansions.

The Cards Against Humanity Family Edition is a version of the massively popular game that takes the lude and risqué to a child-humor level, and this new game is suggested for ages 8-99 so it is perfectly fine for kids. Kids Against Maturity is also another version of the game that is kid friendly.

Now with their expanded line-up they supply games that are designed for both the adult crowd and the kids they have. This evolution by the team at Cards Against Humanity, has helped them grow from offering a free, downloadable, print-to-play game to annual revenues approaching $1 million.

What Version Of Cards Against Humanity Is Best?

The version of Cards Against Humanity that is best is very dependent on the group of people that will be playing it.

Cards Against Humanity is written and intended for adult audiences.

For adults who are okay with coloring outside the lines, find sexual jokes funny, and want to laugh for hours on end, the main game is where you will want to start. Once you have that, you can tailor your experience with the expansions that Cards Against Humanity offers.

For others, who find locker room jokes to be offensive, the stand alone Family Edition of Cards Against Humanity is likely the game for them. This was developed from a clean slate, and does not use any of the original game’s cards. It is written to be funny for both adults and kids over the age of 8.

If you have never played Cards Against Humanity before then buying the original game is your best option. If you already have that one then buying one of the multi-themed packs (such as the Nerd bundle or Hidden Gem bundle) is your next best option.

So which version is best for you might not be the best for everyone; however, owning one of these games might be a better decision than not owning one.

Understanding that they were limiting their audience and essentially letting other games companies sell games to people that wouldn’t even consider one of their products, Cards Against Humanity developed this new, much cleaner game that is appropriate for kids 8 and older.

Cards Against Humanity Family Edition is a fun game that is not only fun for kids only but can be enjoyed by the whole family. It allows younger children, teens, and adults to all participate which makes the game night a lot more fun for everyone!

Although some adults will prefer the more raunchy original version of the game, being able to play with all ages is a nice touch and it is still loads of fun.

Where Can You Buy Cards Against Humanity?

The popularity of Cards Against Humanity has grown fairly rapidly, and can now be found at both online retailers and brick-and-mortar stores.

Large retail chains, such as Target, Walmart, and Barnes & Noble carry the game and many of its expansions as well.

You are also likely to find Cards Against Humanity at most toy stores and board games stores.

You can also find it available on multiple websites, but the best place to start would be their own company website.

If you go to their website it will be very easy to navigate to the CAH store, and see their many available products. Here you will also find many limited edition expansions that you might not see in local stores. If you would like, you can even download the main version for free and print it yourself.

You can also go to other online retailers like Amazon. Amazon is often a good place to look if you are trying to save money as you can find deals on this game regularly or buy an open one to save money as well.

The best thing to do if you want to save money, however, is by shopping second hand. It might take some effort, but you can find games at low prices if you know where to look.

Thrift stores often have game sections where you can find games like Cards Against Humanity.

However, when buying used games, you have the chance that cards will be missing, which can affect the gameplay so make sure everything is there before buying it second hand.

How To Play Cards Against Humanity

To play the game each player begins by drawing 10 white cards, you will then select someone to be the “Card Czar” and play a black card face up. The Card Czar then reads the question or fill-in-the-blanks phrase on the black card out loud.

Each other player will then select one of their white cards that best answers the question or fills in the blanks and passes that to the Card Czar face down.

The Card Czar then shuffles the cards and reads each card out loud and selects the one they deem funniest. The person who submitted that card receives an “Awesome Point” and the next round begins.

Play will continue until all the black cards are gone, or the party feels they are ready to move on.

If you are looking for a kid-friendly game, it would be best to stick with the Cards Against Humanity: Family Edition as it’s a great game for both kids and adults.

Like many games released over the last few years, Cards Against Humanity is popular for its comedic relief as much as its gameplay. If you buy the version that best fits your audience, you will have hours of fun lined up.

Since the game is so popular, you won’t have any trouble finding it online or at big retail stores.