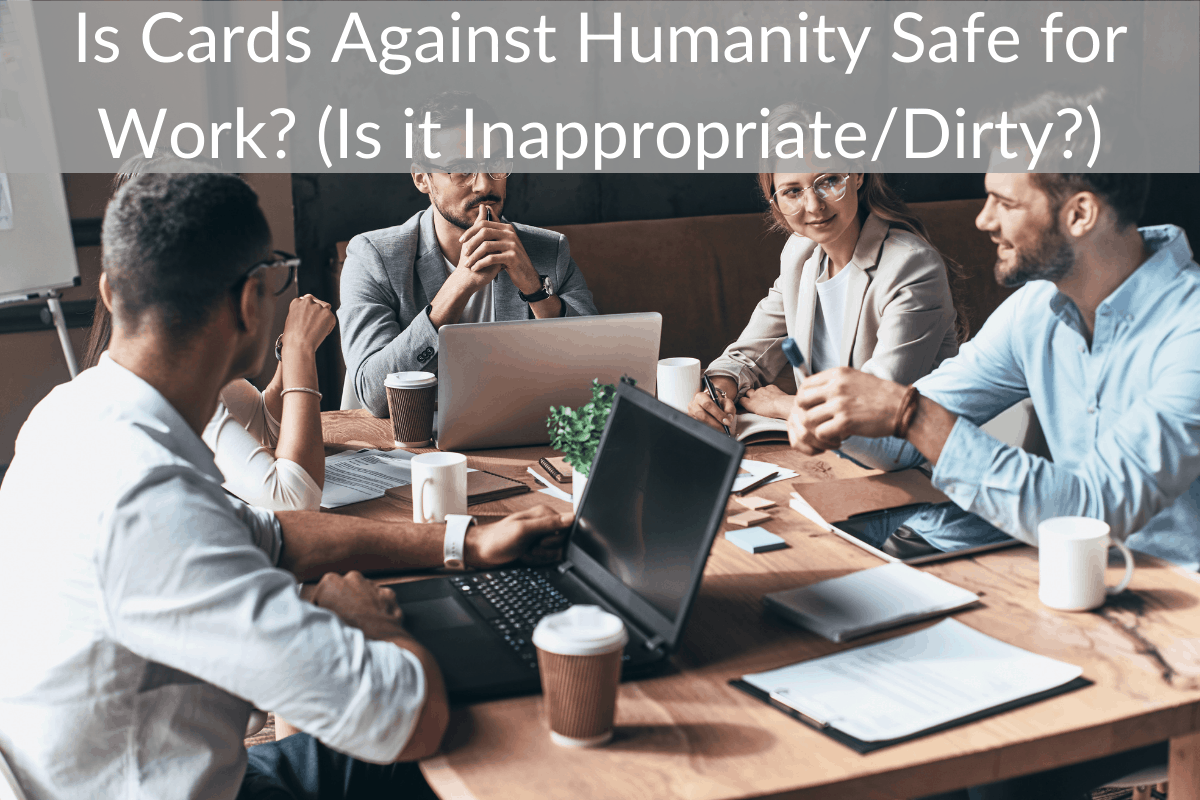 Alright, you are an outgoing, hip, and fun person. You are into the latest trends and you follow all the best TikTokers.

Your swag is top level.

Your friends look to you to stay up-to-date on Pop Culture. You are a social butterfly, and everyone knows when you are around, fun will be had.

How do you stay there?

How do you stay the life of the party? By bringing new life to the party. What better way than an awesome, fun, inviting party game?

Let’s be honest with each other, Apples to Apples just isn’t going to cut it for your work party. You need to be a little edgier, a little more new-school.

You think you found your answer.

It is a fun party game and it has a ton of attention right now as it is a fun game. It has some excitement to it. You know you can get people out of their comfort zone, so why not, right?

Well, let’s look at where we are and where we want to go.

On a professional level, do we really want to talk about the vile and raunchy parts of our life?

Cards Against Humanity isn’t a game that is safe to be played in a work environment simply because of how inappropriate that it can be. Although it is a great game to play with friends and family (assuming they don’t mind being a bit raunchy) it really shouldn’t be played at work.

There is one thing that is for certain with Cards Against Humanity, it is inappropriate and it is dirty. With some friends after hanging out at the bar, sure. With your boss who is evaluating you for your next promotion, probably not the best idea.

So who should you play Cards Against Humanity with?

What is the right environment? That depends on how open you are, and how comfortable you are with locker-room jokes among others.

My suggestion, make sure that whoever you play with is capable of laughing with you, and at themselves.

Which Cards Against Humanity Edition Should I Start With?

After a successful campaign that raised over $15,000, Cards Against Humanity started publishing their game and selling it in retail operations.

The team at Cards Against Humanity has continued to supply their fan base with quality expansion packs that continue to evolve the replay-ability of their main game.

Even with their success and continued growth over the last decade, the team at Cards Against Humanity still offers their base game as a free to download, print-and-play game.

So if you want to dip your toes in the water and test out the game, that would be a great place to start.

If you find yourself enjoying the game, or if you read through the cards and think it would be a blast at your next get-together, you really should start with the main game. It has over 600 cards, and gives a solid foundation on starting the game out right.

From there, you can add expansions as your time and wallet allow. There are over twenty expansions currently available and none are available in a print format like the main game.

Can you Play Cards Against Humanity with your Family?

Let me paint a picture for you.

You are in your mid-twenties, you finished college and started a career. You are successful. You have a bunch of family right around your age, between 18 and 35, that you are close to. You have been since you were little kids. Everyone is hanging out at your new loft apartment downtown.

Everyone is chatting and you decide to break out your new game, Cards Against Humanity. These guys are all young and probably have a similar sense of humor to you. They don’t have weak stomachs. They aren’t kids any more, everyone is an adult.

The setting is about the family you should feel comfortable playing Cards Against Humanity with.

If your family is a little more open minded, maybe you can even have some teenagers included in your game night but should you really include all of your family in with the game?

Should your Grandma and Grandpa at the table pass around white and black cards?

The truth is, you know your family.

If they are up for a night of raunchy, inappropriate, filthy humor; well you should go right ahead. If your family is more conservative, you should probably leave Cards Against Humanity in the car.

There are definitely right times and wrong times to play a game like Cards Against Humanity, and if you want something that might be a little more palatable to your 12-year-old sister or 60 year old mom and dad, try the family edition of the game.

It was released in 2020, and completely re-written to replace the raunchy cards with cleaner, more family friendly humor.

Is There A Safe For Work Version Of Cards Against Humanity?

If you absolutely love you laying cards against humanity and can’t stop yourself from wanting to play it at your next work party then you might be wondering if there is any version of the game that would be safe to play at work.

Currently there is no Cards Against Humanity expansion pack that is designed for playing at work. However, there is a family edition that would be safe to play at work (and shouldn’t get you fired).

Many people are hopeful that CAH will release an expansion specifically centered around work so it can be played at work Christmas parties, New Years Eve parties, or simply around the break room table.

As of yet that hasn’t happened though so your only option is to not play Cards Against Humanity at all when you are at work or to buy the family friendly edition of the game.

Cards Against Humanity is a game written and developed to push the envelope of inappropriateness.

Any social gathering that you feel is accepting of the odd and crazy would be a great place to play Cards Against Humanity.

On the flip-side, anywhere you feel you need to be able to maintain control of your name, image, or likeness, would probably be a good time to keep the black box at home.

With the cards available to play in Cards Against Humanity, it would only be a matter of time before Karen calls HR and you are walking out the door.