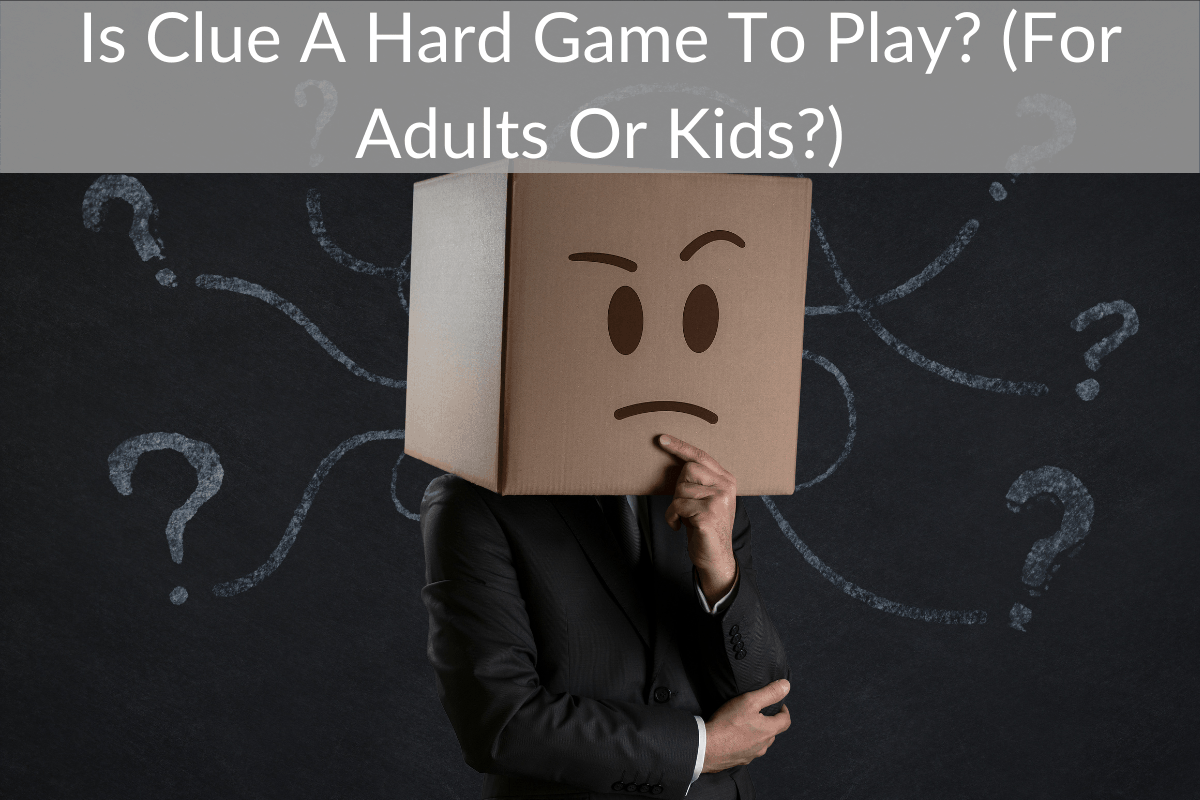 The board game Clue, known internationally as Cluedo, has a fascinating history. Developed in the 1940’s, and released by the publishing company Waddingtons in England and Parker Brothers in the United States, Clue has essentially created a new genre in Pop Culture.

What started out as a mystery board game has evolved into much more. You can find Clue in card games, books, theater, and even a feature-length film that was released in 1985.

You cannot look at the murder mystery genre without considering Clue as its beginnings.

That being said, in this article I will be looking at Clue the board game, and looking at its playability.

In general, Clue is not a very difficult game. The premise is simple, and the actions are easy to follow. Both kids and adults will be able to play the game with minimal issues after the first couple rounds of their first game.

Now, when it comes to winning a game of Clue, that can be more difficult.

Depending on how seasoned of players your competition is, and what strategies they are aware of, it could make it difficult for you to come away victorious.

How Many People Can Play Clue?

The game of Clue is designed around a group of people that are invited to a dinner by Mr. Boddy. When all the guests have arrived and begin to be seated, we find that Mr. Boddy has been murdered.

With that in mind, there are six dinner guests, and each player assumes the identity of one of these guests.

The game of Clue can be a maximum of 6 players and can be played with as few as 2 players. The higher the number of players the more difficult the game will be.

There are 18 clues that need to be dealt to get the game started, so the more people that are playing will mean those clues are spread out to more players.

Different editions of the game will have different player suggestions. Some will suggest 2-6, while others will suggest 3-6. The more players, the more difficult the game becomes.

The game is plenty fun even with just two players.

There are 324 possible solutions to the game of Clue, and there is no way to know from the beginning which one is correct. The more people that are playing the game means that your starting knowledge is lower, and your deductions skills are much more important.

Can You Stay In The Same Room In Clue?

One part of the strategy of Clue is you must be in a room to include it in your suggestion on how Mr. Boddy was murdered.

Moving around the board is an additional variable that must be taken into account while playing.

Some use a strategy of room elimination. They will try to stay in the same room until they can eliminate it from the possible murder location.

However, this strategy is not always the quickest way to play.

Once you end your turn in a room, you must exit it and re-enter the room (or enter another room) before you can make another suggestion, and you can’t exit and enter the room in the same turn.

So don’t let someone try to tell you otherwise. They can’t just stay there and rattle off guesses while not rolling the dice and not moving around the board.

However, what can be done is use the secret passages to get from one room to another on consecutive turns which will allow you to find out which person or weapon was used a lot faster.

Is Clue A Good Game For Adults?

With board game night becoming more and more popular among young adults in today’s society, many people are looking for games to play with their friends.

The board game industry has taken notice, and there have been a lot of new games coming to market, and a lot of those games have a price tag of anywhere from $50 to over $150.

Some families don’t have the disposable income to spend that much on something that is only played occasionally with friends.

This is where some of the older games come in.

Games like Clue, Monopoly, Sorry!, etc. can be found brand new for as little as $10 to $20, and they can be played with your children or adult friends alike.

The worry that some have is that these older, less expensive games aren’t really adult games.

However, Clue’s gameplay is designed in a way that the older your competition is, the more difficult it will be to obtain information and figure out who, with what, and where Mr. Boddy was murdered.

Classic games give you flexibility in who you play with.

Clue is a perfect game to have at the adult only board game night, but is easily played at home with your children, or at family gatherings with your nieces, nephews, and cousins.

Is Clue Fun With Two Players?

Clue has flexibility in how many people can play the game. In fact, some have even come up with unofficial ways to play it alone, but is it fun with just two players?

For an answer to this question, we have to look at how the rules are adjusted for the amount of players.

Every game of Clue begins with one room card, one suspect card, and one weapon card being put into an envelope for the final solution. From there, the remaining 18 cards are dealt out to each player as evenly as possible. That means that in a game of only two players, each will receive nine clues to help them deduce what three cards are in the envelope.

Because there is so much information front loaded to the players, it makes the game much simpler. With nine cards you have a much larger pool of information to start with, and you are essentially starting half-way through the game.

If you really want to play a game of Clue and you only have one available opponent, it can be done. The game is likely to be much shorter, and if you and your opponent are both skilled players, it can even still be challenging; however, most people will say that it is better to play with 4-5 players than 2.

Clue is a fundamental piece of gaming history in today’s Pop Culture. It is a foundation on which many games have looked to for their base and the beginnings of their development. In addition to game designers, it also inspired writers, playwrights, and filmmakers

Clue might not be the hardest deduction game on the market, but it is an original.

One that has provided us with a vast amount of entertainment even outside of its original game design. It is a joy and everyone should have the experience of solving the mystery of Mr. Boddy’s  murder.