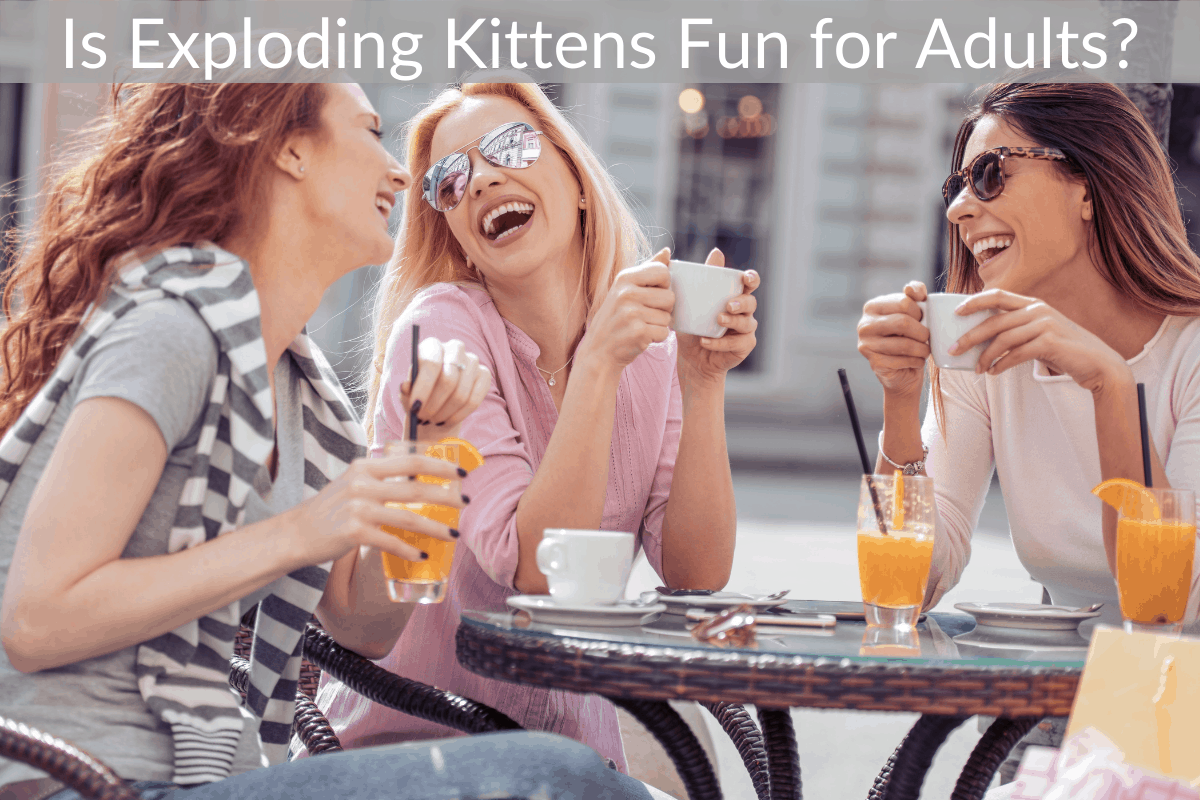 Exploding Kittens is a card game with a sense of humor that is perfect for kids and adults alike.

There are several different versions of the classic game now, so you can pick one or start collecting the entire set of games.

Exploding Kittens can be purchased as a family-friendly version, an adults-only version, and every theme in between, but is it fun for adults to actually play?

Exploding Kittens is fun to play whether you are an adult, teen, or child. The competitive nature makes it fun for anyone (including adults) to play with their friends or family.

The game is also really easy to learn so even if you are older and typically don’t pick up new games very well, this one shouldn’t be a problem for you to play as an adult.

Overall, Exploding Kittens is a great game that anyone that is older than 8 (or so) will enjoy playing.

To see all of the different Exploding Kittens expansion games currently available you can click here.

Who is Exploding Kittens For?

Exploding Kittens is officially recommended for anyone above the age of seven however I personally feel that 8 or 9 is a better age as younger children won’t be able to grasp many of the required strategies to win.

The game itself is versatile in design, combining both luck and strategy. It’s fast-paced enough to keep it interesting, has funny cards to keep kids entertained, and requires enough strategic planning to be interesting for adults as well.

However, since there are several different versions, some sets are designed for older or more specific demographics than the original game is.

For example, there is a not safe for work version of Exploding Kittens that has become a popular adult party game. However, even that version isn’t extremely raunchy and can likely be played with anyone who is a teen or older.

One of the great things about there being so many expansions and versions of the game is that there is a version for everyone.

If you want a one-size-fits all family game night option, the original version is probably your best bet. If you want the option that is most fun for adults, on the other hand, go for the NSFW version.

Where You Can Buy Exploding Kittens

Exploding Kittens is by no means unpopular, so it’s very easy to find in stores and also at many places online.

Popular retail stores like Target and Walmart both carry the game and its various offshoots and expansions as well.

Toy stores and board game stores are also a pretty easy way to find Exploding Kittens quickly and easily.

You can also buy the product online in a few different places. The first place to check is the Exploding Kittens website.

Simply go to the website and then navigate to the shop tab where you can browse through all the games and other products that the company makes.

You can also go to other online retailers like Amazon. Amazon is often a good place to look if you’re trying to save money as you can find deals on this game pretty regularly or buy an open box one to save some money as well.

The best thing to do of you want to save money, however, is by shopping second hand. It might take some more effort, but you can find games for extremely cheap prices if you know where to look.

Thrift stores often have game sections where you can find things like Exploding Kittens. You can also look on used goods sites like eBay, Craigslist, and Facebook Marketplace.

However, when buying used games you have to be careful as sometimes cards will be missing which can effect the gameplay.

How to Play Exploding Kittens

Exploding Kittens can be played in a few different ways. Which set of rules you use will depend mostly on how many people you are playing with as well as whether you are playing the original game or one of the expansions.

The goal of the game is basically to be the last man standing. To start your game set-up, go through the deck and pick out all of the exploding kitten cards. You’ll also want to remove all of the diffuse cards and set them aside as well.

There should be a total of four exploding kittens and six diffuse cards.

Next deal out seven cards to each of the players. Some older versions of the game have incorrectly printed instructions which tell you to deal out only four cards. If this is the case for your instructions, check the Exploding Kittens website for further clarity.

The last steps of set-up will depend on how many players you have.

For a small game, give each player a diffuse card and then put one fewer than the number of players of the exploding kitten cards and two of the remaining diffuse cards back into the main deck and shuffle.

For a larger game, give each player one diffuse card and then put all of the exploding kitten cards and remaining diffuse cards back into the deck. Shuffle and then you’re ready to start playing.

Put the deck in the middle of the players to start playing. Pick someone to go first and proceed clockwise.

During your turn, you can either pass by not playing a card, or play by putting down a card in the discard pile next to the main deck.

The cards all have instructions on them, and some must be played as a pair. To end your turn, draw a new card from the deck.

If the card you draw at the end of your turn is an exploding kitten, you can use a diffuse card to save yourself. If you don’t have a diffuse card then you are eliminated from the game as you “exploded”.

What is Exploding Kittens?

Exploding Kittens is an exciting card game that combines some classic gameplay with a dark sense of humor for an exhilarating and fun game night.

The game consists of 56 cards, which are split up into three groups. There are exploding kitten cards, special power cards, and diffuse cards that you can use to protect yourself from elimination.

It’s one of the newer card games on the market, only coming onto the scene in 2015. It was conceptualized by cartoonist Matthew Inman (aka The Oatmeal) and designer Elan Lee.

All of the new packs included bonus additional kitten cards as well as new action cards to make the game more enjoyable.

Exploding Kittens is a great game for the whole family for a few reasons.

Number one is that it is interesting enough to keep the attention of adults, while being lighthearted enough keep kids entertained and involved.

There are also lots of different versions that make it easy to keep everything in the game new and fun.

Like many of today’s popular games, Exploding Kittens is known just as much for its comedic aspects as anything else. It’s got just enough weirdness to keep you coming back for more.

Since the game is so popular, you won’t have any trouble finding it online or at big retail stores.