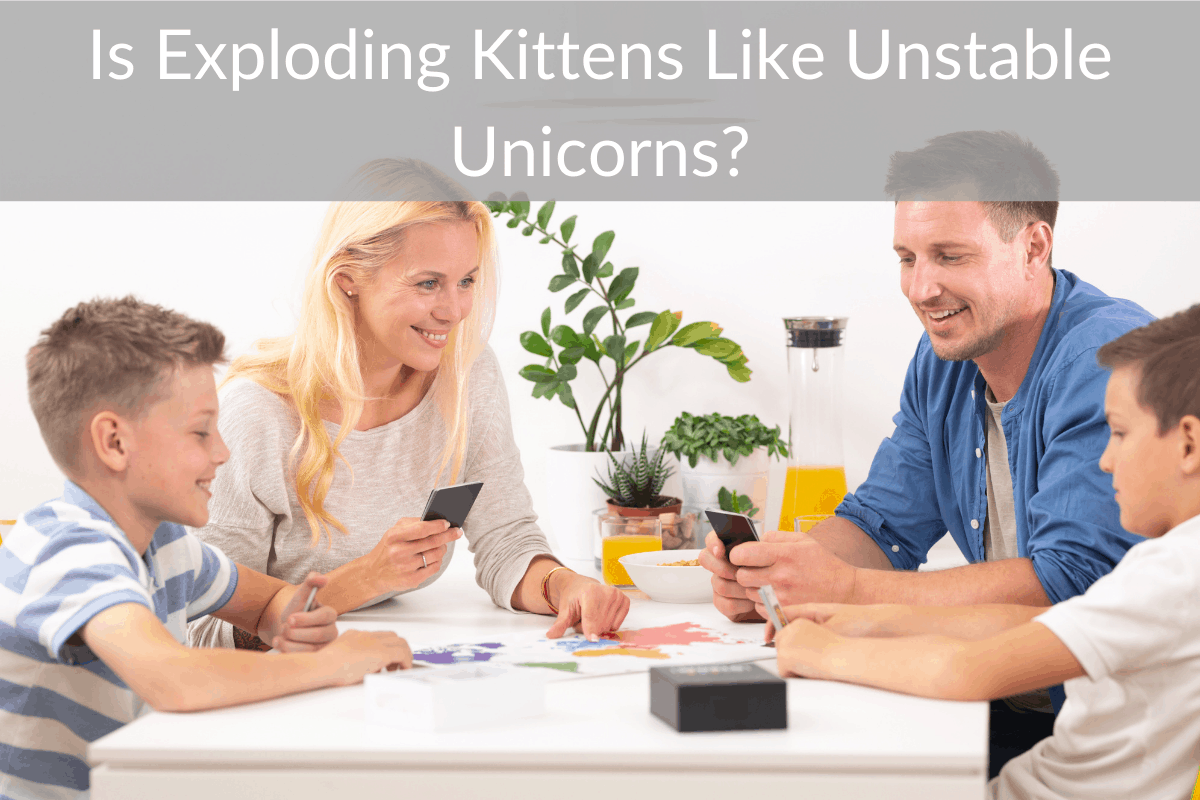 There are many similarities and differences between Exploding Kittens and Unstable Unicorns. The targeted players are teens to young adults but the games are fun for older adults as well.

Exploding Kittens and Unstable Unicorns are both party games, intended for comedy and both are intended for a good laugh.

Exploding Kittens and Unstable Unicorns both have the same strategy of attacking other players and trying to get them “out” of the game. The card management is also pretty similar with collecting cards and playing them in a specified sequence to try and win the game.

In the rest of this article I will go into more details about each of these games so that way you can see the main differences between the two while also seeing what is similar too.

If you want to see other popular games similar to Exploding Kittens and Unstable Unicorns you can find them right here.

What is the Exploding Kittens Game?

Exploding Kittens is a very strategic game that was made around the theory of Russian Roulette. Exploding Kittens uses cards that are decorated with kittens, enchiladas and even goats. Often the cats will have different outfits or things that they do as well.

This is a game that can bring fun for the whole family as it is designed to bring entertainment to adults, teens and children age 7 and up and can support 2-5 players.

The main strategy of the game is that the players draw cards during their turn until an Exploding Kitten is picked , which kills that player and makes them an observer of the game (unless you have a Defuse card in your hand in which case you play that to keep from being blown up and out of the game).

The more cards that are picked from the deck the more the players will have to be on the defensive as it increases the chances of a player drawing the “kill card” aka an Exploding Kitten. This game is basically Russian Roulette with less real world consequences.

What are the Components of Exploding Kittens?

The Original Exploding Kittens Box Set includes 56 cards in the deck. The box is engineered to not meow when you open it as many false claims have stated, but then again, every individual’s brain perception experiences things differently.

Some retail sites state for an age range of 7+ and some state 14+. There is also an adult version targeted for 18-year-old and up and due to the graphic and sexual content is not intended for individuals under the age of 18 but it is more funny than anything.

How Do You Play Exploding Kittens?

During a player’s turn, the player can play as many cards as they choose (or none) but must pick up 1 card from the deck to end their turn. If you draw an Exploding Kitten card a defuse card needs to be played or that player is then “out” and is a spectator of the game (or they can storm off in anger lol).

The last player to be in the game is the winner. The goal is to obtain the most defuse cards which will eliminate one Exploding Kitten that a player draws. You can also get other cards such as Attacks, Skips, See The Future, etc. that will help you avoid drawing an Exploding Kitten card in the first place.

Overall this is a game that has an element of chance but also a lot of strategy involved as well.

What is the Unstable Unicorns Game?

Unstable Unicorns was designed based off individuals who had a love for the game “Cards Against Humanity”. Unstable Unicorn has an apparent twist for competition card games.

This game is about betraying your friends, in a kind way (or so you will say). Unstable Unicorns is a card game where the players collect unicorns to add to their “stables”. The twist comes in, while collecting unicorns the player plays cards to “betray” the other players.

The target age range is 14 years old and up and designed for 2-8 players and gameplay takes approximately 30-45 minutes to finish the game.s

The way to win the game is to have 7 unicorns in your play area aka “Stables”. During play, sabotaging the other players is the strategy to winning the game as being nice is not rewarded in this game.

What are the Components of Unstable Unicorns?

The Original Unstable Unicorn Card Game comes with a magnetic closing box, 135 playing cards and the rule book. Just keep in mind there are expansion packs to add to it and make it more interesting.

The object of the game is to collect unicorns while basically producing obstacles for the other players. The collection of unicorns is collected in what is called a stable (hence the name) and when the first player has 7 of these unicorns, they are the winner.

How Do You Play Unstable Unicorns?

Unstable Unicorns comes with 3 types of cards. The reference cards which are separated from the other cards during set up. The white cards, each player is given 1, these are the baby unicorns. Each player then gets 5 of the black cards and these are part of the pile you pick from during your turn.

During your turn you can either play a card or pick a card from the pile. Each card will give directions on what to do. There are also magic cards which is where you sabotage one of the other players.

Most of the card types have the potential to damage your opponent’s chances of winning and this is where being nice to the other players is not going to help you win. Only the Instant card and the magic card are added back to the gameplay pile.

These 2 card games are alike in the way that your intentions are to sabotage the other players. They do both have similar traits but also have a wide variety of differences.

The goal of Exploding Kittens is to kill you and remove your opponents from the game while the goal of Unstable Unicorns is to attack your friends and family so you can get Unicorns in your stable first.

Both are all in tons of fun but watch out for that Exploding Kitten and that Magic card!